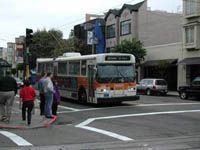 A week and a half after service cuts affected SF Muni routes still finds riders disoriented. “I don’t know where the 26 Valencia picks up,” said a transit commuter, Marsha Villalobos. “It used to pick up near my house but now I think it stops at Balboa Park.” Villalobos was at the Stonestown M line station. The 26 Valencia no longer runs south of Balboa Park BART. For SF State students located in the Mission it means sometimes routing through two providers, BART and Muni. The one way trip cost is $2.75 to and from 24th St. & Mission St. – it used to be $1.25 and a straight ride on the 26.

“There has been some confusion about bus service but I think it’s being cleared up,” said a Muni driver who preferred to remain anonymous. “Drivers are more used to their new routes now then they were weekend before last. A couple articles came out with the new stops and the website has updates.” The Muni website, www.sfmuni.com/changes has a comprehensive list of service and frequency changes.

The service cuts and the fare hike have not stopped San Francisco from riding. Last year the city tied with Boston, just behind Washington D.C. and New York for public transit use. A weekday visit to the Muni Metro Civic Center platform at 5:02pm echoes scenes of the Tokyo metro where white-gloved platform attendants shove commuters into cars. “Watch it!” growled a jostled rider to the crowd around him, “I don’t like people pushing!”