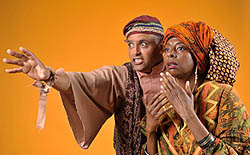 There is nothing quite like kicking off your summer in Dolores Park with the Tony Award-winning San Francisco Mime Troupe. I don’t think I’ll ever forget the hilarious “Obscuristan” of 2007. The SFMT returns and celebrates its 50th Anniversary season with a song and dance satire of monumental proportions, TOO BIG TO FAIL. Wilma Bonet directs Velina Brown (Veronique of the Mounties, Red State), BW Gonzalez (Seeing Double), Ed Holmes (Seeing Double, Making a Killing), Lisa Hori-Garcia (GodFellas, Red State), Adrian Mejia (Red State), and Michael Gene Sullivan (GodFellas, Making a Killing) in this odyssey through the twists and turns of banking bureaucracy and international finance. Written by Michael Gene Sullivan and Ellen Callas, and featuring a live band under the direction of Pat Moran (music and lyrics), TOO BIG TO FAIL plays July 4 through September 27 (press opening: July 4 at Dolores Park in San Francisco) throughout the Bay Area in San Francisco, the North Bay, East Bay, South Bay and Peninsula, and the Central Valley.

Told in the tradition of the West African Griots, this modern day epic follows Filiji, a man in love with his family, his village, and most of all, his goat, Bamuso. What more could a man need to be happy? How about two goats? Three? A flock? Turned down for a loan by the village micro bank, Filiji, now the self-proclaimed Goat Lord of Kanabeedomo, borrows from a new lender in town, a small subsidiary of a much bigger bank in a distant, mystical land called Wall Street. When the economy takes a sudden turn for the worse, the bank gets desperate and calls in Filiji’s loan.

Housing is down, credit is down, dividends are down, and like any Ponzi scheme, a constant flow of cash is essential, but where will it come from? Is it simply enough to let Filiji pay his small debt, or have the Wall Street big-wigs stumbled upon the latest, greatest investment bubble to exploit – goats? How will Filiji save himself and his collateral, the beloved Bamuso? Can America be shifted to a goat economy? How did all of the greed get started, and more importantly, how the hell can we turn it off?

Founded in 1959, the San Francisco Mime Troupe creates and produces socially relevant theater; their work is political satire and anything but silent. Winner of three OBIE awards and a Tony Award for Excellence in Regional Theatre, the San Francisco Mime Troupe, about which The New York Times stated, “Anyone concerned about the state of global politics — and about the state of political humor — should listen to the Mime Troupe’s message,” creates plays that make sense out of the headlines, close-up stories that make audiences feel the impact of political events on their personal lives.

The New York Post called the Mime Troupe “America’s oldest and finest street theater,” with the The Boston Globe concurring, “You’re never only watching a political theater piece, but rather a double barreled re-invention of politics and theater at once.” To make this work accessible to the broadest audience possible, the Mime Troupe performs as a regional touring company, presenting their work at a price everyone can afford: free.

Thanks again to the SFMT for supplying virtually all of the information provided above. All shows are indeed free and open to the public (unless otherwise noted). For a complete schedule and more information, the public may call 415.285.1717 or visit www.sfmt.org.

TONY AWARD-WINNING SAN FRANCISCO MIME TROUPE
CELEBRATES 50TH SEASON WITH RECESSION-PROOF SATIRE
“TOO BIG TO FAIL”
The Epic of Gilgamesh . . . The Odyssey . . . Jason and the Argonauts . . . Filiji and his goat.