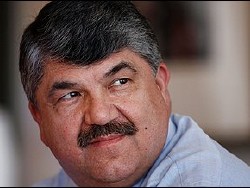 In a further sign of SEIU’s growing estrangement from the labor movement, the San Francisco Labor Council has rejected SEIU’s threat to withdraw 40% of its Council funding unless UNITE HERE Local 2 drops its support for NUHW’s decertification campaign against SEIU’s home health care workers. At an August 21 Executive Board meeting, representatives of several unions took turns castigating SEIU-UHW Trustee Dave Regan for threatening the Council’s funding, while praising Local 2’s historic commitment to worker rights. Although Regan had threatened the “immediate withdrawal” of SEIU’s $17,000 monthly Council contribution during an August 15 meeting with Local 2 officials, he now denied that SEIU had decided to withdraw funding. Instead, he said that he had requested to meet with Local 2 to see how SEIU-UHW could help UNITE HERE in its contract fight against San Francisco’s hotels. Most striking about the meeting was the widespread criticism of SEIU’s bullying tactics, and the strong defense of Local 2’s efforts to help NUHW decertify SEIU’s local home health care workers.

As the epicenter of labor’s internal wars shifts to San Francisco, SEIU now finds itself in deep trouble with the powerful San Francisco Labor Council. Labor officials were angered by SEIU’s threat to withdraw its Council funding, and did not respond well to what Teachers Union President Dennis Kelly described as “the two faced-ness of (Dave) Regan’s presentation and by the threats and bullying.”

The Council was brought into the SEIU-UNITE HERE fight after Dave Regan told Local 2 officials that SEIU was withdrawing its monthly per capita contributions “effective immediately” in retaliation for Council President Mike Casey’s support for NUHW’s campaign to decertify SEIU’s local home health care workers. Although Regan denied at the Council meeting that any decision to withdraw funds had been made, I confirmed with Local 2’s Northern California Organizing Director Tho Do that her notes of the Regan meeting confirmed that he said SEIU’s dues would be withdrawn “effective immediately.”

Not wanting to have his individual union’s decisions negatively impact the Council, Casey began the August 22 meeting by offering his resignation as President. It was unanimously refused, with much of the Council irate over SEIU’s tactics. John Ulrich, of United Food and Commercial Workers 101, told the Council, “for SEIU to continue to try and extort CLC’s (Central Labor Councils) over issues is terrible.” Ulrich stated that he “belongs to four Labor Councils, and SEIU has pulled this kind of threat in three of those councils many times over the years over different issues.”

Casey made it clear that he felt that NUHW “is the true voice of homecare workers in California,” and that “it was Sal Rosselli, former UHW staff and the union’s rank-and-file leadership, not SEIU, who did the work on behalf of homecare workers in San Francisco.” In an ominous sign for SEIU’s relationship to the broader labor movement, nobody criticized Local 2’s support of NUHW’s de-certification. Nor did any dispute Casey’s crediting Rosselli’s team for the gains of the home health care workers who will soon be choosing between SEIU and NUHW as their representative.

In order to protect its finances, the Labor Council has initiated a “Solidarity Pledge” whereby unions are being asked to agree to provide additional funding so that if SEIU leaves there will not be a shortfall. Plumbers chief Larry Mazzola, who announced at the end of the August 22 meeting that his union would “step up” to fill any funding gap, kicked off this strategy.

According to Labor Council Vice-President Conny Ford, since Mazzola got the ball rolling the solidarity pledges are “going great.” Ford told me that in response to her single e-mail message about the pledge, “people are either signing up or saying that they are awaiting ratification of the proposed dues increase from their executive boards.” Ford said she had not heard from a single union that they did not want to pledge higher dues to protect the Council from SEIU’s withdrawal.

In addition, Local 2’s support among other unions continues to grow. IBEW 1245 Business Manager Tom Dalzell is providing Local 2 with two fulltime organizers to help on its contract fight, and is also providing the services of longtime former SEIU organizing strategist Fred Ross, Jr., who now works for IBEW.

As the AFL-CIO convention opens on September 13, the union unity exhibited at the San Francisco Labor Council over the dispute between SEIU and UNITE HERE could well emerge at the national level. SEIU’s former Change to Win partners at UNITE HERE and the Laborers Union are negotiating to rejoin the AFL-CIO, and the UFCW – whose San Francisco representatives strongly backed Local 2 against SEIU — may not be far behind.

Incoming AFL-CIO President Richard Trumka recently gave an interview in the Las Vegas Sun in which he vowed to move labor in a different direction than that promoted by SEIU President Andy Stern. Trumka noted “the difference between me and (Stern) is that he believes you can look at that system and play within that box by accommodating employers. I believe that the system has to be changed because it’s designed for employers to win and workers, every time, to lose.”

Whereas Dave Regan told the Labor Council that this “tag line” about SEIU and “top down unionism and corporate unionism” hasn’t “been his experience,” most labor leaders are not happy over SEIU’s vaunted “partnerships” with Wal-Mart, Big Pharma and other corporate interests. Trumka and international union presidents are increasingly joining UNITE HERE and NUHW’s critique of SEIU’s approach, which could soon result in a labor movement with nearly all unions on one page and SEIU on another.