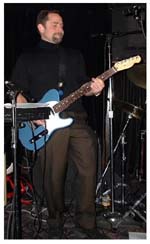 After several years as drummer for the Sunnyvale group the Orange Peels, Moremen left that band to pursue his music on his first love, the guitar. His relationship with the roots-rock flavored LTH goes back to Washington DC, where Brace was music critic for the Washington Post’s Nightwatch column. Originally from the DC area, Moremen moved to SF some 13 years ago, and has managed to keep his ties to some of DC’s finest musicians. His “California” style leads and Beatles influences can be heard on his telecaster, and have made Moremen a much sought after guitarist, so much so that Brace immediately thought of him for his west coast swing.

Alongside other roots-rock groups from the nation’s capital, like Eddie From Ohio and the Grandsons, Last Train Home is one of the most popular bands in the DC area, and their recent move to Nashville has only increased their growing following. Brace has hosted the popular PBS program MHz, and his knowledge of music and history shows in his understanding and musicianship. Joining LTH will definitely be a fun reunion for Moremen & Brace and their camraderie, history and chemistry on stage will be something to look forward to.