SF DOCFEST—“BLACKSTAR: AUTOBIOGRAPHY OF A CLOSE FRIEND,” “THE WOMEN AND THE PASSENGER,” “TERMS AND CONDITIONS MAY APPLY” 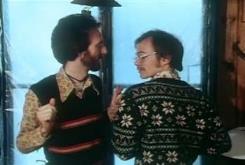 This year’s San Francisco Documentary Film Festival (hereafter “DocFest”) sets aside June 16 for a marathon retrospective of the entire oeuvre of gay filmmaker Tom Joslin. This marathon of politically charged personal films consists of only three movies, as the filmmaker died of AIDS at a relatively young age.

The most familiar of the three films being screened is Joslin’s Sundance award-winning AIDS documentary “Silverlake Life: The View From Here.” But the relatively unknown first film in the retrospective, “Blackstar: Autobiography Of A Close Friend” (hereafter “Blackstar”), shows the promise of Joslin’s talent.

This 1977 film tosses the autobiographical film portrait headfirst into an intellectual hall of mirrors. Rather than presenting a string of neatly packaged incidents, Joslin plays with the audience’s ability to understand his life. Onscreen titles or even excerpts from a vintage Mickey Mouse cartoon provide critical commentaries regarding Joslin’s parents. The only clue offered to a vaguely described 1970 sojourn in Kittery Point, Maine, is footage capturing the bucolic passage of time at that place.

Joslin is less interested in frustrating the audience and more concerned with prompting them to question the accepted authority of the autobiographical film. How can an autobiographical film offer a complete picture of a subject’s life when that subject decides what will be revealed onscreen? As an extended sequence in Joslin and lover Mark Vassey’s bedroom shows, the verite presented in “Blackstar” is an artificial construct fit only for ridicule.

Two particular moments directly challenge the straight viewer’s feelings about gays. It’s more likely straight male viewers will stare at dancing hulu girl footage rather than closely listen to a gay liberation polemic. Joslin’s mother’s self-conception of being open-minded about gays because she saw “That Certain Summer” gets undermined by her non-supportive behavior towards Tom and Mark’s efforts to build a home together.

“Blackstar”’s lack of a triumphal ending feels like an honest yet brave declaration. Tom and Mark are a couple because they worry about bills or try to start a balky mini-chainsaw in snowy weather. Yet declaring their relationship in the face of societal denial means not caring about waiting for society to change its mind.

The setup for Patricia Correa and Valentina Macpherson’s award-winning documentary “The Women And The Passenger” uses a startling idea which seems obvious in retrospect.

A Chilean sex motel provides the film’s setting. Yet the focus is not on the clientele (aka “passengers”) who come to use the motel’s rooms. Their voices are captured, but the camera never shows their faces. Instead, Correa and Macpherson focus on the motel maids (the titular women) who provide the passengers with food and drink, then clean the rooms after its users have had sex.

Many of the film’s best moments come from seeing the maids’ amusingly blasé attitudes towards their customers’ trysts. Unusual situations, such as the handsome passenger seeking a masochistic encounter, may prompt eavesdropping. But their more common reaction can be summarized by seeing one maid idly flipping through a magazine while waiting for one couple to come to climax.

DocFest’s Closing Night Film turns the stuff of dry corporate legalese into a disturbingly entertaining look at how Facebook and Google use built the American surveillance state. In Cullen Hoback’s “Terms And Conditions May Apply,” voluntarily submitting personal information to social media sites leads to far from innocuous consequences.

The detailed technical language in the terms and conditions of user agreements understandably render the material inaccessible for the average user. As the film notes, actually reading through what one agrees to on Internet sites would require spending 180 hours yearly. Yet those simple “I Agree” clicks cumulatively cost ordinary citizens annual losses of $250 billion thanks to details hidden in these agreements’ fine print.

Facebook may be a free service. But Hoback suggests the company’s real revenue stream comes from commercially exploiting users’ voluntarily given personal information. Innocent public discussions of one’s personal tastes also flag your suitability for employment or the advertisements you’d see. Austrian law student Max Schrem posted on Facebook once a week. Yet the company’s response to Schrem’s inquiry revealed he’d generated over 1,000 pages of (redacted) documents on his activities.

Hoback’s film may present its message in an average manner. Yet that fault of craft shouldn’t excuse ordinary citizens from aggressively preserving their online privacy.