SF in Denial on Housing, Homeless 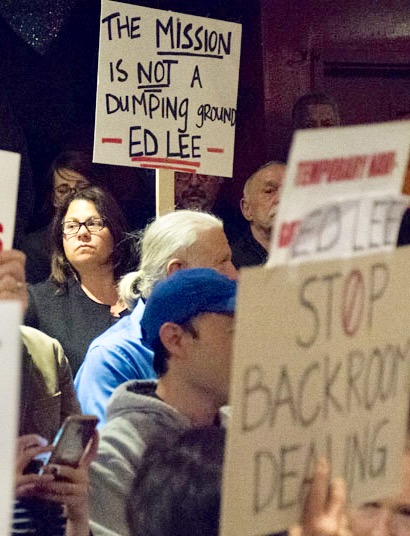 In an April 13 meeting with homeless service providers, activists and city officials , San Francisco Mayor Ed Lee said that he has told each Supervisor that they should accept a Navigation Center in their district. Echoing comments by Supervisor Jane Kim who also attended the meeting, Lee made it clear that all of San Francisco must do its fair share if we want to reduce the number of people living on the street.

Soon after Lee’s comments a large crowd of Mission District residents and small businesses came to a community meeting to discuss plans for a six month Navigation Center at 26th and Mission. Called by Supervisor Hillary Ronen, opposition to the short-term shelter (the site will then become housing) was fierce. It came not from the tech workers and neighborhood newcomers who some activists believe are wrecking the Mission; instead it came from some with deep roots in the community.

What does it mean when some residents and businesses in one of San Francisco’s most progressive districts strongly oppose a new Navigation Center? It says that many San Franciscans are in deep denial about the homeless crisis. They do not want people camping on sidewalks, but oppose  relocating them to a shelter anywhere near their home or business.

I recently called for a “fair share” law  for homeless services after a SF Chamber of Commerce poll found 77% of San Franciscans support Navigation Centers in their neighborhood. But the opposition to a short-term Mission shelter tells me that what people told pollsters may not reflect their actual views (though it could also mean that the Mission opposition came from a vocal 23% minority).

No Nav Center in D5

People at the mayor’s meeting painted a very disturbing picture of a worsening homeless crisis in the Haight Ashbury. Yet no Navigation Center has been proposed for the district. To my knowledge Board President and Supervisor London Breed has not pushed any sites for opening such a facility.

If the city can’t “find” space in D5 for a Navigation Center, the notion that each supervisor must support homeless services in their districts becomes a bad joke. Because there is no way you are going to convince Mark Farrell in D2 to stop opposing homeless services in his district when D5 is not doing its share.

A D5 Navigation Center is not going to happen unless Breed gets behind it. If she does, it could send a powerful message to other supervisors that it’s time to actually walk the talk on reducing homelessness.

As for those complaining about camping yet opposing new shelters? It appears what they really want is for homeless folks to just disappear.

That’s what it means to live in denial.

A lot of San Franciscans are also in denial about housing.

According to what Kate Hartley of the Mayor’s Office of Housing told the Planning Commission last week, there are 6000 permanently affordable housing units in the pipeline in San Francisco. That has to be the largest number ever.

Promoting such a affordable housing only plan is truly a case of denial.

Combine this opposition to new housing with the opposition to increased density proposed in Supervisor Katy Tang’s Home SF plan. After years of complaints that the Westside refuses to build its share of housing, Tang’s proposal finally facilitates this.

But instead of backing this as a major housing breakthrough, some housing activists oppose the measure. They think “just saying no” to market rate new housing will keep affluent newcomers from living in San Francisco. They believe that if those wanting to buy in San Francisco cannot buy a new unit they will not obtain such housing through owner move in or Ellis evictions. Instead, they will just give up on living in San Francisco and move to Oakland without a fuss.

Eviction statistics say otherwise. San Francisco’s recent decline in OMI and Ellis evictions in the wake of new housing shows that the availability of new market rate housing actually protects rather than endangers existing tenants. The “market rate housing promotes gentrification” argument accurately applies to many low-income neighborhoods across the nation, but none in already expensive San Francisco.

San Francisco needs more housing and homeless services. Denial should not be an option.

Randy Shaw is Editor of Beyond Chron.  His latest book is The Tenderloin: Sex, Crime and Resistance in the Heart of San Francisco