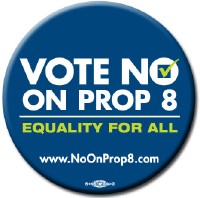 In the final stretch of this election, Proposition 8 is dangerously close in the polls—after months of it being safely behind. With massive out-of-state funding, including $8.4 million from the Mormon Church, the “Yes on 8” campaign has scared many swing voters into falsely believing that marriage equality will intrude on their religion and indoctrinate their children. And while the San Francisco Chronicle took a formal position against it, the paper’s news coverage—which has a far greater impact than its editorial endorsements—has actively pushed a meme that helps Prop 8’s message. Over the last two weeks, the paper has treated a first-grade teacher’s wedding as front-page news, repeated the line that Gavin Newsom is a liability and that San Francisco is “so different” from the rest of the state, and fomented divisions within liberal constituencies that give wavering voters an “out” in supporting Prop 8. With the stakes in this election higher than virtually any other race, the Chronicle should not think that merely opposing Prop 8 can absolve them of responsibility should it pass on November 4th.

When the state Supreme Court ruled that all couples have the right to marry, I boldly predicted that Prop 8 would fail. Once swing voters started seeing their friends, neighbors and relatives get married, I reasoned, attitudes would evolve and the measure would go down—as it has changed opinions in Massachusetts. The “No on 8” campaign’s basic message is that regardless of how one may feel about same-sex marriage, no group should be singled out of a basic right—a position that swing voters can respect and relate to.

The “Yes on 8” campaign knew they could only win if they changed the subject, so with heavy financial backing from the Mormon Church have flooded the airwaves with blatant lies and scare tactics like “churches could lose their tax-exempt status” and “children in public schools will be taught gay marriage—even if parents object.” Now some swing voters who say they have “no problem” with gay people are afraid that marriage equality will “indoctrinate” their children and interfere with religious practices. And once voters are afraid and don’t trust you, it’s a lot harder to make them listen to facts that refute it.

So why did the San Francisco Chronicle make its front-page story on October 11th about a first-grade class attending their lesbian teacher’s wedding? Going to see your teacher get married is nothing new, and certainly not front-page material. When I was in second grade, a (straight) teacher at my school got married. Not only did her students attend the wedding—they even sang at the wedding. I don’t fault the school for bringing the first grade kids to the lesbian wedding—which, by the way, had the blessing of each child’s parents. But putting it on the front page of the Chronicle gave the “Yes on 8” campaign what they needed: a visual that gays are “indoctrinating” young children.

According to Jill Tucker, who wrote the Chronicle story, the parents who organized the trip actively sought media coverage—and the paper decided on its own that it was “news” enough to deserve front-page treatment. But the Chronicle didn’t have to accept their solicitation. If this was 2004, when San Francisco conducted same-sex weddings in defiance of state law, it probably would have been newsworthy—despite resulting in the same right-wing backlash. But now that gay and lesbian weddings are sanctioned by the Supreme Court, a wedding is really not noteworthy. Prop 8 opponents can point out the kids had their parents’ consent to attend, but the damage was done to scare swing voters.

One might excuse the Chronicle for a temporary lapse in judgment. But its coverage of Prop 8 over the past two weeks has consistently framed San Francisco Values as freakishly out-of-touch with the rest of California—just like they did before on other issues.

An October 14th story described Mayor Gavin Newsom as “everyone’s worst nightmare” because the “Yes on 8” side used his Supreme Court victory speech in one of their ads—as if now we should never applaud a court decision. John Diaz even lectured Newsom that what draws cheers in San Francisco won’t “play well in Redlands or Redding”—as if those two Republican cities are more representative of California than San Francisco. No Democratic statewide candidate, by the way, ever does well in Redding or Redlands—so don’t be surprise when Newsom fares poorly in those parts for his gubernatorial bid.

Newsom himself only reinforced the Chronicle’s meme by keeping a low profile during the Prop 8 campaign. He did speak at the “No on 8” campaign office kick-off in the Castro, but (half-jokingly) described San Francisco as “forty-seven square miles surrounded by reality.” So according to our own Mayor, San Francisco isn’t the “real” America? As far as I’m concerned, that sounds too much like how Republicans are talking these days.

On October 22nd, the Chronicle had another front-page story about Prop 8. Pursuing a narrative that only gives cover to swing voters for voting against marriage equality, John Wildermuth quoted a 29-year-old student who said she had gay friends—but argued she could “still love these persons and be for Prop 8.”

Why is that dangerous? Because supporters of Prop 8 claim their measure is not about hate—but rather about preventing one group from “imposing” their lifestyle on the rest of us. Swing voters like to think of themselves as tolerant (but they’re uncomfortable with anyone indoctrinating them), and such a line gives them the perfect “out” to say they can vote for Prop 8 without being bigots. Wildermuth, however, never used his article to ask an obvious question: how can you “love” gay people while taking away their rights?

But that wasn’t even the worse Chronicle article that day. A companion piece about each side in the Prop 8 fight targeting African-Americans only further legitimized the fearful aspects of that community. The piece pictured a black woman wearing an Obama shirt and holding a “Yes on 8” sign—without mentioning the irony that Barack Obama strongly opposes Prop 8. If the Chronicle asked her about that, her answer didn’t make it in the article.

The piece also uncritically quoted a black minister, who explained his position in favor of Prop 8 by saying: “you didn’t see very many blacks getting married in San Francisco.” The Chronicle could have pointed out that (a) San Francisco has a relatively small black population, (b) gay couples can now get married anywhere in the state, and (c) there are about 7,400 African-American gay couples living in California. As Harrison Chastang has written, the black community today is less riled up to oppose same-sex marriage than four years ago.

Under the auspices of “journalism,” the Chronicle painted a picture that implies black voters—who will be voting in droves for Barack Obama—will help pass Prop 8. Never mind that this coverage only brings out the worst aspects of fear and ignorance, at a time when black marriage equality supporters are working hard to educate their community about this critical issue.

Proposition 8 isn’t your run-of-the-mill electoral fight where armchair pundits can reduce the coverage to “who’s up” and “who’s down” like they do for candidate campaigns. The stakes are much higher here because it’s a constitutional amendment—and one that will have a far more lasting effect on the lives of ordinary people. Politically, passing Prop 8 passage could be a disaster for marriage equality supporters—turning back the clock on this civil rights movement for many years. That’s why the Chronicle needs to be very sensitive on how they analyze the issue, without fueling lies and misconceptions.

The Chronicle may have taken a formal “no” position on Prop 8—as have virtually every major newspaper in California. But its news coverage will have a much greater effect on the outcome than the paper’s oft-ignored editorials.

EDITOR’S NOTE: Outside of work hours and on his own time, Paul Hogarth has phonebanked for “No on 8” at their campaign office in the Castro—and urges Beyond Chron readers to do the same.