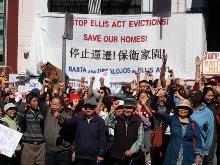 On March 3, SF Gate had a 31-photo slideshow designed to show how “you know your neighborhood is being gentrified.” But none of the photos showed longterm tenants being evicted from their homes, or any of the tenant displacement that defines “gentrification.”

The Chronicle has reached an embarrassing low with its identification of “gentrification” with yoga studios, craft beers, Sunday brunch, juice bars and even bicycle shops, racks and lanes. It even suggests that “graffiti replaced by organized street murals is one of the more beautiful early signs of gentrification,” ignoring the many low-income residents who often participated in their creation. Precita Eyes Muralists opened in 1977 and the organized street murals of the Mission District, a longtime source of resident and community pride, began in the 1970’s, well before fears about gentrification.

While the Chronicle finds “signs” of “gentrification” in activities associated with healthy living, the real evidence of “gentrification”—-Victorians undergoing renovation, the demolition of sound rental housing, the eviction of longterm tenants—are not shown.

Considering how many photos of the Lee family eviction were tweeted, sent by Instagram, and posted on Facebook, the exclusion of the real faces of gentrification was not due to their lack of availability.

The Real Signs of Gentrification

San Francisco knows what real gentrification looks like. And its not about Sunday brunch.

In the South of Market, a slideshow about gentrification would have photos of Redevelopment Agency bulldozers demolishing low-cost SRO’s and transforming a former Skid Row into an affluent neighborhood.

In the Haight-Ashbury, it would have photos of contractor’s trucks and for sale signs outside hundreds of buildings whose landlords evicted working-class tenants under a city code enforcement program known as RAP. Haight gentrification was also signaled by block after block of scaffolds for the painting of historic Victorians, and by long lines in front of buildings for those seeking a flat.

Noe Valley would have the same photos of gentrification, though the lack of a RAP program slowed the process and avoided the mass evictions that spread through the Haight.

Similar photos would document the gentrification process in the Mission District from Guerrero to Dolores Streets. In the early 1980’s it seemed that every block of Guerrero and Dolores had a major upgrading underway.

My daughter spent the summer of 2006 working and living on 127th Street and Lenox in Harlem. When I visited I knew that gentrification was coming as nearly half the buildings on the block were undergoing major renovation.

The Chronicle’s signs of gentrification assumes that healthy living is only for the gentry. That’s why its equating increased bike ridership with “gentrification” is so absurd.

My organization, the Tenderloin Housing Clinic, is currently working with the SF Bike Coalition to get bike paths on Turk Street and Golden Gate Avenue. SRO tenants are excited about the plan, and nobody has suggested this is a step toward tenant evictions, displacement or gentrification

Similarly, when did yoga or healthy juice bars become only for the affluent? Many view yoga as the best way to stay in shape, and natural juices are far healthier than sugared soda. The Tenderloin Healthy Store Coalition has worked to bring healthier foods to the Tenderloin; little did we know that such efforts were signs of impending “gentrification.”

If the Chronicle really wanted to depict signs of gentrification, there is no shortage of photos of tenants facing Ellis Act evictions they could have used. They could also do an entire slideshow on the current living situations of those who have been evicted under Ellis, highlighting those living in less desirable neighborhoods and apartments while paying much higher rents.

A real gentrification slide show should include the Sausalito mansion of the serial Ellis evictor behind Urban Green, CEO David McCloskey. A great photo would be to juxtapose McCloskey’s face with those of the elderly victims he preys upon.

I don’t recall seeing photos in the Chronicle of the multiple buildings Ellised by Sergio Ianturno, Sean Whelan, and other speculators for profit. That would make a great slideshow, particularly when connected to faces of those they displaced.

By transferring blame for gentrification to coffee shops and craft breweries and away from those profiting from throwing the non-gentry out of their homes, the Chronicle unwittingly tipped its hand as to how trivial it views the real human hardships of those evicted and displaced.

Randy Shaw is Editor of Beyond Chron. His new book is The Activist’s Handbook, 2nd ed.: Winning Social Change in the 21st Century