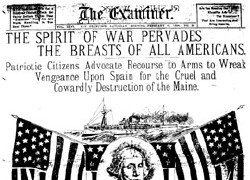 In a shocking display of yellow journalism that would make William Randolph Hearst blush, the San Francisco Chronicle and Los Angeles Times both slapped on their front pages yesterday a complete non-story in California tax law. Our state is in a fiscal crisis, Republicans refuse to let us pass a single tax increase whatsoever, we don’t tax oil companies for their profits, and the legislature just passed a budget that makes $15 billion in dreadful cuts to education and health care, and $11 billion in reckless borrowing. Yet, both papers are alarmed that – due to a technicality in state law – your taxes may go up another $40 this year. California’s income tax brackets get adjusted annually to account for the Consumer Price Index, and it means this year some incomes will fall into a higher tax bracket. Even the President of the right-wing Howard Jarvis Taxpayers’ Association admitted that it’s not a big story, but the Chronicle and L.A. Times chose to whip up their readers with headlines like “State to Reach Even Further into Taxpayers’ Wallets.” Why exactly are they doing this, and what is their hidden agenda?

One of the biggest challenges in California state politics is the complete absence of media coverage to critically assess what goes on. It’s easy to hear what goes on nationally, with all the TV stations, newspapers and blogs keeping close tabs on Washington. And folks can go to City Hall because it’s nearby – and the local press can follow a story that can hold the Mayor accountable. But Sacramento? Forget it. We hardly ever hear about the state government, and voters have a far lower consciousness about state politics – which makes the occasional front-page story in a local newspaper that much more influential.

Yesterday’s SF Chronicle had a huge banner headline on the front page that read, “Deflation = Higher Taxes.” And the Los Angeles Times had a huge front-page story on the upper left-hand corner (i.e., prime real estate in a newspaper) announcing the state would be reaching “even further into taxpayers’ wallets.” Most people who see the headline won’t read the article – and with public approval of Sacramento at an all-time low, it will only feed into voters’ cynicism. Once again, they will think, those jerks in state government keep raising our taxes, as we suffer in this bad economic climate.

Of course, what the papers refer to is much ado about nothing. In 1982, voters passed a proposition requiring the state to readjust income tax brackets each year – based on the Consumer Price Index. Because we normally have inflation, that means tax brackets inch upwards each year – so a person with the same income two years in a row could end up in a lower tax bracket in the second year, giving them an effective tax cut. But this year, the recession has produced deflation – and for the first time in decades, the tax brackets will be adjusted downwards. That means some people may end up paying higher taxes.

How much of a practical effect will this “deflation tax increase” have? Not much. First, the only people impacted will be those whose incomes teeter on the edge of California’s tax brackets. Even if you’re one of those “unlucky ones,” you won’t see a big difference. A single person making $34,000 will see their tax go up $18, according to the Franchise Tax Board. A married couple making $90,000 will have their tax bumped up by $71. Granted, the state legislature also passed a 0.25% tax increase for all brackets – so the total income tax will be a bit higher than that. But again, the actual increase is minimal.

Even the right-wing extremists at the Howard Jarvis Taxpayer’s Association concede that it’s not a big deal. “Hey, fair is fair,” their President, Jon Coupal told the SF Chronicle. “If there is true deflationary pressure, then we’re OK with those rates being adjusted accordingly.” But the media’s sensationalistic coverage gives ammunition to Republican politicians to score points. “It takes more money out of the taxpaying productive sectors and scoops it into the government coffers at a time when taxpayers are already reeling,” said Assemblyman Chuck DeVore – who is running against Senator Barbara Boxer.

The California Republican Party, whose legislators hold our state budget hostage each and every year – prominently displayed the Chronicle article on their website, with the headline “Taxes Go Up in California Again.” This is a state party currently locked in a sectarian fight on who’s more right-wing, as they keep losing faith with the electorate.

In fact, the bigger outrage here about the state income tax is how low the brackets are. Did you know that according to California law, a single person who makes $48,000 a year is in the highest income tax bracket? The state has a 1% surcharge on all income that is over one million dollars a year (which goes to mental health funding under Prop 63), but that means everyone making between $48,000 and $1 million pays the exact same percentage of their income in taxes. In contrast, the highest federal income tax bracket starts at $372,000. In other words, we practically already have a flat tax.

Californians are grossly misinformed about the state budget, because there is so little media coverage about what goes on in Sacramento. At a time when our state is falling off a cliff because an angry minority of Republicans have abused the two-thirds budget requirement to hold us hostage, there has never been a more crucial time for the public to be properly educated about how the state raises revenue and spends its money. That’s why front-page stories like this are so dangerous. It confuses voters into thinking it’s too easy for the state to raise taxes, and would kill reasonable efforts to pass budget reform.

Why are the Los Angeles Times and the San Francisco Chronicle trying to whip up a mass hysteria about taxes on a non-issue that will only marginally affect a small number of people? Maybe because the L.A. Times is owned by real estate billionaire Sam Zell – who has personally fought rent control in many jurisdictions (he gave a lot of money to pass Proposition 98), and whose company threatened mass rent increases on their mobile home park tenants. Zell would stand to lose a lot from a more equitable system that taxes the rich.

Then, of course, we have our hometown newspaper – the San Francisco Chronicle. We can’t be surprised that a Hearst publication likes to employ misleading sensationalistic headlines – but lying to readers about California’s tax system appears to be its mission. On August 2nd, the Chronicle had another front-page story that propagated every right-wing myth about our state budget. In just one article, the liberal Bay Area’s paper of record alleged that the state has been on a decades-long spending spree – and our tax system is far too dependent on income taxes for the wealthy. It would have made Howard Jarvis proud.

Thankfully we have the Internet, so the public can get other sources of information.