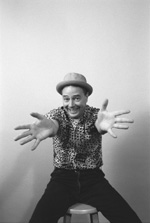 SEX & MAYHEM is one mans true confessions of what it was like to grow up gay in San Francisco. Donald Currie tells us about his own private hells that demonized his mind. His conflicts with his parents who were not happy to find out that their son were a pansy. Currie states many times that he was a bottom and apparently made no attempt at home to try to do manly things. Taking a shimmering throw and putting around his body and exclaim “Look at Me – I’m Marilyn Monroe” – obviously did not go over very well with the parents.

At first I found Currie’s story about his early life to be mundane. The sort of thing that we have heard a million times before. There are many cliches like “I was dorky as Agnes Gooch”. The dorkiest thing about that is that not many people will know who Agnes Gooch was. Currie – it seems – has directed his show at a strictly a gay audience and one that is very movie and theater savvy.

The show is 90 minutes long – just like the debates for the presidency of the U.S. I think the first 30 to 40 minutes are a more than a little boring. It is later in the show that his talent finally kicks in – and he introduces some original dialogue and manages to get the audience to sit up and really pay attention to what he is saying. This is the period when he becomes a Hippie in the Haight – with his lover. His description of those years is very visual. It brought back many memories of those halcyon days. Everyone was having fun on the way to destruction, and the radio was endlessly playing – “When You Come to San Francisco – Be sure to wear a flower in your hair.”

There are plenty of sexual references in the play – and of course there is the mayhem – as long time loves and friends fall apart like flowers in the wind. The hey-day of the beads and flowing gowns came to a screeching halt. He was not young anymore – not that desirable anymore, and he had to pick up the pieces and find a new way to live.

What powers this play is Donald Currie’s flawless performance, which is helped by Don Seaver who wrote the score for the show. Director John Dixon keeps the movement going at a dazzlingly pace. The fascinating and effective lighting is by Anthony Powers.

At The New Conservatory Center. RATING: THREE GLASSES OF CHAMPAGNE. Don Seaver is the Recipient of the Lee Hartgrave Fame Award for Best Original Scoring of a play in 2004.
Bye-Bye Bin Laden! – The new musical at the Custommade Theater written by Scot Sublet sounded like a great idea. When I first heard about it I was thrilled and looked forward to a really irreverent evening of musical comedy. Alas what I saw was a hackneyed production that is really at times so hooky that it might even become a late night cult show like the “Rocky Horror Show”. And I believe that with some tuning of the script – and making the show run faster they just might have a musical comedy that would work. Here are some things that I see that are wrong. Make an intermission. Two hours in one sitting is to hard on the legs. Also, even thought the musical score is not on the par with Andrew Lloyd Webber – it would sound better is you used a portable synthesizer that has a range of several instruments. What was that sort of screechy Carnival sound that played everything the same way? I know that the voices are not all that trained and strong. Think about using some miking to beef it up a little.

As this show stands right now – it is like a bad Saturday Night skit that goes on too long. The takeoff of “Lucy” at the conveyor belt was one of the highlights – but not terribly original. Also engaging was the Jenna and George W. Bush skit. And of course, who wouldn’t like F—K the French sung by George W? Standouts in the cast were Cameron Weston as The Prez. Baruch Porras-Hernandez as Osama bin Laden and Tracy Moore as Jenna Bush. The entire cast worked so hard, and I’m looking forward to seeing them again in future productions. The new theater is Off-Market Theater at 965 Mission St., (near the Old Mint). Bin Laden will have a special election night performance on Nov. 2nd. That could be fun. The next production will be an evening of short, and not so short, absurdist plays, including Ionesco’s “The Lesson and Beckett’s “Come and Go” in Jan. 05.

Next edition of Buzzin. Lee interviews the sadistic Dentist from the musical “Little Shop of Horrors.”