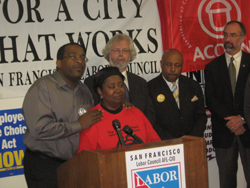 It would be easy to conclude from yesterday’s press conference that ACORN, the Central Labor Council and SFOP “sold out” to the Lennar Corporation by endorsing Proposition G. It certainly felt that way when Mayor Gavin Newsom used the moment to score political points against Chris Daly and Proposition F – while touting development in Bayview-Hunters Point. But that’s just a distraction. What really happened is that for the first time ever, labor and community groups have convinced one of the most notorious real estate developers – in a legally binding agreement – to build a historic number of affordable units. The plan will prioritize family housing, putting protections in place so that Bayview residents can access it. Promises of “jobs” are replaced by a commitment towards training the community, creating a roadmap of accountability if the voters approve Prop G. And it likely wouldn’t have happened without Prop F.

The Prop F vs. Prop G battle on San Francisco’s June ballot is another one of those political proxy fights – with progressives taking on the moderate forces, starring the neverending “Newsom vs. Daly” soap opera.

In a move that mirrors the company’s past betrayals, Lennar has asked voters to pass Prop G – a framework for Hunters Point with goals (but no promises) of affordable housing – with support from the Newsom-Feinstein machine. Daly has responded with Prop F – requiring any development to be 50% affordable – and a coalition of progressives hit the streets to get it on the ballot.

Progressives call Prop G a “blank check” for Lennar that will cause gentrification and further displacement of the City’s last working-class black neighborhood. Moderates respond that no private developer could afford to build at 50% affordability levels, so Prop F will not bring housing or jobs to the community – another “false promise” in Bayview-Hunters Point. In a way, they’re both right.

Meanwhile, Bayview residents want progress – but not progress that simply gives away the store. “We have worked a long time for getting good development for the community,” said Jackie Phillips of ACORN – who has lived in the neighborhood for 57 years. “This agreement will create a ladder for jobs, a higher living wage and affordable housing. Nobody will be left out – we don’t want people to find a better job by moving away. We want them to stay and grow in our community.”

The seven-page Core Community Benefits Agreement handed out at yesterday’s press conference is not the final product – but it’s the result of months of negotiations that ACORN, labor unions and SFOP (a consortium of church groups) have had with Lennar. The agreement calls for the final document to be signed on May 23rd – before the June 3rd election – so it will be legally binding on Lennar regardless of Prop G’s outcome. “It’s being lawyered up as we speak,” said Tim Paulson of the SF Central Labor Council.

The groups agree to campaign for Prop G and against Prop F. In exchange, Lennar will pledge (as opposed to setting unenforceable “goals”) to do the following:

Thirty-two percent of Lennar’s housing will be affordable.

Lennar will build 1,566 units of rental housing (or about 16%) that are affordable to families making less than 60% of the Area Median Income (AMI). Another 4% will be housing for first-time homeowners who make less than 100% of AMI. The remaining twelve percent will be for first-time homebuyers making 120%-160% of AMI.

At first blush, that doesn’t sound like a good deal – because Prop F requires all affordable units to be rentals at 30%, 60% or 80% of AMI. But the agreement requires that all rental and below-market-rate condos (excluding those reserved for seniors and the disabled) must be “family-sized.” 100% AMI for a 4-person household is far more “affordable” than 100% AMI for a one-person household because you have two breadwinners.

In recent years, most below-market-rate housing built in San Francisco have been studios and one-bedrooms, leaving working- and middle-class families out in the cold. Moreover, by providing affordable housing for more than just the very poor, the agreement helps those who would otherwise leave the City.

“Many people we work with in the community are Muni bus drivers (or other unionized workers) who end up leaving because they bought homes in the East Bay,” said John Eller of ACORN. “They can’t afford the new market-rate condos at $700,000, but they can’t access the affordable ones either because they’re not family units. We’re hoping to create different affordability bands outside of public investments, and at different income levels so people are not priced out.”

Lennar will contribute $27 million to a Community First Housing Fund.

This money will create at least 341 affordable housing units – or an extra 3% to a total of 35% affordability for the project – through down-payment assistance, site acquisition and seed money for potential projects down the road. One problem with strict inclusionary housing requirements on private developers is that such units must be made available through a lottery system open to all San Francisco residents. Bayview residents have expressed frustration that they don’t get the below-market rate units built in their neighborhood.

Using this fund to create affordable housing, however, allows the community to put a premium on actual (or former) residents of Bayview-Hunters Point. Moreover, the agreement lays out a priority system for all affordable units in the Area (to the maximum extent allowed by law), with an emphasis on Certificate of Preference holders, rent-burdened and assisted tenants, residents displaced by Redevelopment projects, prior residents of District 10 and family members of District 10.

Like in Prop F, the agreement requires one-for-one replacement of public housing units at the Alice Griffith Housing Project – and that residents have the right to move from their current units to the replacement units without having to relocate to any other area. As one Alice Griffith resident said at the press conference yesterday, this means that all of them will get to stay – “even some of our neighbors who we don’t want to see stay.”

Every development in Bayview has promised to bring “jobs” into the neighborhood, but the jobs almost never go to the community residents. Besides having a “First Source Hiring Policy” for all non-construction employers in the area, Lennar will contribute $8.5 million towards a Workforce training program for residents of Hunters Point. The City will match this money, putting $17 million into job training for the neighborhood.

It’s tempting to mistrust Lennar – with its track record of broken promises throughout the country – and wonder if this contract is worth the paper it’s printed on. But what ACORN, SFOP and the Central Labor Council have done is create a legally binding document that will hold Lennar accountable. Regardless of what happens to Prop G – which won’t be known until after the contract is executed – advocates have come together to get development in Bayview with concessions.

Arguably, such a deal could not have happened without the effort to defeat Prop G and pass Prop F. Lennar has called Prop F a “poison pill,” and are ready to pull out if it passes – but despite their well-funded campaign with glossy mailers, Lennar’s own polling shows Prop G losing by 20 points.

As one reporter asked at yesterday’s press conference, are Lennar’s concessions to the community a desperate, eleventh-hour move to save their measure? By facing an alternative measure that would be financially unfeasible for most private developers, Lennar had simply no choice but to “play ball” with the community if they wanted to stay in town.

But the policy substance of the agreement was not fleshed out at yesterday’s press conference – as Mayor Newsom and representatives of Lennar were eager to make it a political rally by pushing “Yes on G” and “No on F.” Newsom called Prop F a “pipe dream” that promises “literally nothing,” and urged San Francisco voters to reject it decisively.

He also took shots at Chris Daly by comparing the Bayview plan with Trinity Plaza, where the District 6 Supervisor lauded a historic affordable housing agreement that he brokered. “Why was 15% affordable good enough for his district,” asked Newsom, “but this plan is not?”

But Trinity was more than fifteen percent. Beyond the minimum inclusionary housing requirements, Daly got the developer to build 360 new units of rent-controlled housing. It was the first time in California history – and perhaps U.S. history – where a private developer voluntarily agreed to have new construction covered by rent control (despite state law.)

Unfortunately, Newsom let his political fight with Chris Daly get in the way of promoting a consensus agreement for Bayview.