SERV Program to Be Proposed at School Board 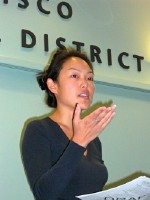 School Board Commissioner Jane Kim held a press conference yesterday to introduce the Student Emergency Response Volunteers program (SERV), saying it is a viable alternative to the JROTC programs scheduled to be phased out by the end of this school year.

The first-of-its-kind program would offer elective credit similar to that offered by the JROTC program, but minus the military connection. Instead, SERV would educate students on the creation of disaster plans, as well as familiarizing them with the disaster plans already in place for the City of San Francisco and their particular school.

“In many ways, this is the new kind of leadership, that in contrast to the JROTC leadership program, teaches crucial relevant skills as opposed to blind obedience to authority and follow-the-leader kinds of leadership,” said Commissioner Eric Mar.

Darin Ow-Wing, executive director of Community Educational Services, alongside Sandra Fewer, director of parent organizing for Coleman Advocates, and Kim, developed the SERV concept in response to the lack of leadership opportunities provided for students in the district.

“If you take the idea of service, which is what a lot of those young people involved in JROTC were about, and you apply it in a way that is possibly more useful to our communities, to our schools, it just seemed very obvious to come up with an emergency response corps,” said Ow-Wing. “We would like to believe that teachers can handle everything in the schools, but if something goes wrong, they are going to need all the help they can get so why not have a really solidly trained group of young people.”

According to Kim, courses would be taught by credentialed teachers, most likely those who are already employed by the district.

“We will be developing the curriculum ourselves,” she said. “We have not been able to find a curriculum like this throughout the country so this program may be the first of its kind.”

In addition to the for-credit course, after school programs and community service opportunities would also be offered through the SERV club.

“It actually encompasses many of the elements that students really enjoy about JROTC such as the added responsibility, the leadership, also service to the community,” said Fewer said. “We know from the youth in the JROTC just how much they want that leadership responsibility. They have said that time and time again.”

A task force was developed in response to the decision to phase out the JROTC program in 2006; however, Board of Education President Mark Sanchez indicated that the reason for the two-year delay in the creation of an alternative replacement program was as a result of the task force’s inability “to do its job.”

The task force ultimately provided the Board with a proposal for a replacement program in April; however, Kim said “there was some question and concern that while it was a great leadership program … it did not exactly capture a lot of the elements of JROTC.”

“A lot of folks felt that it was not an adequate replacement of the program; but after that happened, I started talking to folks in the community about different ideas that the Board could instead propose on our own,” said Kim. “The Board wanted to respect the policy that we had created and let the process go through. We were not satisfied with what the proposal was, and so we decided to come up with our own proposal.”

While the budget for the program is currently under development, Fewer, a proponent of the resolution who assisted in developing the suggested curriculum for the SERV program, stated that federal funds are available for the development of emergency-preparedness programs in school districts.

“The $1 million that we spend currently on the programs for the JROTC in seven schools for 504 students could be used for many, many more students to develop these kinds of leadership skills,” Mar said.

The program, sponsored by Commissioners Kim and Norman Yee, will be reviewed in the Board’s curriculum committee today, and will be reviewed by the budget committee on Tuesday. The proposal will be brought for a full vote at the next regularly scheduled Board meeting, currently scheduled for Oct. 28. If passed, the district would finalize the curriculum and the SERV program would be implemented in the upcoming school year.