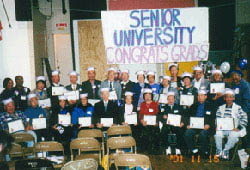 During the first class session, the Seniors, nearly all of whom are African Americans, were asked to share and discuss, “What are the main challenges which Seniors confront in San Francisco, and in the Bayview Hunters Point community in particular?”

The Seniors spoke out strongly and articulately on the challenges facing them in the community:

Car insurance rates and premiums are high (due to redlining)

Too many liquor stores

The issue of eminent domain in terms of the Third St. Light Rail Project, and the Redevelopment Plan

There was much discussion and brainstorming for solutions among the Seniors regarding the challenges facing them in the community.

Hui Thi Truong, a Vietnamese American Senior who has lived in the U.S. for 30 years and who graduated from Senior University last year, is a member of this Senior University class in the Bayview Hunters Point community. Truong is also joined by Ching Tso and Paul Ariano, staff members at the Network for Elders.

After a delicious and nutritious lunch, the Seniors viewed the film, “Saul Alinsky: The Democratic Principle – Community Organizing in Action.” The success stories featured in the documentary film, which included a housing organizing campaign in New York City in the 1980’s, led to further discussion by the Seniors in the class.

The Seniors, reinvigorated with the knowledge that they, both individually and collectively, do hold the power and strength to work for and achieve changes in the community and society they live in, are now looking forward to their next class session of Senior University.