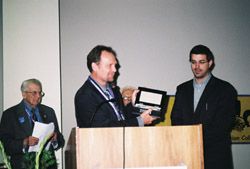 Bill Price, President of SAN, lauded the accomplishments of SAN in protecting the rights of Seniors and advocating for Seniors. Price cited SAN’s work in organizing Seniors to demand the California state legislature to support the OURx Bills on prescription drugs and to fight the pharmaceutical industry lobby.

Other SAN accomplishments included programs to improve pedestrian safety for San Franciscans, and SAN’s class offerings in its Senior University to train Seniors on community organizing, lobbying, public speaking, leadership, and diversity. The most recent three series of Senior University classes were held in the Vietnamese American, Russian American, and Filipino American communities of San Francisco.

Price praised SAN’s and the San Francisco Labor Council’s mobilization of Seniors and working people to protest the Bush’s administration plans to privatize Social Security. SAN Seniors held demonstrations at Charles Schwab corporate headquarters and Wells Fargo Bank in San Francisco, and protested at their stockholder meetings to demand that Wall Street back off from lobbying to destroy Social Security.

At the Convention, SAN recognized the accomplishments of activist Seniors with special awards. Bill Sorro received SAN’s Community Service Award for his fight for justice and affordable housing in the Filipino American community. Sister Bernie Galvin, founder and director of Religious Witness with Homeless People, received SAN’s Community Service Award for her work with San Francisco’s homeless and low-income communities.

SAN’s “Speaking Truth Award” was given to the California Nurses’ Association for its work in mobilizing nurses and other Californians to oppose Governor Arnold Schwarzenegger’s special elections in November.

SAN’s Senior of the Year Awards were given to Dr. Alicia Marquez, a retired psychologist and a SAN Board member, and Jose Morales, a SAN volunteer, for their volunteer work as activists in the community.

SAN’s Convention keynote address was given by Nan Brasmer, President of California Alliance for Retired Americans (CARA), who urged the Seniors to continue to fight against President Bush’s and Governor Schwarzenegger’s programs that hurt Seniors. Brasmer also led the Seniors at the Convention in spirited singing of three pro-Senior songs.

Daly, while standing at the SAN Convention podium and holding his one year-old son Jack, thanked all the Seniors in attendance and activists in San Francisco working on behalf of the community, “I thank you for this Award, this is your Award, this is our Award together. We will fight on to protect Seniors and all the people of our communities.”