Send In A Sub: Life In The Blackboard Jungle 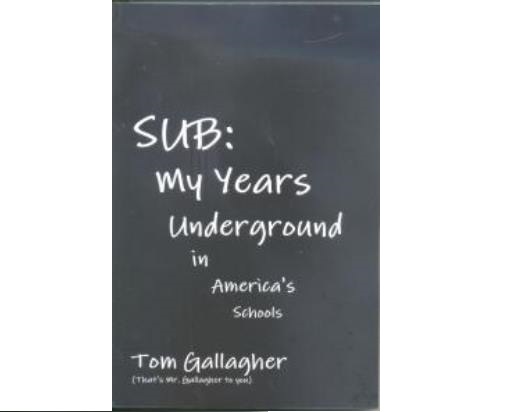 “We substitute teachers like to think of ourselves as the marines of the public education system. Whenever a breach opens in our nation’s educational front lines, off we go: The few, the brave, the stupid.”

Thirty years ago, there was no better progressive state legislator in Massachusetts than Tom Gallagher, who migrated to Beacon Hill after graduating from Boston College and working as a part-time public school teacher.

In 1980, Gallagher won a Democratic primary in the Allston-Brighton section of the city in September. Thanks to Boston being a one party town, there wasn’t even a token Republican on the ballot in November. As Gallagher recalls in his new memoir, Sub, his personal profile at the time was:

“reasonably normal for a substitute teacher—I was a guy in his twenties sort of waiting for something to happen….So while I had a big deal political job waiting for me in January, I was flat broke and in no position to be looking for other ‘real’ work during the months of October, November, and December. So I returned to subbing for the interim.”

Gallagher was assigned to an inner city Boston school known for its student misbehavior. But his primary concern was “what other people might make of the new state rep thrashing about at the bottom of the educational heap.” Sure enough, a soon-to-be constituent spotted him in the halls and pronounced herself satisfied that she had voted for the right person. “She no doubt figured that anyone willing to set foot in Jeremiah Burke High School (aka “the Jerry”) wasn’t likely to be daunted by anything he encountered later in the Massachusetts House of Representatives.”

Life, as a lonely back-bencher, in the leadership-controlled Massachusetts legislature quickly got old, however. In 1985, the longtime incumbent in the 8th Congressional District, a fellow named Tip O’Neil, decided to retire. A big crowd of local Democrats decided it was time to move up and out—to Capitol Hill in Washington, D.C. State Rep. Gallagher was among them.

The resulting scramble for O’Neil’s seat produced a primary field so like-minded that it even included two members of the Democratic Socialist of America! (Gallagher was the real DSAer, the other guy more of a fellow traveller.) The ten-way race also included party royalty, pitting a Roosevelt against a Kennedy. The biggest spender in the field happened to have the latter surname. Enough said about who won and why, in the last redoubt of Camelot.

Unfortunately, Gallagher gave up his seat in the state House in order to seek higher office. Not long after his Congressional primary defeat, he made a further life-changing decision—moving to San Francisco. There he has lived on Bernal Heights for the last three decades, while working as a free-lance writer and an international election observer in war-torn countries ranging from East Timor to the former Yugoslavia.

Back to the Classroom

To pay the bills and keep his schedule flexible, Gallagher returned to the bottom rung of professional employment in public education. “When asked what I do for a living, I often reply that I yell at children professionally….Five days a week, I see them on their worst behavior. That’s in a good week, of course—when I get five days work.” SUB: My Years Underground in America’s Schools (Coast to Coast Publishing, 2014) contains daily diary-type entries covering 17-years worth of subbing experience in a wide range San Francisco and South San Francisco schools. According to the author, their names “have been changed to protect the innocent and guilty alike”—but savvy natives and local public school alums will surely be able to decipher who’s who.

In the era of corporate-backed “education reform,” much has been written about the degradation of teaching work. The institutional causes include increased class-size, standardized testing, “common core” curricula requirements, and creation of a two-tier education system, based on partial privatization (ie charter schools for the more gifted and highly motivated). In big city public schools—forced to welcome one and all (until the first fight breaks out)–conditions are rough enough for the regular staff. As described in hilarious but often painful detail by Gallagher, the classroom challenges facing subs are simply off the chart, in terms of job difficulty.

Gallagher’s daily vignettes read like an account of life on the battlefield and in boot camp at the same time. After checking his voice mail box for an early morning dispatch, the author has found himself, on hundreds of occasions, headed off for a day-long struggle “to keep the most minimal order,” among unruly, sometimes physically threatening, students in dozens of schools. Early on, he decided to decline some assignments. (“A friend of mine use to find it very funny that I was willing to go to Bosnia but wouldn’t substitute teach in Oakland. I explained that in Bosnia, I had 40,000 UNPROFOR soldiers to protect me and what did I have in Oakland? Any Bosnian who might attack me was in for a lot more trouble than some Oakland high school kid would be.”)

Gallagher’s profiles of students, parents, co-workers, and over-whelmed administrators capture the full range of human-types thrown together in the great melting pot of public education. Among principals, he most appreciated candor, such as the warning he got about one assigned class in an elementary school located across the street “from a housing project that was dangerous to even go near because people were being hit by stray bullets just passing by.”

“As soon as I got there on Monday, the principal informs me that

subs don’t usually stay more than one day with this class. It seems the regular teacher recently quit in the middle of a school day…The principal described the class as ‘wounded’…And, the class is, in fact, off the wall nuts. Even with two other adults in the room with me, teaching is simply impossible; our aspirations go only so far as keeping them in their seats.”

Most of SUB consists of first-person narrative journalism. Not surprisingly, in light of the author’s frequent disciplinarian role, the book’s one major discussion of educational policy addresses the “difficult topic” of suspensions and their disproportionate racial impact. As Gallagher notes, in 2012, San Francisco schools suspended about 2,000 students, of whom fifty percent were black, out of a total school population only 10% African-American.

The dilemma here, of course, is that “the kids most negatively impacted by classroom disruption tend to be of similar background to those causing the disruption….” In Gallagher’s critical assessment of the “anti-suspension movement,” he argues that “most teachers are quite aware of the racial discipline disparity and the vast majority of them are also uncomfortable and unhappy with the situation.” Unfortunately, they “generally lack the resources to handle both the needs of their classes as a whole and the needs of kids who are disruptive in class.”

If America’s teacher unions want to foster greater public understanding of what their rank-and-file members, fully-employed and part-time, are up against in many urban schools, they would be well advised to publicize SUB. I seriously doubt they will, however. As second-class citizens in their own labor organizations—and often lacking any representation at all—substitute teachers are routinely ignored, as well as abused, by one and all.

In San Francisco alone, Gallagher estimates that 300 to 350 subs report for duty every day and, on some days, as many as 450. With publication of this book, they now have a Boswell of their own, a “sub” with a sharp eye for detail, a droll sense of humor, oft-tested reserves of empathy, and deep outrage over the social and economic conditions that foster and perpetuate public school dysfunction.

(Steve Early is a former union organizer who also abandoned the Bay State for the Bay Area two years ago. He is the author, most recently, of Save Our Unions: Dispatches from a Movement in Distress from Monthly Review Press. He can be reached at Lsupport@aol.com)