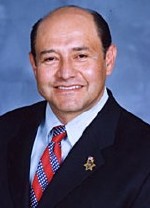 Lou Correa, a Democratic State Senator from Orange County, has killed the nation’s first bill to stop predatory investments that displace renters from their homes. The bill, AB 2337, authored by Assemblymember Tom Ammiano (D-San Francisco), sought to ban the state’s public employee pension funds from investing in “predatory equity” schemes. The issue gained significant attention after real estate investments by CalPERS and CalSTRS in East Palo Alto and New York City resulted in the displacement of thousands of rent-controlled tenants and the loss of hundreds of millions of dollars. Senator Correa’s committee stopped the bill yesterday at the request of the California Association of Realtors. Correa has received significant campaign donation from realtor interests.

“Only someone in the pocket of realtors could possibly oppose this bill,” said Dean Preston, Executive Director of Tenants Together, California’s statewide organization for renters’ rights. “There’s no other explanation for Senator Correa’s decision to kill this legislation.”

Tenants Together and the East Palo Alto Fair Rent Coalition co-sponsored the bill to prevent workers’ retirement funds from being invested in schemes to evict working people. The bill had the broad support of at least twenty nonprofit housing organizations, labor groups and government entities. The only opponents were several landlord groups and the California Association of Realtors.

The California Bankers’ Association, which originally opposed the bill, removed its opposition based on substantial author’s amendments that narrowed the scope of the bill. CalPERS and CalSTRS, the very entities whose investments would have been restricted under the bill, also took a neutral stance on the bill after amendments were incorporated into the language of the bill.

The full Assembly had approved the bill by a vote of 43-30 before it landed in Senator Correa’s committee yesterday. Senator Correa did not pose a single question at the hearing to the author or witnesses about merits of the bill, instead derailing the bill without explanation.

Despite these developments, Ammiano’s groundbreaking bill was not in vain. The bill forced a discussion about predatory equity investment practices and drew considerable media attention to the problem. Additionally, in response to the bill, CalPERS and CalSTRS adopted new internal policies banning future predatory real estate investments, a move praised by tenant advocates a major step toward stopping public pension funds from financing evictions.