Selling Out Tenants & Jail Health for 0.2% of the Budget 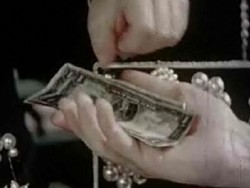 Today, the Board of Supervisors Budget Committee will vote on a proposal that everyone knows is dead on arrival – but Mayor Gavin Newsom insists that opponents are being too “ideological.” Blowing the cap on condo conversions of T.I.C.’s (tenancies-in-common) is something that real estate speculators have pushed for decades, and now they want to pit middle-class homeowners against tenants. Everyone admits it would only bring $8 million in revenue this year – 0.12% of the whole City budget. Newsom also wants to privatize Jail Health Services – which he attempted last year – right when the City’s jail population has declined, and the program’s costs are down $1 million. He says it would “save” the City $11 million, but no one really knows the figure – ranges are between $3-$11 million, so a fair estimate would be about $7 million. Combined, these problematic (and permanent) proposals would net the City $15 million – or 0.228% of the budget, at a time when we are not making the kind of reasonable cuts elsewhere.

What’s So Bad About Condo Conversions?

This afternoon, the anti-progressive group Plan C will turn out homeowners to talk about wanting security in their investment – and how they’re willing to give the City money in these tough times to achieve it. They are T.I.C. owners, who are sharing a mortgage with neighbors until their number comes up in the “condo-lottery.” Owning a T.I.C. is a risky investment – which is why they are cheaper than condos, and a more affordable path for first-time homeowners. But it’s a risk they knew precisely what they were getting into.

Here’s the problem. These T.I.C.’s were once rental units – and largely during the dot-com boom, tenants were evicted under the Ellis Act. The City’s maximum of 200 condo conversions per year is in place to stem the erosion of pre-1979 rental housing (all new construction is exempt from rent control), and to stop rewarding bad behavior. If you are a T.I.C. owner who genuinely wants to condo convert for the full “security” of being a homeowner, waiting a few years should not be a problem. But what the “condo lottery” does is make it harder for real estate speculators to quickly convert and flip the property.

But didn’t we pass a law a few years ago that blocks the condo conversion of buildings with an Ellis Act evictions ? Yes and no. First, only if the eviction happened prior to November 16, 2004 – and most T.I.C.’s with Ellis evictions pre-date that time. Second, only if the eviction was of a senior, disabled or catastrophically ill tenant. Third, real estate speculators have become very creative since the law passed – offering “buy-outs” to tenants (which end up being rotten deals) to avoid having an Ellis recorded on the property. If you’re told there is no defense to an Ellis and you’re being offered $5,000 to leave, wouldn’t you take it?

A mass-conversion of T.I.C.’s into condominiums will open the floodgate for real estate speculators – and would only bring $8 million in this year’s budget. But the details are even worse: T.I.C. owners who want to convert would pay a fee depending on how long they have been in the “condo lottery.” If it’s your first year, it would cost $20,000 – and $4,000 less for each additional year. If you’ve been in the lottery for five or more years (i.e., all T.I.C.’s caused by Ellis evictions before the law changed), you only pay $4,000. In other words, the “worst” T.I.C. conversions would bring the least revenue to the City.

Progressive Supervisors are unhappy about the Mayor including this as part of his Budget – because it makes it even harder to save important social programs they care about. To add insult to injury, Newsom’s Budget also cuts $125,000 in Ellis Act eviction defense that lawyers at the Tenderloin Housing Clinic provide – which produces victories like the Jasper Place tenants in North Beach, who now have peace of mind that they can remain in their home.

Every year, Mayor Newsom proposes contracting out Jail Health Services – saying we could save money by replacing the Public Health Nurses who currently deliver services with a private company. He often cites Alameda County, which privatized its Jail Health services and spends less per prisoner – as have other counties and the state prison system.

But showing how it’s done elsewhere only proves the perils of privatization. The health disparities between inmates in San Francisco and Alameda County – whose contracted out services have led to de-skilling nurses’ positions – is staggering. “In order to realize the ‘savings’ of contracting out Jail Health Services,” said Gabriel Haaland of SEIU 1021 at last week’s Budget Committee, “they would have to cut nursing staff in half.” There are real health consequences for the City’s most politically defenseless population.

At his budget speech on June 1st, Newsom claimed that privatizing Jail Health Services would “save” the City $11 million a year. Turns out that number is only under the rosiest of scenarios. The Controller did a study, which showed that it could save anywhere from $3 to $11 million. Budget Analyst Harvey Rose has estimated it at around $7 million.

But the timing – as far as budget reasons go – could not be worse. Jail Health Services expenses are down by $1 million, because of the declining inmate population. At his presentation to the Budget Committee, Sheriff Michael Hennessey announced that they have even temporarily closed two of the small Jail Houses at the San Bruno Jail site. In other words, calling for this right now in order to save money doesn’t make much sense.

When the Money Doesn’t Add Up to Much

Sometimes, just because a proposal “saves money” doesn’t make it a good idea. Just like there are a thousand ways to skin a cat, there’s more than one way to balance the budget. Mass condo conversions and privatizing Jail Health Services both add a significant level of risk, and the “benefit” of money doesn’t add up to much. Combined, the two would net $15 million – which sounds like a lot, if you don’t know much about the budget.

But San Francisco’s budget is $6.482 BILLION dollars. In other words, $15 million is less than one-fourth of one percent. Is that really worth such a dangerous endeavor? As one Supervisor said recently on a related topic: “it’s chump change … it’s decimal dust.”