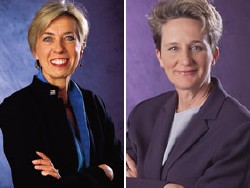 Andy Stern’s announcement that he is resigning as SEIU President was abrupt and unexpected. It leaves Anna Burger and Mary Kay Henry scrambling to win majority support on the Executive Board. While Stern groomed Burger as his successor, he leaves office without ensuring a smooth path for her election. And considering that Burger is more closely identified with Stern’s policies, the Executive Board may prefer to give the appearance of charting a new course by selecting Henry as the new President. Here’s my assessment of what Stern’s departure means for SEIU, its battles against UNITE HERE and NUHW, and for the rest of the labor movement.

It’s been widely reported that Stern always planned to leave after the passage of health care legislation, even though his official position was that he would wait until after the 2012 SEIU Convention. But there are some curious aspects of Stern’s departure.

First, it came suddenly, and the media picked up the story from an email sent by Dianne Sosne the head of an SEIU local in Seattle. Why would SEIU, which has the smoothest media operation in labor, allow word of its President’s surprise resignation to seep out through a staff email rather than an official announcement?

Second, why would Stern quit only days after the verdict in SEIU’s civil lawsuit against NUHW? Even if his departure had nothing to do with the lawsuit, its timing supports arguments that SEIU’s lawsuit failed to achieve its goal, and that Stern no longer wished to be involved in the bitter and likely long-running California battle.

Third, why would Stern quit without clearing a path for his successor? Both Anna Burger and Mary Kay Henry have been on the phone with Executive Board members seeking their support. While Burger remains the favorite, Stern’s successor will not be a quick, unanimous choice.

Fourth, Stern announced his resignation after last week’s negotiating session with UNITE HERE failed to make progress (it was supposed to take two days but the second day was cancelled). The combination of the disappointing trial verdict against NUHW and Stern’s inability to resolve SEIU’s conflict with UNITE HERE may have led him to conclude that it was time for someone else to take over.

There has long been talk about possible health issues, or Stern being connected to the Tyrone Freeman corruption scandal in Los Angeles, but there is no hard evidence that either was a factor.

The bottom line: Stern was burned out, saw nothing on the immediate horizon that excited him, and decided he wanted out. He clearly prefers being a spokesperson for political issues to the day to day struggles of running a labor union, and expect him to stay politically involved.

The Impact of Stern’s Departure

Andy Stern’s personality dominated SEIU and helped build the union’s success. The fear and loyalty he engendered among staff, members and the media is not transferable.

This likely means more open debate and internal dissent at SEIU, which can only help the union’s troubled relations with the broader labor movement. It will be easier for Stern’s successor to move SEIU back into the AFL-CIO (Change to Win was effectively killed after SEIU attacked ally UNITE HERE), and possibly easier to resolve SEIU’s conflict with UNITE HERE.

Stern framed SEIU’s fight against UNITE HERE in personal terms, describing how he was fighting to protect his grandmother’s assets and legacy with the ILGWU. Of course, Stern ignored Raynor’s depleting tens of millions of dollars in ILGWU assets after he took control of the union’s real estate and other resources following a merger.

Burger and Henry are not driven by such personal feelings, and are likely to view SEIU’s campaign against UNITE HERE strictly in terms of what is best for their union. Stern’s departure clearly encourages forces within SEIU who have long sought peace with UNITE HERE.

Stern’s leaving also sends a message to SEIU-UHW members desperately trying to resist NUHW incursions. The message is that their leader has jumped ship, while Sal Rosselli—whom SEIU regularly and falsely accuses of dodging fights—is still around.

That may sound harsh, but Stern was the one figure in SEIU that all members knew, and the one whose pronouncements were accepted without debate. Mary Kay Henry is known to workers, but lacks the charisma and sense of Washington DC power of Andy Stern.

SEIU-UHW members have to be wondering what’s going on with their union, particularly after its $5-10 million lawsuit against NUHW failed to accomplish its goals.

Mary Kay Henry testified at trial against NUHW, was centrally involved in the decision to place the SEIU-UHW in trusteeship, and is not about to consider making peace with Sal Rosselli (unconfirmed reports are that by August 2008 Henry was among those pledging to “destroy” Sal).

Nor is Burger, who is said to have backed Stern all the way in his decision to place UHW in trusteeship.

The big picture: one week after what SEIU hoped would be a jury verdict that put NUHW out of business, its leader has resigned, its UHW members are demoralized, and NUHW is energized as never before.

Had Stern retired in 2005, he would have had a much richer legacy. Now, even longtime supporter Steven Greenhouse cited Stern’s “fierce battles with other unions” as part of his legacy. Stern’s decision to invest over $120 million in the 2008 elections did not bring passage of EFCA, immigration reform, or a health bill with a strong public option — the three top SEIU priorities.

Richard Trumka’s election as AFL-CIO President restored that federation as the leading group speaking for the labor movement, and, as I described earlier this week, SEIU has appeared to lose confidence in its ability to increase membership via grassroots organizing.

One wonders if, and how quickly, SEIU can regain its former luster. It will select a President at its 2012 convention, so Burger or Henry are essentially interim choices who will either solidify their power or be replaced soon. Many thought Stern wanted Mitch Ackerman as his longterm replacement, and given his promotion to the Executive Board without a long track record, he likely remains the favorite of Stern backers.

Although I wrote the most positive book in years about SEIU’s immigrant organizing, grassroots political operation, collaboration with religious groups and its strategic sagacity, and I saw SEIU as harnessing the best components from the heyday of the UFW, my accounts of SEIU’s wrong turn since 2009 have led some to see me as unfairly critical of the union. Unfortunately, I still believe that SEIU lacks a clear focus, suffers from an acute crisis of confidence and spirit, lacks visionary leadership at the top, and that its fights with UNITE HERE and NUHW are not aberrations, but are symptoms of a larger problem likely centered on SEIU’s confused mission.

Sadly, despite all of his accomplishments, Andy Stern leaves office with SEIU’s problems worsening, and its future unclear.