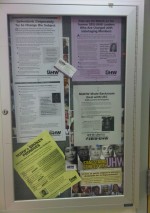 SEIU has long represented nearly 600 workers at USC University Hospital. Now, this longtime leader in health care worker organizing is vigorously working to transform the hospital into a non-union workplace. Julio Estrada has worked at the hospital for fourteen years. The SEIU-UHW member summed up the feelings of many at his workplace by saying, “It’s a shame that SEIU is teaming up with the devil – they’d rather see no union at this hospital than to give members a fair election.” Estrada and other members are furious that SEIU is spending their union dues on a campaign to deprive them of future union representation. And while SEIU works under the radar screen to undermine its own union members in East Los Angeles, it is paying workers to blog about its trial in San Francisco, in which SEIU is suing its former leaders (now with NUHW) for allegedly breaching their fiduciary duties to SEIU-UHW members.

The irony of SEIU’s legal theory is not lost on Estrada and his co-workers. They believe SEIU’s efforts to deny them the superior wages, working conditions and job protections enjoyed by unionized hospital workers is the real breach of fiduciary duty, and have provided ample evidence that their union is working against its members best interests. It is a very depressing story, but one that must be told.

USC University Hospital (hereafter “USC Hospital”) is among the facilities where SEIU-UHW members filed decertification petitions, seeking an election so they can affiliate with NUHW. But as it has repeatedly done elsewhere, SEIU filed blocking charges with the NLRB delaying these elections. SEIU knows that given the democratic right to vote, workers will move to NUHW.

What makes SEIU’s campaign at USC Hospital so egregious is that a union that is supposed to be getting health care workers to join unions is working against this goal. SEIU is assisting a stridently anti-union employer to ensure that when the election does occur, a majority of workers choose “no union” over “NUHW.”

First, while St. Joseph’s Health Systems, the Santa Rosa employer, opposed unionization, it did not wage an all-out anti-union campaign. In contrast, USC Hospital has retained an anti-union management firm, the Dayton, Ohio-based Weissman Group. The firm’s website advertises its success in “Union Avoidance Consulting and Strategy,” and its home page describes the Employee Free Choice Act as the “most anti-business legislation introduced in Congress since 1935.”

USC Hospital would not have retained the Weissman group if it did not believe it had a real opportunity to get workers to choose “no union” over joining NUHW or SEIU. And the reason for its belief is SEIU’s concerted attacks against NUHW, and its continual election delaying tactics which, for reasons described below, serve only the employer’s interest.

More significantly, the Santa Rosa Memorial Hospital workers targeted by SEIU’s anti-union appeals were not unionized. Nor, of course, were they SEIU-UHW members.

Incredibly, SEIU, which is supposed to be convincing workers on the economic benefits of unionizing, is instead using its own members’ money to potentially deprive them of future union representation. And SEIU is facilitating management’s aggressive drive to make USC Hospital union-free, which means not only getting a majority of current SEIU members to vote “no union,” but also includes encouraging decertification petitions among nurses, who are currently represented by the California Nurses Association.

No wonder longtime SEIU members like Julio Estrada are so outraged by their union’s conduct, and see SEIU’s lawsuit against current NUHW leaders as blatant hypocrisy. SEIU is working directly against the economic interests of its own USC Hospital members, precisely what it has accused its former leadership of doing in the ongoing federal court trial in San Francisco.

Basil Nasir, a respiratory therapist for fifteen years, describes SEIU as simply “bill collectors.” He and other workers resent SEIU using their dues to attack NUHW, the only union that can defeat “no union” in the election.

Since imposing its January 2009 trusteeship, SEIU has gained little support among USC Hospital workers. As was the case in Santa Rosa, where it ultimately won only 13 votes despite campaigning until the end, SEIU has no chance of defeating NUHW at USC Hospital. So it’s implementing a multi-part plan to convince workers to oust the union entirely.

First, it filed blocking petitions to hold up the election. According to NUHW supporter and longtime shop steward Nasir, “USC was happy to have the election, only SEIU opposed it.”

SEIU and the rest of organized labor have long argued that election delays reduce the momentum of union organizing drives and give management —aided by union-busting consultants like the Weissman Group—ample time to use one on one meetings and other strategies that ultimately defeat unionization. That’s why SEIU has pushed for federal legislation requiring quick elections—-the union knows that election delays at USC only serve to help management ultimately prevail.

SEIU has sought to maximize delay at USC Hospital by requesting lengthy hearings, and then asking for time extensions for filing briefs at each stage. SEIU is using every common management tactic to prevent its own workers from maintaining future union status, in contradiction to its own public denunciations of such delaying strategies when it promotes the Employee Free Choice Act and other labor law reforms.

SEIU is also working hard to delay the election because USC management has steadily hired new workers since the decertification petitions were filed, and could add 100 prior to the eventual election. These workers are likely to be pre-screened for union sympathies, so that SEIU is effectively helping the employer change the electorate to help the “no union” campaign.

SEIU’s conduct appears to clearly violate its own fiduciary obligation to work in its members best interests. And if SEIU wants to argue that promoting “no-union” at USC Hospital somehow serves its members interests, the Wall Street Journal and FOX News are eager for the story.

In addition to its delay tactics, SEIU launched a character assassination campaign against NUHW that seeks to drive workers to the “no union” side. As the accompanying photo shows, SEIU’s bulletin board in the hospital consists almost entirely of attacks on NUHW. There is not a single poster that criticizes management, or points to management’s increasingly aggressive anti-union behavior.

Instead, SEIU’s flyers attack NUHW and one of its most respected leaders, Barbara Lewis. When I was at the hospital on March 24, SEIU had posted, and was distributing, a new flyer that accused Lewis of making “backroom deals” against USC Hospital members’ interests.

In truth, while at SEIU-UHW, Lewis negotiated workers some of the best hospital contracts in the nation. Accusing Lewis of “backroom” deals, like SEIU’s breach of fiduciary duty lawsuit against NUHW leaders now in trial in San Francisco, is a classic case of ascribing one’s own wrongful actions to your rival.

Fred Ross, Jr., who once headed SEIU’s St. Joseph’s Medical Center campaign, currently organizes for IBEW Local 1245, and has spent decades organizing workers, was outraged to learn of SEIU’s attacks. He told me, “Barbara Lewis is one of the top hospital worker organizers in the country, and is deeply committed to workers.”

And in another whopper of a lie, SEIU’s flyer also claims that SEIU-UHW is eager for a vote that “once and for all kicks NUHW out of our hospital,” when the truth is that but for SEIU’s actions, the election would already have occurred.

Finally, SEIU announced at the most recent hearings that it believes that the longstanding bargaining unit at USC Hospital should be divided into three separate units, service, technical and professional. Contesting bargaining units is another classic anti-union management tactic, and SEIU gave no reason for this proposal. Changing the bargaining units would not only further delay elections, but enable the employer to “pick off” weaker units and likely leave some workers either non-union or with weaker contracts.

SEIU’s proposal for separate bargaining units should particularly raise questions about its breach of fiduciary duties since it contradicts the union’s grand scheme of mergers and consolidations in California. President Andy Stern has long touted larger bargaining units as boosting worker leverage.

USC Sodexho Election on May 6

One decertification election at USC Hospital has been scheduled, and that involves 55-60 cafeteria workers employed by Sodexho. These workers are currently part of “what Service Workers United,” which began in 2005 as a partnership between SEIU and UNITE HERE, but which the latter has sought to extricate itself from since SEIU began raiding its members one year ago.

Francisca Bustillos, a Sodexho cashier, estimates that 85-90% of workers filed decertification petitions last September, and believes NUHW will overwhelmingly win the May 6 election. Yet Bustillos has observed that SEIU staffers “have started coming around after they were gone for three years,” and is suspicious that SEIU will try to prevent the workers moving to NUHW.

Julio Estrada noted that the day before my visit, SEIU representative came into the hospital and began handing out flyers to visitors, which is prohibited. Estrada believes these reps “came in with the goal of getting kicked out by management so that they could file a grievance, further delaying the election.”

Estrada feels SEIU’s behavior is “a shame to watch.” He and his co-workers remain confident that NUHW will defeat “no union” when the election is finally held.

But even if NUHW wins big, SEIU’s running interference for management’s anti-union campaign at USC Hospital stains the union’s legacy.