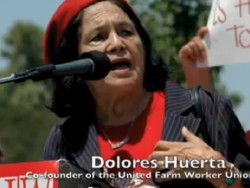 In his book, Confessions of a Union Buster, Marty Leavitt observed: “the only way to bust a union is to lie, distort, manipulate, threaten, and always, always attack.” In California, SEIU faces a similar challenge: it must convince 44,000 Kaiser Hospital workers that the NUHW leadership team that brought them the best contracts in the industry when they previously ran SEIU-UHW should be replaced by out-of-state staff with no such track record. It’s a tough sell, which is why SEIU is avoiding public debates. Instead, SEIU is following the classic union-busters strategy of relying on massive spending (between $20-40 million) to spread falsehoods about NUHW in robo-calls, email blasts, slick mailers and worksite visits. SEIU will soon have 2,600 (!) full-time staff on the Kaiser campaign. SEIU is also getting in-kind assistance from Kaiser, which has turned conference rooms over to SEIU’s campaign. SEIU is likely running the most expensive political campaign per voter in United States history, and is ensuring that the Kaiser election is not only the largest NLRB election since the 1940’s, but among the most dishonest.

In its national Labor Day e-mail message, “SEIU Members and Labor Day,” SEIU described its activities in over a dozen cities. But it made no mention of its Kaiser Hospital campaign, where SEIU is expending more resources than in all other struggles combined.

SEIU is not promoting its efforts at Kaiser for good reason. Its campaign is taking a page from the playbook of professional union-busters by avoiding public debate, instead seeking to sway workers through lies and fear. SEIU does not want the public or its members to know how many millions of dollars in membership dues are being spent at Kaiser, a total that overwhelms SEIU’s funding for immigration reform and its other highly promoted priorities.

SEIU’s Kaiser campaign may be the most expensive political campaign (per voter) in United States history. The union spent $10 million on a much smaller Fresno home health care campaign in 2009, which used 900 staff compared to a Kaiser campaign force that increases to 2,600 this week.

Having analyzed SEIU’s Kaiser campaign, I believe a $40 million estimate is clearly reasonable. But even if SEIU only spends $20 million, this would still greatly exceed the massive campaign blitz of California’s Meg Whitman. Whitman has spent over $100 million to reach 17 million voters, while SEIU will spend 20-40% of that amount to reach an electorate – Kaiser’s 44,000 workers – that is 0.2% of the size.

Imagine how many SEIU robo-calls, personal visits, and mailers this means for each Kaiser worker. And when you add Kaiser’s overt (and likely illegal) support for SEIU, we are talking about a blizzard of lies designed, as union buster Leavitt put it, to “tap the fears” that lie within workers.

When SEIU recruited members of the Engineers and Architects Association of Los Angeles to switch to SEIU Local 721, its information sheet stated:

What happens to our current MOU and negotiated raises if we leave EAA and join SEIU? Would we still be under same MOU terms or would SEIU negotiate a new contract?

Until L.A. city professionals determine – in a transparent and empowering process –
what a new collective bargaining agreement should include, the current contract remains in place.”

That’s right – “the current contract remains in place.” But because SEIU needs to scare up the votes of Kaiser workers, SEIU has mailed at least six hysterical pieces lying about this critical issue. Here’s a sample of SEIU’s false claims that workers will lose wage increases and bonuses (known as PSPs) in their current contract if they join NUHW:

“Our PSP Could Be DOA” – Kaiser has confirmed that if we leave SEIU-UHW, our PSP bonuses are no longer guaranteed and we could lose them.

“I just heard the news that NUHW is putting our PSP at risk. Every March my children and I go to Disneyland. If we were to lose our PSP bonus we would not longer be able to go. I’m saying “no” to NUHW – don’t mess with my Disneyland.”

“It just keeps getting worse. It’s bad enough we lost our 2% raise in April. Now we just found out that we’re losing our PSP bonuses too.”

SEIU’s lies do “keep getting worse,” as it continues to stir false fears among its own members even after the NLRB ruled on August 27 that Kaiser broke the law in withholding raises from workers who voted overwhelmingly to leave SEIU for NUHW last January. The NLRB found:

“… Respondents [Kaiser] failed to maintain the established terms and conditions of employment for employees in these three units … tuition-reimbursement … time for monthly shop-steward training … an April 1, 2010 wage increase … The Acting General Counsel seeks an Order requiring that the Respondent Permanente, Respondent Foundation and Respondents pay interest on any backpay or other monetary awards on a compounded quarterly basis.” (Emphasis added)

Neither its own prior advice to EAA workers nor the NLRB’s legal ruling has deterred SEIU from trying to scare workers into wrongly believing that their contract rights will be impaired if NUHW wins.

The Swift-Boating of NUHW Leaders

In 2004, Republicans feared the contrast between military hero and Democratic Presidential nominee John Kerry and President Bush, who evaded military service under controversial circumstances. The “Swift Boat Veterans for Truth” was then created to spread lies and disinformation about Kerry’s military record.

Although virtually everything the “Veterans” said was false, the constant repeating of these falsehoods led enough voters to question Kerry’s record, and helped turn the race in Bush’s favor.

SEIU is engaged in an equally false propaganda campaign in its swift-boating of NUHW leaders. Multiple mailers falsely proclaim that top NUHW leaders were “Found Guilty,” or were “Repeatedly Found Guilty,” with at least one leaflet quoting a worker who claims that NUHW leader Sal Rosselli allegedly “admitted he stole our dues money and would do so again.”

SEIU has to viciously attack NUHW leaders because it is they, not anyone now affiliated with SEIU-UHW, who won Kaiser workers the “best pay, benefits, and job protections in the healthcare industry.” SEIU’s campaign is designed to shift workers’ focus away from the central question of which union’s leadership is responsible for Kaiser’ top compensation, because the answer is indisputably NUHW.

The truth is that no NUHW leader has been found “guilty” of anything. Just as the Swift Boat Veterans attacked Kerry’s military service to conceal Bush’s sorry record, SEIU falsely ascribes “guilty” verdicts to NUHW officials to conceal that its top California official (Tyrone Freeman) was removed from office for criminal violations, and another (Alejandro Stephens) was just sentenced to prison last week.

SEIU and Kaiser vs. NUHW

SEIU has more in its favor than money and a willingness to lie; it also has the aggressive and likely illegal support of the employer. Kaiser is paying contract specialists to work on SEIU’s behalf in direct violation of federal law, and has even provided conference rooms for SEIU campaign events. In addition, it has also – as described by the NLRB ruling above – colluded with SEIU’s fear tactics by illegally withholding raises from Kaiser workers who left SEIU for NUHW earlier this year.

Kaiser also entered into an unprecedented two-year contract with SEIU this June, months before the prior contract’s October expiration. The new contract differs from the five-year contracts that preceded it, and was clearly expedited to fit SEIU’s election strategy of telling workers that they risk losing raises included in the just negotiated contract if NUHW wins ( its rare for labor negotiations to conclude months before contract expiration, particularly at Kaiser where workers were guaranteed a 3% raise for the next year under the deal Rosselli’s team negotiated in 2005.

NUHW supporters have filed a federal lawsuit against Kaiser for its illegal collaboration with SEIU, and given the videos I have seen (which are not public), their case appears strong.

So while SEIU is deluging workers with robo-calls, NUHW did not have their phone numbers until recently. And when you consider that 44,000 workers are involved, and that many work in office buildings rather than public medical facilities, NUHW’s lack of contact information in a short election time frame gives SEIU a major edge in access to voters.

It is a UFW vs. Teamsters type struggle at Kaiser, but, as with the farm workers union, NUHW has some of the nation’s most dedicated and hard-working organizers on its side. NUHW’s campaign is also led by an extraordinarily committed group of worker supporters, who led the decertification drive designed to return the union leadership that previously won Kaiser workers historic gains.

Big money and fear campaigns usually win in American politics, but not always; if workers find their way to the truth, NUHW can prevail.