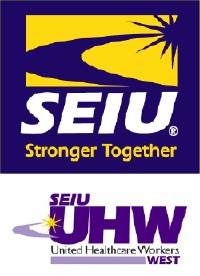 The nearly year long battle between SEIU and its California-based affiliate, the United HealthCare Workers (UHW), intensified yesterday as ballots were counted in an election that UHW chief Sal Rosselli described in a December 11 conference call as a “sham.” Though only “advisory,” the election, whose results were announced this morning, resulted in an 86.2% to 13.8% vote in favor of creating a single statewide long-term care local. If affirmed by SEIU’s International Executive Board, the vote would result in UHW losing nearly half its membership (the alternative choice could have resulted in UHW ceasing to exist, replaced by a new statewide SEIU health care union). According to UHW, the election lacks legitimacy for several reasons, including the fact that less than 10% of 309,000 eligible voters cast ballots, while 125,000 union members filed protests. But SEIU insists that the realignment of UHW workers will enhance worker unity and power, while also facilitating new organizing. SEIU also maintains that Rosselli has reversed course in opposing the creation of a single local for California long-term caregivers; the UHW leader says he still supports such an entity, but SEIU is circumventing the democratic process. As the war of words escalates, prospects for a mediated solution diminish.

After holding a press conference with elected officials on the steps of San Francisco City Hall on December 10, UHW followed up yesterday with a conference call to denounce what UHW’s Sal Rosselli described as the “latest attack” on its members by the SEIU International. Rosselli was referring to the election whose results could lead SEIU’s International Executive Board to vote at its early January meeting to shift 65,000 long-term care workers out of UHW, creating an entirely new statewide local for such workers whose leadership would be picked by the International.

According to Rosselli, SEIU’s Andy Stern and Anna Burger are “spending millions of dollars of members dues to orchestrate an implosion of UHW.” He repeatedly charged SEIU with implementing a “false democracy.”

SEIU spokesperson Michelle Ringuette disputed UHW’s entire account of the conflict. Ringuette told me yesterday that Rosselli previously agreed to support a single union for the state’s longterm caregivers, but changed his mind once he concluded it would reduce his own power. She also noted that UHW had itself grown through the type of mergers that it now claims are anti-democratic, and that Rosselli himself was appointed, rather than elected, to the position as leader of the newly-created UHW

For many activists, the SEIU-UHW transcends the Stern-Roselli dispute and is fundamentally a question of what constitutes union democracy.

SEIU maintains that the jurisdictional election that could weaken or eliminate UHW is consistent with SEIU’s Constitution, and with the votes of delegates at SEIU conventions. It sees this process as clearly democratic, with UHW’s refusal to accept the legitimacy of these decisions as akin to a single state refusing to follow federal law.

In contrast, UHW argues that since the nationwide mergers resulted in an International Executive Board (IEB) that is primarily appointed by Andy Stern rather than elected by workers, its votes are not really democratic. UHW also believes that the nature of the election to be ratified in January violated the SEIU Constitution, both by artificially limiting workers choices and by the lack of reasonable notice to UHW.

Underlying both positions is different approaches to both organizing and bargaining. SEIU believes that the policies handed down by its Executive Board in these areas should be binding on all of its locals; UHW believes its track record of winning good contracts and building membership through what some believe is a more combative approach should be respected, and that union democracy should allow for diverse local strategies to achieve the same goal.

So both sides claim to be advancing union democracy, while alleging that their adversaries are subverting it. And while the labor academic community, and those California elected officials who have taken sides, overwhelmingly support UHW, SEIU appears undeterred.

The Executive Board is expected to vote in January to shift UHW’s long-term care members to a new statewide local. UHW would quickly file suit to enjoin the Board’s vote, with additional lawsuits following on both sides. The courts would ultimately resolve the jurisdictional and legal issues, though it is possible that a decision following recent SEIU hearings on putting UHW into trusteeship could supersede the election dispute (though not end the legal wrangling) …

Meanwhile, both sides recognize that this fight is particularly untimely. SEIU spent more money to elect Barack Obama than any other organization, and has an ambitious plan to push universal health care and the Employee Free Choice Act (EFCA) during the new Administration’s first 100 days. SEIU believes that progress on these issues will not be slowed by its dispute with UHW, but Roselli and other speakers are raising issues that business groups are likely to repeat in opposing both measures.

For example, Rosselli noted yesterday that Andy Stern has stressed the importance of “choice” in both SEIU’s health care proposals and in EFCA’s campaign for the right of workers to choose to be in unions. But Roselli argues Stern is contradicting this theme by rejecting UHW workers right to “choose” their union or leadership.

This captures the current mood of many UHW supporters, who believe that Stern will stop at nothing to destroy what many believe is one of SEIU’s most internally democratic locals.

Neither side says they wanted this fight, but it proceeds unabated, and the hostility and anger is escalating.