SEIU to “Create WWIII” to Drive NUHW Out of Hospitals 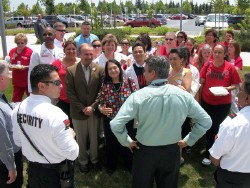 According to published minutes from an April 10, 2010 SEIU-UHW meeting, SEIU plans to “Basically create WWIII” in order to drive NUHW organizers and supporters out of California hospitals. SEIU specifically intends to closely coordinate with Kaiser Security and Human Resources Department to “remove NUHW” from hospital cafeterias and other areas, and to act “as a GROUP” in making NUHW supporters – who are currently SEIU members – “uncomfortable.” SEIU is aggressively carrying out this strategy. On May 10, SEIU’s Latasha Winslow-Beavers sent a fax to Kaiser Roseville HR Director Karen Martins alerting her to the planned visit of legendary UFW leader and NUHW supporter Dolores Huerta to Kaiser Modesto Medical Center on May 14. Martins forwarded the fliers to Henry Diaz, who heads Kaiser’s Northern California HR Dept. Diaz told NUHW the next day that Huerta’s planned visit was a “violation of our solicitation policy,” even though the event flier that SEIU faxed to him never mentioned Huerta would be “soliciting” workers for signatures. When Huerta appeared, met with workers and refused to leave hospital grounds, Kaiser called the police.

After landslide defeats to NUHW in the first set of Kaiser Hospital elections, SEIU has turned to desperate measures to prevent the loss of an additional 50,000 Kaiser workers later this year. These measures include SEIU’s coordinating with Kaiser management to drive NUHW out of hospitals, and regularly using intimidation and even violence against NUHW supporters (who are current SEIU members).

From “Implosion” to “WWIII”

When SEIU international was battling with its former SEIU-UHW leadership in 2008, it drafted a strategy designed to cause its third-largest local to “implode.” Now SEIU is going further, implementing a plan to “Basically create WWIII” inside Kaiser Hospitals.

SEIU’s plan is outlined in its “UHW Steward Council Meeting Minutes, Baldwin Park Medical Center, April 7, 2010.” Although the meeting focused on strategies to defeat NUHW, contract specialist Selma Rodriquez – paid by Kaiser to deal exclusively with contract issues – was present throughout and Kaiser paid the workers during the meeting.

Angela Hewitt, SEIU-UHW’s Baldwin Park Coordinator, urged that SEIU “Basically create WWIII.” She and the group agreed that SEIU must “let NUHW know that they have no right to be here, and this is UHW territory.” Hewett suggested that SEIU supporters tell Kaiser’s Human Resources (HR) Department that they were “upset” by the presence of NUHW, and that the rival union should be removed from the workplace (click here to view page 5 of the minutes, which includes these statements.)

As a model for how SEIU should deal with NUHW, Hewitt cited SEIU’s success at forcing NUHW out of St. Francis Medical Center in Lynwood, where SEIU backers acted as a group and “confronted NUHW and made them feel uncomfortable.” She noted how SEIU had succeeded by calling HR to “demand NUHW is removed,” and by calling hospital security to “Remove NUHW.”

SEIU’s citing of St. Francis Medical Center in Lynwood as its model is telling. The NLRB found SEIU guilty of an unfair labor practice there for threatening to have the hospital terminate workers “because they engaged in activities in support of the National Union of Healthcare Workers.”

But SEIU’s intimidation activities extend to many other facilities as well. On June 7, 2010, the NLRB will hold a trial against six SEIU staff members for illegally threatening and intimidating NUHW supporters and violating their rights under federal labor law.

The joint SEIU-Kaiser strategy is best seen it their campaign against allowing Dolores Huerta to meet with workers. Here’s how it proceeded:

On May 10, SEIU’s LaTasha Winslow-Beavers faxed to Kaiser HR Director Henry Diaz fliers produced by NUHW announcing hospital visits by Huerta and NUHW’s Ralph Cornejo. Less than 24 hours later, Diaz emailed Cornejo saying the planned visits were “in violation of our solicitation policy, and will not be permitted.”

On May 14, Huerta appeared at the Modesto Hospital cafeteria and met with workers. Kaiser asked her to leave, but she refused. In response, Kaiser closed the cafeteria, forcing Huerta to continue meeting with workers outside the building.

It is worth noting that at no time did Huerta ask any worker to sign any decertification papers or other documents, the conduct that would constitute “solicitation.” Nor did the fliers sent by SEIU to Kaiser suggest she would be soliciting, yet Kaiser’s HR Director immediately concluded that Huerta would violate its solicitation policy.

While Huerta was meeting with workers outside the building, Kaiser security appeared and told Huerta that if she does not leave they will call the police. She refused, Kaiser called the police, and Huerta left to avoid further conflict.

At one level, SEIU succeeded on May 14 in using Kaiser’s HR Department and security staff to “remove NUHW” from Modesto Hospital – if only for a few hours. But SEIU could pay a steep price for this “success.”

First, Dolores Huerta has appeared at hundreds of events on behalf of SEIU workers over the years. In my book, Beyond the Fields, I describe how she went to the University of Miami in 2006 to support an SEIU organizing campaign among campus janitors. Huerta went to Miami at the request of her old UFW colleague, Eliseo Medina, and helped persuade the school’s President Donna Shalala to do the right thing.

Medina is now an SEIU Executive Vice-President and the co-trustee of the SEIU-UHW local that is faxing documents to Kaiser to prevent Huerta from talking to workers. After years of enlisting Huerta as a credible ally in its campaigns, SEIU’s collusion with Kaiser management to suppress her speech could strike many as hypocritical.

Second, when Medina was a young UFW organizer, he saw how Central Valley growers aligned with the Teamsters union in order to prevent the UFW from representing farmworkers. The growers preferred the Teamsters because they got weaker contracts, no prohibitions against dangerous pesticides, and did not have to deal with a union backed by a broad social movement.

In light of SEIU’s alliance with Kaiser management to “remove NUHW,” Kaiser workers could wonder what concessions SEIU is giving Kaiser in exchange. The Teamsters aligned with growers because it had no base among workers in the fields; it would seem that if SEIU had the majority support of workers, it would not need management’s help to defeat NUHW.

I asked longtime UNITE HERE Local 2 President Mike Casey if his union ever asked the Hilton or another hotel’s HR or security staff to remove rival unions from the premises, or threatened to coordinate with hotel management to fire unionized workers. Casey said his union would “never” contact the employer in such cases. He said that there was an “unwritten code” that inter-union differences are worked out without involving the employer, and that SEIU had clearly “crossed the line.”

Casey also told me, “This is exactly how a company union operates. Rather than putting workers interests first, SEIU is acting by all means necessary to annihilate NUHW, even if it means aligning with management.”

Unfortunately, the analogy between SEIU and the Teamsters of the 1960’s and 70’s extends to their mutual reliance on thuggery and intimidation. Consider what SEIU meant when it began invoking its “WWIII” plan:

* At the same Modesto hospital where Kaiser sought to bar Huerta, a busload of 70 SEIU staff entered the cafeteria three weeks earlier and encircled a group of NUHW supporters; Kaiser security did nothing to intervene.

*At Kaiser Sunset, whose nurses have already chosen NUHW and technicians will vote later this year, SEIU activist Darren “Tree” Wallace confronted a registered nurse who was talking to a worker about NUHW. Wallace is about 6ft 5 inches tall, and serves the intimidator role that burly Teamster goons once served against UFW organizers in the fields.

Wallace makes a practice of taking pictures of NUHW supporters. When the nurse – at least a foot shorter than Wallace – put her hand up to block her face, Wallace grabbed her arm. She called the police and charges against Wallace are pending.

*At Kaiser’s Roseville Hospital, a group of nine SEIU workers and staff – one of whom was another Kaiser-paid contract specialist (Audrey Martinez) whose duties are supposed to be limited to contract administration encircled NUHW supporter Frank Engles and tried to remove his NUHW lanyard from his neck and replace it with an SEIU lanyard. Two other NUHW supporters were also encircled, and one was pushed in the chest.

*In early May NUHW organizer Gary Guthman was eating lunch with two NUHW leaders at Kaiser South Bay when they were surrounded by twelve hostile SEIU stewards and reps, three of who sat at their table and refused to leave. Kaiser security and HR representatives did nothing to stop them.

*On the night of May 18, CNA member Robert Marth was handing out decertification petitions to NUHW supporters at Kaiser Hayward Hospital. An SEIU staffer grabbed the petitions, shoved Marth in the chest. Marth has filed a police report.

There are many more such incidents. If they sound familiar, it is because they are part of SEIU’s common playbook designed to “remove NUHW” and “Basically Create WWIII.”

Fred Ross, Jr., who witnessed Teamster intimidation as a UFW organizer and went on to organize hospitals for SEIU before leaving in 2009, says that “SEIU’s pattern of violence and bullying tactics directed at Kaiser workers, and its collusion with Kaiser management, is shameful.”

SEIU President Mary Kay Henry and SEIU-UHW Trustee Eliseo Medina must be held accountable for SEIU’s practicing thuggery and intimidation against its own members. A union that won widespread media and academic support as representing the “next wave” of the labor movement has sadly returned to the worst tactics of Teamster hooliganism and employer collusion to maintain its power.