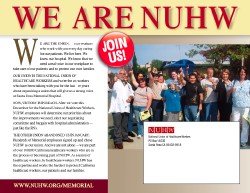 SEIU, whose mission includes the unionization of hospital workers, is now waging a full-scale campaign to prevent over 600 workers at Santa Rosa Memorial Hospital from joining NUHW, a rival union. SEIU’s effort follows its abandonment of its own union organizing drive at the facility, and its success at convincing workers to vote for “no union” in the December 17 election would ensure these workers remain non- union for years. In response to SEIU’s actions, longtime SEIU supporter Monsignor John Brenkle recently condemned what he described as SEIU’s “anti-union campaign,” and revealed that SEIU had rejected efforts by former Labor Secretary Robert Reich and himself to negotiate ground rules that would avoid negative campaigning and ensure a fair election.

When SEIU devoted millions of dollars and hundreds of staff to battling NUHW over Fresno home health care workers last spring, the struggle was fierce. But the stakes at Santa Rosa Memorial Hospital are much higher. An SEIU “victory” would defeat unionization for over 600 workers in Santa Rosa, and prevent NUHW from using its success as a springboard for organizing SJHS’s over 9000 non-union workers at its hospitals across California.

Few could have imagined one year ago that SEIU’s number one hospital organizing drive in 2009 would focus on preventing workers from joining a union.

After SEIU placed its UHW local in trusteeship last January and ousted its former leadership, it faced a choice about its organizing drive at Santa Rosa Memorial Hospital. It could proceed to push for a union election, or it could give up the campaign and focus its resources elsewhere.

SEIU chose the latter course. As Nancy Timberlake, a 24-year hospital employee who has been trying to get union representation at the hospital since the late 1990’s, told me, “we heard nothing for weeks. It became clear that SEIU had deserted our campaign.”

NUHW staff had been part of SEIU’s Santa Rosa organizing drive, and with SEIU no longer involved, felt obligated to help fulfill workers’ longstanding desire for a union. The workers filed petitions for an NLRB election on April 13, which suddenly galvanized SEIU into action to block the workers from unionizing.

Because SEIU was viewed as having abandoned the workers, it had no chance to win majority worker support in a fair election. SEIU then faced a choice: allow rival NUHW to prevail, or help management defeat unionization.

It is currently making an all-out push to achieve the latter.

SEIU justifies its actions by saying “it does not serve the interests of the workers” to have any involvement with NUHW. SEIU has bombarded workers with flyers that neither criticize management nor address specific workplace issues – instead, the flyers overwhelming consist of harsh attacks on the credibility, integrity, and legitimacy of NUHW.

To give a sense of how little support SEIU has in the facility, the only worker quoted in the seven flyers I reviewed does not even work at Santa Rosa Memorial Hospital. Instead, she works at Kaiser Hospital in San Rafael.

It is obvious from SEIU’s messaging that it knows it has no chance of winning majority support on December 17, and that its real goal is getting workers to vote for “no union” rather than for NUHW. And since SEIU believes that workers are better off with no union than with NUHW, it felt obligated to engage in the type of negative campaigns that routinely defeats union organizing drives, using tactics the labor movement wants EFCA to prevent.

Last week, SEIU rejected an offer by former Labor Secretary Robert Reich and Monsignor Brenkle to mediate between SJHS, SEIU, and NUHW. The offer sought to avoid the anti-union arguments now coming from both SEIU and SJHS, and to negotiate ground rules for a Fair Election Agreement.

Reich is no stranger to union organizing efforts at Santa Rosa Memorial Hospital, having testified at a Congressional hearing in 2007 on the need for fair election agreements at this facility and others. Monsignor Brenkle played a key role in the Santa Rosa diocese becoming the first in the nation to adopt the principles set forth by the Bishops for governing union elections in Catholic workplaces.

Both NUHW and SJHS agreed to the Reich-Brenkle offer, but SEIU refused. This led Monsignor Brenkle to conclude:

This latter comment was no doubt aimed at Eliseo Medina, SEIU Executive Vice-President and SEIU’s chief spokesperson on the Santa Rosa struggle. Medina got his start with the UFW, became one of its great organizers, and was once badly beaten up by the Teamster thugs that routinely attacked UFW staff and supporters.

What an SEIU “Victory” Means

SEIU’s efforts to convince workers to reject unionization are now being joined by an increasingly anti-union employer campaign. SJHS’ campaign features precisely the type of one-to-one contacts and “voluntary” staff meetings that both EFCA and the Bishops’ June 2009 agreement, Respecting the Just Rights of Workers: Guidance and Options for Catholic Health Care and Unions, were designed to prevent.

So an SEIU “victory” in Santa Rosa would have the immediate impact of denying unionization to over 600 workers, who are unlikely to ever trust any union again. It would also prevent NUHW from getting a foothold in the St. Joseph’s Health Systems chain, where SEIU is not currently organizing and whose 9000 non-union workers would remain that way.

And if SEIU ever decided to return to the business of organizing hospital workers, it would find that the Catholic institutions do not feel bound by a June 2009 fair elections agreement that SEIU itself violated less than six months after the press conference.

One wonders if the American labor movement can afford such a “victory.”