SEIU Claims To Have NUHW On the Run 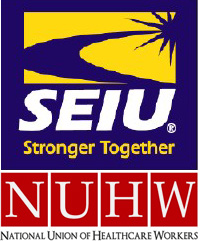 After a bruising and expensive struggle in Fresno, SEIU now claims that rival NUHW is “coming apart at the seams.” According to SEIU, NUHW’s failures have “sparked intense infighting and finger‑pointing,” and “the focus has now turned to the question of whether the organization can survive. ” Is this wishful thinking, or an accurate assessment? Since forming last January, NUHW has been frustrated in its efforts to win members by SEIU filing NLRB petitions preventing the holding of decertification elections. The lack of members has left NUHW without funding to maintain staff, which has required some of its organizers to seek other jobs. But SEIU exaggerates and even falsifies claims of NUHW’s alleged internal problems, and while there is credence to its charges that NUHW has not met expectations to date, its latest salvos appear geared to break the spirits of NUHW staff and supporters. Here’s what’s really going on.

As in director Akira Kurosawa’s legendary 1950 Japanese film, Rashōmon, each side of the SEIU-NUHW struggle often has drastically different interpretations of the same set of facts. And, as in their predictions of the outcome of the Fresno homecare election, both sides can be proved wildly wrong.

So although discussing this conflict ensures a critical response, here’s my assessment.

When the leadership of SEIU-UHW decided to break from SEIU and form a new union, it faced a major obstacle: money. NUHW hoped to quickly get workers at Kaiser and Catholic Healthcare West hospital chains to file decertification petitions, with prompt elections resulting in the shift of these workers and their dues from SEIU to NUHW.

But SEIU successfully challenged these workers ability to hold decertification elections until 2010. SEIU also filed a broad array of NLRB charges to prevent other SEIU-UHW workers who had filed decertification petitions from obtaining elections that could have transferred their affiliation — and dues money — to NUHW.

This left NUHW with acute financial challenges it has yet to surmount.

Some of the charges SEIU filed to block workers from holding elections were truly bizarre. For example, one charge claimed that political consultant Clint Reilly was actually controlling NUHW, making it an illegal “employer dominated” union (Reilly owns a building that employs SEIU janitors.)

As crazy as the allegation, decertification elections were held up for months as the NLRB investigated the charge. And no elections meant no dues coming in to fund NUHW.

SEIU: By All Means Necessary

SEIU makes no excuses for its filing charges regarding Reilly, or for denying workers desires to hold decertification elections on other grounds. SEIU sees NUHW as a “rogue” union whose efforts to “steal” SEIU workers must be fought by all means necessary.

SEIU has 33% of its members in California, and SEIU-UHW reportedly pays over $30 million annually to the SEIU international. SEIU will not let this money and membership go without an all-out fight.

And SEIU’s approach even applies to frustrating union organizing efforts by unorganized workers, such as those at Memorial Hospital in Santa Rosa, part of the St. Joseph’s Hospital chain. After NUHW did all of the work to get the workers to sign cards, and the union planned to meet with management to prepare for a representation election, SEIU sought to intervene in the process.

This will almost certainly set back any election date. A hearing on SEIU’s intervention request occurs on September 24.

According to SEIU, “more than 35,000 SEIU members have rejected attempts by
the former officials to lure them to NUHW.” This total apparently represents those voting for SEIU in Fresno (an election SEIU won by less than 300 votes) as well as the estimated 18,000 San Francisco home health care workers — none of whom cast ballots against NUHW — for whom a decertification election will not be forthcoming.

But SEIU’s electoral success is primarily attributable to its ability to block elections in any shop where it could lose, regardless of the number of workers signing decertification cards. SEIU allowed the Fresno election because it was confident of victory, and after spending millions barely prevailed.

As for San Francisco’s home care workers, SEIU claims “they overwhelmingly want to stay with their current union,” and that NUHW’s “failure to even get an election in their home base in San Francisco is a major blow.”

Neither of these assertions is correct.

First, it is unclear whether the vast majority of San Francisco home care workers, 50% of whom are monolingual Chinese-speaking, are even clear on the difference between SEIU and NUHW. And NUHW’s problem in San Francisco was not gathering signatures; rather, it lacked the resources to prevail over SEIU’s extremely well funded campaign.

After NUHW launched its San Francisco drive, it learned that the NLRB was on the verge of ending SEIU’s blockade of as many as 70 elections across the state. SEIU heard the same rumors, which is why its top officials from Texas and Arizona came to California, along with a key Florida staffer and the chief of its national health services division.

NUHW held off in San Francisco to conserve its scarce resources for the upcoming hospital elections, where its base is strongest. And after Mike Casey and UNITE HERE Local 2 joined NUHW’s efforts to win a decertification election for San Francisco’s home care workers, SEIU is right to deem NUHW’s failure to go forward as a setback. But if SEIU really felt it dealt NUHW a “major blow,” its out of state staff would have returned to their regular jobs, rather than remaining in California to work on upcoming hospital elections against NUHW.

It’s required more money and staff than anticipated, but SEIU has prevented NUHW from obtaining the members and money it needs to survive long-term. Yet rather than honestly trumpet this accomplishment and stress the tough battles ahead, SEIU also issued an absolutely false email alert regarding the alleged defection of longtime NUHW supporters Charlie Ridgell and Dan Martin from the NUHW cause.

Clearly, the defection of either longtime Rosselli supporter would give NUHW supporters pause, and build support for SEIU’s contention that NUHW is imploding. But neither charge is true.

I know of Ridgell because of his frequent letters to the editor praising NUHW and condemning SEIU. I asked him about SEIU’s claim — “other top officials, such as Charlie Ridgell, have already jumped ship” — and he replied, “those desperate idiots at SEIU just can’t help lying. They know f_cking well that I haven’t been a top official since the end of 2001 when I stopped directing the nursing home division at Local 250. I was never a top official in NUHW and they know that too.”

As for Martin, one of Sal Rosselli’s top aides, SEIU claims that he “is actively seeking work and telling prospective employers that he wants to get out of NUHW.” Martin, like many former SEIU-UHW staff who cannot afford to live without an income indefinitely, may well be seeking paid employment. But he was on an NUHW conference call after SEIU’s email was issued, and people I talk to insist that he remains as committed as ever to NUHW’s cause.

The fact is that NUHW staff has proved remarkably loyal despite receiving no salaries since January. And while some leave disappointed if not disaffected over NUHW’s failure to provide them with paid organizing jobs, I am not aware of any who question NUHW’s efforts or, as SEIU also suggests, are seeking jobs with SEIU-UHW.

After Sal Rosselli and the SEIU-UHW leadership team quit the union to form NUHW, SEIU predicted that the new union would fail to win any meaningful election. To date, SEIU’s assessment has proved correct.

For all of the political, union and progressive support NUHW has garnered, it must win a major election in 2009 to remain viable when Kaiser and Catholic Health Care West workers potentially vote in 2010. NUHW has maintained the loyalty of the current SEIU-UHW hospital workers — the union uncovered SEIU’s agreeing to Kaiser layoffs before organizing workers against the layoffs it agreed to, as set forth at Adios, Andy!, but it’s hard to see even Kaiser workers voting for a union that has no money or resources by the fall of 2010.

So if SEIU continues its shutout of NUHW for the next few months, it will likely be in a position to claim that its rival survival is at stake. But if NUHW wins some elections and secures enough resources to compete at the major hospital chains in 2010, the power imbalance between the two unions could change dramatically.

Randy Shaw discusses SEIU’s previously successful organizing strategies in his book, Beyond the Fields: Cesar Chavez, the UFW and the Struggle for Justice in the 21st Century.