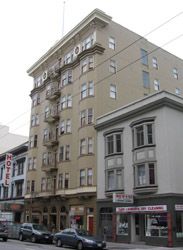 Imagine paying a monthly fee for a lightweight bed-side table, a small dresser, and a single-wide bed that over the years added up to almost $1500. Then imagine that fee more than tripling. Welcome to the world of the Crescent Manor Inn residents, Section 8 recipients living in the Tenderloin who now face a rent hike due to an increase in furniture rental fees. The increase, enacted by property managers at the John Stewart Company, has many of the building’s 88 tenants up in arms. Now, they’re fighting back, raising questions about the legality of both the increase and the fees themselves.

The debate over the furniture fee began last April, when property management informed everyone at Crescent Manor that their $8 monthly charge would be increased to $25. Two tenants questioned the hike and sought legal help, and obtained it recently.

The fee-hike would severely affect Crescent Manor tenants, many of them disabled, seniors, or, like 3-year resident Royce Merritt, living on set monthly incomes.

“I think it’s ridiculous,” said Merritt. “I think they’re taking advantage of people on low incomes and fixed incomes. All the people in here are disabled or senior citizens. I just think its wrong.”

Charging a monthly fee for furniture at all may also be illegal. No legal precedent currently appears to exist that would allow for such a practice. The practice seems even more egregious for an agency operating under the federally funded Section 8 program, which provides vouchers to low-income people to pay their rent.

Crescent Manor management, however, claims the fees are perfectly legal. They believe a provision exists within regulations for Housing and Urban Development (HUD) – the federal body that runs Section 8 – to allow for such fees. Tenant representatives, however, counter that such an interpretation represents a stretch of the law.

From a common sense perspective, the fees seem odd in another way. The motel-like furniture being charged for could easily be purchased for a small lump sum – at most a few hundred dollars. The Crescent Manor houses many long-term residents, some of them tenants for over 15 years, meaning many have already paid three times the original cost of the furniture in monthly fees.

One of those people is Ruby Sweet, a Crescent Manor resident since 1991. Sweet can’t believe that after all the money tenants there have paid, they would be asked to pay more.

Legal threats do not appear to be wavering the John Stewart Company’s pursuit for more money, however, leaving the case a likely candidate for court. Beyond Chron will keep its readers updated on the case.