Is there a secret to getting kids to eat veggies? 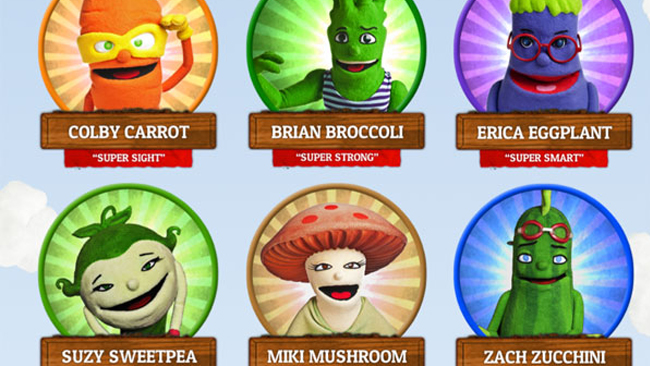 Those headlines refer to a study on marketing to kids, just released by the Cornell Food and Brand Lab. The promotion for the study implies that all it takes to get more vegetables into kids’ diets is the use of branded cartoon characters in the school lunch line. Researchers observed how many students served themselves from the salad bar with and without the use of produce-pushing characters like Brian Broccoli, on banners and in videos displayed right in the cafeteria.

The study posts some eye-popping numbers. “In schools where videos were shown on TV monitors in addition to the banners, 239% more students selected vegetables from the salad bar!” says the Cornell Lab’s promotion.

Have these researchers found the low cost, low effort silver bullet to getting kids to eat their broccoli?

Not exactly. CNN claims that the study shows “Branded marketing tactics — from banners to commercials — nearly triple the likelihood of a child choosing to eat vegetables at lunch,” but that’s not really accurate. The research does not show that any more kids ate veggies when exposed to the “branded marketing”, but rather that more kids chose to put those items on their lunch tray.

Putting food on your plate is a whole lot different than actually eating it, as anyone who has ever visited a Las Vegas casino buffet can attest.

Research showing more kids “choosing to eat” the marketed veggies would require what is called a “plate waste” study, where the amount of food kids put on their tray is measured, and then the amount they throw away at the end is measured, to determine how much was actually eaten. That’s not what happened here.

School food service professionals have observed many reasons why kids who take veggies may not ultimately end up eating them. The Kids’ Safe and Healthful Foods Project spoke with some of these pros, who identified reasons such as fiber-rich produce taking longer to eat than quick-chew mush like chicken nuggets. Other reasons include too short lunch periods, kids preferring to chat with friends rather than eat, or kids not being as hungry as they thought when they chose the food.

First graders with missing front teeth may have trouble biting into raw veggies like carrots, while those whose permanent molars are emerging may not want to chew much at all.

It’s not much of a stretch to imagine that a child who was convinced by hard sell marketing to put broccoli on her plate might find, once seated, that she doesn’t really want to eat the broccoli after all. In fact, “taking” is just one step in the chain of events to getting kids to willingly consume more produce.

To be fair, Cornell Food and Brand Lab does not claim that students in the study actually ate the produce they chose. That mistake was made by the gushing media, who apparently conflate “taking” with “eating.”

But it’s easy to see how some reporters made that mistake, especially when they don’t have time to read through the whole study, relying instead on a brief summary and the promotional materials for the study itself, both thoughtfully provided by Cornell Food and Brand Lab.

This poster “explaining” the study starts out “Food marketing aimed at children often entices them to eat fast food and sugary foods, but what if marketing was aimed at getting kids to eat fruits and vegetables?”

Call me crazy, but the repeated use of the phrase “to eat” makes me assume that the study results will be about what kids, you know, ate. Not about what they put on their plate.

Still, kids choosing to take fresh produce has to be seen as a good first step toward consumption by anyone who cares about kids’ health. Does that mean we should all be happy that Cornell’s marketing tricks had some effect?

The issue of whether or not it is okay to market “healthy” food to kids using cartoon characters or other junk food marketing techniques has been hotly debated for years, including right here in Beyond Chron. In September 2014, Bettina Elias Siegel presented the pros of the issue, while Casey Hinds countered with the cons.

Perhaps the strongest argument against marketing to children, even when done with the best of intentions to help them make better choices, comes from a 2013 article by Michele Simon, President of Eat Drink Politics, and Susan Linn, founder of the Campaign for a Commercial-Free Childhood. They wrote:

“The developmental vulnerabilities of children, along with the legal, ethical, and political pitfalls of encouraging the food industry to target kids, make marketing food to children harmful regardless of nutritional content…. Unlike adults, young children do not have the cognitive capacity to fully understand the purpose of advertising. Very young children cannot even distinguish between a TV program and a commercial. Until the age of about eight, they don’t really understand the concept of selling and they tend to believe what they see.

“Moreover, only 40 percent of 11 and 12 year olds have a full understanding of persuasive intent—that every aspect of advertising is designed to convince them to do things they might not do otherwise.”

About this Cornell Food and Brand Lab study, Michele Simon told me, “Studies like these and calls to market healthy food to children continue to distract us from the real problem at hand: The incessant marketing of junk food to children. Parents can do their jobs just fine once politicians finally stand up to the corporate bullies exploiting children.”

Nancy Huehnergarth, food reform advocate and consultant, agrees. “Trying to counter the food and drink industry’s $1.8 billion a year in child-targeted junk food marketing with a school-based vegetable marketing program is just a way to temporarily cure the symptoms instead of attacking the root causes. Other countries such as Canada, Ireland, Chile and Taiwan are taking real action like banning fast food marketing aimed at children and restricting junk food advertising to kids.”

But Jessica Donze Black, director of the Kids’ Safe and Healthful Food Project, takes a more optimistic view. She says, “Finding ways to attract students to healthy foods is an important part of a school nutrition director’s job. Kids learn to eat well through their experiences trying new foods, and marketing, together with serving strategies and nutrition education, can inspire them to give more nutritious choices a chance. This study offers some promising practices for schools to test out as they work to help all kids develop healthy eating habits.”

Apart from ethical concerns, there’s another reason to be wary of these results. The section of the study on funding states, “All phases of this study were supported by the Cornell Food and Brand Lab, the Cornell Center for Behavioral Economics in Child Nutrition Programs (USDA ERS/FNS grant 59-5000-0-0090) and Founders Farm. Super Sprowtz branded materials for the interventions were provided by the Bernard Group.”

Super Sprowtz LLC is described as “a children’s multi-media program focused on nutrition and wellness education for pre-school to elementary school aged children,” by its founder, Radha Agrawal, who also started Founders Farm “to bring innovative story-driven nutritional educational to children wherever we could reach them.”

Cornell Food and Brand Lab pitches its services saying, “Anywhere food decisions are made, we’ve looked at what are the hidden factors that drive selection, consumption and experience.  We’ve helped dozens of companies develop healthy, profitable, ways to help people eat better…. Some of these projects can be handled through grants and contracts. Other arrangements are through gifts to the Lab.”

“Taking vegetables is not the same as eating them, and the plate waste needs to be checked by investigators independent of funding source.  Otherwise, this appears to be yet another sponsored study with results favorable to the sponsor’s interest—whether the result of conscious or unconscious bias, we are unlikely to know.

So is there really a “superpowered secret” to getting kids to eat more veggies? Seems unlikely, but if there is, for now it remains a secret. This study does not show that more kids ate veggies as a result of marketing, just that more kids put veggies on their plate. As nutritionists love to say, “It’s not nutrition until they eat it.”