Seattle and the Demons of Ambition, by Fred Moody 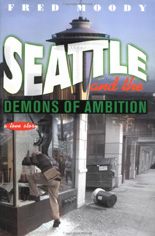 It is a rare for a book to raise new questions about such diverse subjects as technology, ambition, progress, the impact of the dot-com boom, urban development, and the true agenda of Bill Gates. Even rarer is the book that compels readers to re-examine their firmly-held assumptions about such issues. Fred Moody’s Seattle and the Demons of Ambition succeeds on both scores.

Although Seattle is the backdrop, the issues Moody raises apply readily to San Francisco. Both cities have had their economies shift from blue-collar maritime and light industrial to office and high-tech, enriching and enraging those impacted and dividing residents over the benefits of growth.

Moody’s own career parallels the economic shifts he describes. Originally a typesetter, Moody found his career rendered obsolete by the rise of computers. He then became a writer and then managing editor for the Seattle Weekly, whose anti-growth politics resembled our local Bay Guardian.

Despite technology’s negative impact on his own career, Moody is no Luddite. He is fascinated by the new world of technology, and by the emergence of the frenetic, work-obsessed corporate culture of Microsoft amidst laid-back, unambitious Seattle. Moody is torn between his affection for the Seattle of the past and his recognition that the new technology he so admires carries with it—through the high-tech work ethic, the raising of area incomes, and the upscale development schemes — the seeds of Old Seattle’s destruction.

Moody marvels how for all its laid-back traditions, Seattle in the 1980’s spawned Microsoft, Starbucks, and Amazon.com. He covered these companies in their early years, and while he knew he could get rich working for them, his commitment to a different set of values prevented him from making the move. Moody’s decision not to pursue a more lucrative career path is not made easily; he often chides himself for staying loyal to a questionable moral position while risking his family’s economic security. When Moody describes how friends and colleagues were affected by their pursuit of high-tech riches, his different choice becomes understandable.

Moody openly acknowledges the positive side to a world of material gain and economic security that he has rejected. While he opposes the continual plans to transform a town of unambitious artists and blue-collar workers into a modern, east-coast like, “major league” city, he recognizes that Microsoft’s success and the dot-com boom made such a transformation inevitable.

Moody’s experience at Microsoft and his interview of Bill Gates in the early 1990’s is illuminating. Moody is prepared to despise Gates as a symbol of the new materialism that is destroying old Seattle. To his (and the readers) surprise, Gates comes across as obsessed with using technology to improve the world. Moody corrects some of the common misperceptions about Microsoft (particularly is relationship with Apple), and concludes that Gates was virtually the only person in the high-tech field he had met who was not primarily motivated by money.

But Moody’s appreciation of the benefits of new technology does not mean that he pulls any punches in criticizing its impact on Seattle’s physical landscape and on the many young people who sacrificed their independence -and their souls-to sell out to the highest bidder.

For example, the rise of Microsoft and the high-tech boom corresponded with the emergence of “grunge” rock and the “Seattle Sound” exemplified by Nirvana, Pearl Jam and the Screaming Trees. Nirvana’s Kirk Cobain is the most high-profile symbol of the Seattle artist for whom money brings anguish rather than happiness, and Moody cites many more.

But the perfect symbol for Moody’s theme is Sub Pop records. After Sub Pop’s founder tells Moody that the underground label is all about values and integrity in a corporatized world, we learn by book’s end that the founder sold the label to Time-Warner for $20 million. He explains to Moody that this will now give Sub Pop artists the exposure they need—and the money he clearly always wanted.

Moody’s ability to connect Microsoft, Amazon, the music industry, Seattle’s professional sports teams, and the WTO protests in 1999 into an extremely readable analysis of how the pursuit of money impacts our selves, families, communities and country is a unique achievement. Equally rare is his avoiding the easy polarities- development and change are always bad, the status quo and opposing growth is always good-that still impact political discussion in San Francisco and Seattle.

I have only spent three days in Seattle, so clearly enjoying this book does not require familiarity with the city. Bay Area readers will have no trouble applying Moody’s insights to our own region.

Moody ends the book by trying to figure out just how lasting was the impact on Seattle of the dot-com boom. It is a question that should also be asked about San Francisco. After the evictions of artists and tenants, and the building of dot-com offices during the late 1990’s, was our city irrevocably or only temporarily changed?

Residential rents remain extraordinarily high due to the boom, but most dot-com buildings now house other uses and nonprofit organizations now inhabit buildings where mass evictions once occurred. Is the spread of high-rise condos South of Market a product of the boom, or instead a function of the city’s longstanding insatiable demand for housing?

These questions have no easy answer, but reading Moody’s book puts recent San Francisco history in better perspective. This is a very special book that readers will think about long after completion.