Searching for Authenticity in Urban Neighborhoods 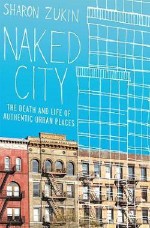 Since the late 1970s, communities that once housed the blue-collar working class, industrial or maritime uses, and/or the small retail businesses trumpeted in Jane Jacobs’ classic Death and Life of Great American Cities, have been transformed. In New York City’s Lower Manhattan or San Francisco’s South of Market, government wrecking balls displaced existing residents and businesses so that the communities could be repopulated by upscale people and uses. In most cases, and in those Sharon Zukin describes in her fascinating new book, Naked City: The Death and Life of Authentic Urban Places (the allusion to Jacobs is intentional), the process of reviving old neighborhoods follows a different path. It begins with the arrival of artists and hipsters attracted by low rents, who then cultivate the “grittiness” and “authenticity” that attracts well-heeled professionals. Their arrival raises rents, and forces the pioneer artists to seek new affordable communities, where the process is repeated. Zukin sees this gentrification process as a search for “authenticity,” using various New York City neighborhoods as case studies for what she sees as a national pattern. Zukin offers an extremely perceptive analysis of how once low-income communities become “destination” neighborhoods, and also raises important questions about privatization of public spaces and the gentrification process itself.

If you are familiar with such New York City neighborhoods as SoHo, the East Village, Union Square, Williamsburg, Red Hook, Harlem, or the Lower East Side, Sharon Zukin’s new book could prove irresistible. I found it very thought provoking and enjoyable despite disagreeing with some of the author’s key arguments.

Zukin’s chief thesis, which few would dispute, is that gentrification depends on transforming neighborhoods so that they are seen as “gritty” and “authentic” by the professional class. The historic cast iron buildings of SoHo, the abandoned warehouses of Williamsburg and Red Hook, and Harlem’s history as the epicenter of African-American culture provide a foundation for the “authentic” urban experience that an upper-middle class tired of strip malls and chain store will pay dearly.

As Zukin correctly argues, and where she critiques Jane Jacobs, this “authenticity” is historically based in ethnic working class communities, and is not simply a function of neighborhoods with ground floor retail and residences above. All of the components for successful urban neighborhoods that Jacobs promoted and is widely identified with — the “eyes on the street,” the crowded sidewalks and small retail businesses that created an “intricate sidewalk ballet” — were a function of a working class culture that has now largely been displaced. The buildings in SoHo and the East Village are authentic, but the population that created the sense of community extolled by Jane Jacobs is largely gone.

And what is unique about New York City is the speed at which gentrification occurs.

When I wrote a chapter about an historic grassroots campaign in Williamsburg for the original version of The Activist’s Handbook in the mid-1990’s, I described it as a low-income community. It was primarily divided by the Satmar sect of Hasidic Jews, and Latinos, predominately Puerto Rican and Dominican Catholics. Today, both communities still thrive and have political clout, but the Bedford Avenue stretch of Williamsburg is completely gentrified, and 3000 new condos sit mostly vacant on the nearby waterfront.

The gentrification of the heart of Williamsburg happened in less than ten years. Zukin explains clearly how a street of vacant warehouses and old-time Polish businesses became quickly transformed into the hotspot for all of Brooklyn. It is an incredible story of “how Brooklyn became cool,” and to my perspective Zukin gets it exactly right.

A critical part of the New York City’s gentrification has been the transformation of long neglected public spaces like Union Square and Bryant Park into incredibly popular and successful areas. Like many progressives, Zukin is troubled that this success did not occur until the city contracted with private entities to operate these and other public spaces. This leads her to then criticize Business Improvement Districts as “maximizing benefits for the rich and minimizing benefits for the poor.”

Zukin does not dispute that the public sector has failed to maintain successful public spaces in New York City, and is understandably troubled that the lack of public sector funds has required a private solution. But she spends considerable time arguing that these private entities are more “repressive,” despite the New York City Police Department’s own long record of illegally repressing public protest in public areas (recall the NYPD’s actions at the 2004 Republican Convention).

While Zukin implies that “public” control means that “ordinary city dwellers” have a say, New York City has long been governed by corporate elites who have ignored grassroots input regarding public areas (recall that NYC’s public government backed the demolition of Bronx public parks for a new Yankees Stadium). I don’t think the ordinary New Yorker had any more control in decision making over Union Square or Bryant Park than they have under private management, and the results are strikingly better for the public.

As for the rich primarily benefiting from park privatization, these folks have private clubs and country homes and do not need to hang out in public areas. It is “ordinary people” who depend upon, and primarily benefit from, improved public spaces, and who have gained the most from privatization.

I also question Zukin’s oft-repeated identification of Starbucks and other corporate chains with “gentrification.” Such businesses more accurately reflect an even more ruinous “homogenization,” and their placement in Astor Place and throughout Manhattan reflect what Zukin describes as the New York’s transformation into a “corporate city.”

The inspirations for “gentrification” are found at Guerrilla Coffee and the Tea Lounge in Park Slope, the MUD Coffee shop in Zukin’s own East Village, and cafes throughout the city that people like Zukin and myself frequent. It’s at these independent, progressive, fair-trade cafés where the young urban hipsters and “gentry” are found, not in Starbucks.

In my view the single most destructive development in the East Village/Washington Square has been the massive buying and building spree by NYU. A large purple flag with the school’s logo accompanies each acquisition, completely changing the feel of the area (and this spree has not been deterred by the economic slowdown.) While Zukin calls NYU’s expansion gentrification, most students lack the disposable income to support upscale businesses, they instead have attracted chain retail establishments that further homogenize once unique neighborhoods.

Finally, Zukin missed a great opportunity to not link her theme of faux-authencity to the originator of “Naked City,” the photographer known as Weegee (aka Arthur Felig). While Zukin refers to the great 1948 film shot of that name shot in NYC, she could have instead linked her title to Weegee’s photo exhibit that gave the movie its name. Since Weegee’s brilliant work was often accused of being somewhat staged, it would have been a great metaphor for the neighborhoods whose “authenticity” Zukin sees as being partially a prop (those interested in Weegee are encouraged to read Weegee and Naked City.

While many talk about gentrification, few books portray it as vividly as Zukin. She makes New York City’s diverse neighborhoods truly come alive, and her book should interest all those who care about the future of urban America.