Schools Shouldn’t Have a Prayer 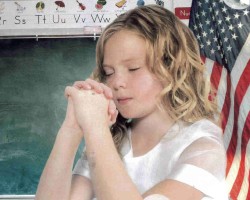 In 1962, the U.S. Supreme Court banned prayer in public schools. Prayer and bible readings had been standard fare since the beginning of this country’s public education system in the 1800s. In subsequent cases throughout the years, the courts continued to do the right thing and limit the involvement of government in promoting prayer and bible readings in the schools.

Now, the Supreme Court has refused to hear the appeal of an East Brunswick, New Jersey coach, Marcus Borden, who was restricted from joining his students in prayer before a school game.

Barry W. Lynn, director of Americans United for Separation of Church and State, told AP that Borden actually used to lead prayers with the student athletes in the locker room. He did the same at the team’s Friday dinners. After several parents complained, he was told to stop praying. So, instead, the coach began to bow his head and kneel on one knee while the players were praying.

Which may seem innocent, but it’s not. Philadelphia Appeals Court Judge D. Michael Fisher spelled it out: “A reasonable observer would conclude that he (the coach) is continuing to endorse religion when he bows his head during the pre-meal grace and takes a knee with his team in the locker room while they pray.”

“The bottom line,” said Lynn, “is people in positions of authority, like a coach, have to be extremely careful about trying to promote their ideas, or implying that if you don’t pray, you may not play.”

John W. Whitehead, president of The Rutherford Institute, a group that supports the “freedom” of people to exercise their religious beliefs everywhere, even in public and in the classroom, disagrees. “We’ve become so politically correct in terms of how we deal with religion that it’s being pretty severely limited in schools right now, and individuals suffer,” Whitehead said.

Religion doesn’t belong in public schools. Other than as part of a course on religions of the world. Which hopefully would also include atheism and agnosticism.

It has nothing to do with political correctness. It’s a constitutional matter. Our government is not allowed to promote any particular religion.

Imagine the nightmare it would have if it did. Would it choose the religion of the people who originally stole this country from native peoples? Would that be the Puritanism of the Pilgrims or the Catholicism of the Spanish? Many of the founding fathers were Deists, which means they believed in a god who did not concern himself with human affairs. Should schools promote Deism?

In 1843 in my hometown of Philadelphia, a riot erupted between Catholics and Protestants over the use, in public school classrooms, of the King James version of the bible. Catholics, who were the minority then, wanted their bible to be taught. Four Protestants and one Catholic were killed.

It makes far better sense to keep religion in private where it belongs.