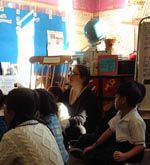 Public schools in San Francisco are facing a potential strike in the coming weeks on the part of our school site support staff, represented by SEIU Local 790. 790 workers primarily include the secretaries, custodians, and cafeteria workers. Staff have been working without a contract for about a year and negotiations have been going on for months with little success, at least looking in from the outside. Teachers are in negotiations now too and optimism is low.

At least 3 major issues are at the heart of this labor dispute: raises or COLAs (cost of living adjustments); health care coverage, and classification (whether someone is permanent or temporary, full or part-time). On all of these issues, 790 has presented a compelling case demonstrating why their demands should be met, especially in regard to raises and expanded health coverage, the two issues most focused on. For instance, 790 members as well teachers have not had raises in several years, yet the cost of living has continued to increase. Additionally, 790 has data showing that their members’ health care coverage is not on par with similar workers in the District or the City.

On the flip side, we know that the District has been facing huge shortfalls, resulting in painful budget cuts last year, and a new round of cuts, starting with school closures, being proposed for this year. Inadequate funding is at the heart of this conflict, starting with the “borrowed” and not yet repaid Proposition 98 monies of last year. The lack money is very real as anyone who has had to help make budget decisions at a school site can attest. Additionally, the District argues that 790 members are paid well compared to other Bay Area districts, that the costs of health care have jumped dramatically and that the funding just isn’t there because of the issues mentioned above.

Several weeks ago when a strike first started to seem like a real possibility, Coleman Advocates, San Francisco EdFund, and Parents for Public Schools of San Francisco issued a joint statement calling for all parties to continue negotiating and avoid a strike, as the consequences would be devastating. This statement and links to financial presentations from the District, SEIU Local 790 and UESF (the teachers union), as well as other information regarding the situation can be found at http://www.ppssf.org/labor.htm.

In addition to consistent pleas from the community to find a compromise and avoid a strike, other activity has been going on in the background. The Mayor has recently been involved in the negotiations, and Ed Harrington, the City Controller and an official fact-finder have each been looking at the data presented by both sides to offer a third-party analysis of what room there might actually be in the budget. As of yet, Harrington has not issued a public report, but was quoted in the San Francisco Examiner as saying that there was room to cover 790’s contract requests for one year but not more. The fact-finding session on the part of the official mediator has been reported to be scheduled to complete around November 20th, although this is not official.

The above financial analyses are instrumental to moving these negotiations forward. The questions regarding the financial situation of the District and the potential for providing an acceptable package to 790 may well only be successfully addressed by these third-parties.