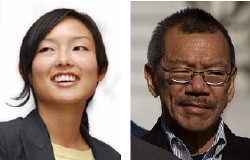 With all the controversy around JROTC, you wouldn’t know that the San Francisco School District has—for the past 23 years—run a program that teaches guidance and leadership training, without any sponsorship by the military. Called Peer Resources, the program trains over 1,000 students a year to act as peer counselors, tutors and conflict mediators. Now School Board members Jane Kim and Norman Yee want the District to launch a program to train students in emergency preparedness—called “Student Emergency Response Volunteers.” Modeled after the City’s NERT program available for adults, it would provide much of the same skills that students liked about JROTC—but geared towards careers in Police or Fire safety, rather than the U.S. military. Kim says that, based upon feedback she received from students, this program will provide some of the same components they liked about JROTC.

With the School District slated to eliminate JROTC by next year, a new pilot program—combining Ethnic Studies with Service Leadership—started this fall at two high schools. Enrollment so far has been slim, but the District also has other leadership programs. For 23 years, ten high schools and six middle schools have run Peer Resources—a peer-to-peer counseling program (funded through Prop H money.) Peer Resources never satisfied the physical education requirement like JROTC, but it’s been in high demand for years. “Kids stay involved in it throughout high school,” said Board President Mark Sanchez, “whereas most JROTC students drop out after they fulfilled their P.E. requirement.”

But Commissioners Jane Kim and Norman Yee now say it’s important to find out what students liked about JROTC—and how these aspects can be incorporated in a non-military setting. With Student Emergency Response Volunteers (SERV)—which they plan to introduce as a resolution on Monday—high school students would get Red Cross CPR training, First Aid training, learn the City’s emergency disaster plans and emergency communications dispatching—and other such skills. “Like JROTC,” said Kim, “it has the element that we’ll be training young people to serve and protect. It’s a good opportunity for us in general to develop more youth leadership programs that young people are asking for.”

The Fire Department already provides a similar free program—NERT, which helps San Francisco adults learn basic emergency training. But it’s only open to residents over the age of 18. By creating a similar program in the public schools, we can provide critical skills for high school students—while giving them the leadership guidance they enjoyed under JROTC. Rather than a program whose purpose is to recruit kids in the military, isn’t it better to train them to pursue careers in fire-fighting and law enforcement?

But an obvious question is—why didn’t the School Board come up with this idea earlier? Answer: they tried. When the Board voted to phase out JROTC in late 2006, they set up a Task Force to explore alternatives to creating a new program. But critics allege that the Task Force was set up with pro-JROTC advocates, who did not want to see a successful replacement created. “I proposed to the Task Force that they come up with emergency training programs,” said Mark Sanchez, “or a program involving police, fire or the Department of Forestry. But they just didn’t follow up on it.”

As activist Terrrie Frye told the Democratic Central Committee during public comment when they considered an endorsement vote on Prop V, “what the hell is the matter with our schools if we need the MILITARY to come in and teach our youth discipline and leadership, and give them guidance?” With a new School Superintendent, efforts to draft a real alternative to JROTC should become a reality. And with leadership from School Board members who are taking the initiative, SERV may end up being the best program available.