School Beat: I am a Public School Parent and I Won’t Back Down (Sorry Maggie!) 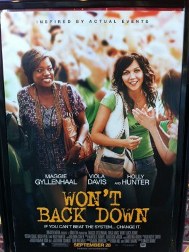 This piece first appeared on The Foggiest Idea.

Last night I went to a media screening of the new film Won’t Back Down, starring Maggie Gyllenhaal and Viola Davis with Holly Hunter. I’ll get right to the point, y’all. I love you anyway, Maggie! Here are some things that are good about this film:

The protagonists are charming and believable. (With the exception of the obligatory love-interest male teacher who was allegedly from Texas yet had a NY accent. Not believable.) The story centers around two mothers who are both in challenging situations and who are willing to risk it all to help their children have a better life. I get that. I understood the characters’ motivations and I rooted for them to succeed.

Maggie Gyllenhaal is her usual adorable, dimply-cheeked self as the working-class single mom with the heart of gold. She fights the good fight to help her dyslexic daughter. Maggie is scrappy and charming and the character is apparently so poor that she can’t afford shirts big enough to cover her cute little belly button. She also manages to keep her clothes on for the entire movie–which probably falls more into the category of things that are less good about this film now that I think about it.

Viola Davis portrays a depressed public school teacher and a parent facing her own demons. She is terrific in this role, and I enjoyed seeing the grace and dignity that we have come to expect from this talented actor. She delivers an earnest scoop of hope to a bummer public school, and, yes, she also corners the market on the whole heart-of-gold thing.

Holly Hunter is a jaded union leader. Did I mention that under her tough exterior she has a heart of gold?

I love the actors. I love the acting. (Minus the dude who couldn’t fake a Texas accent to save his life.) This is your typical feel-good, uplifting story about a plucky band of misfits who work their asses off and make positive changes in the lives of children.

Now, (deep breath), here are some things that are not good about this film:

The plucky band of misfits inflict their positive change by invoking the “Parent Trigger Law,” which allows parents to take over failing public schools and turn them into charter schools. They essentially bust up the teachers union and corporatize a public institution. The film hits you in the face (and slaps you on the back of the head and punches you in the gut and kicks you in the ass really, really hard with a boot) with vehement anti-public school propaganda.

As a public school advocate and self-avowed annoying PTA lady, I had to pause several times during the film to pick my jaw up off the ground in disbelief. I saw this film the evening before helping to launch a major fundraising campaign at my children’s PUBLIC school. I saw this film after spending a day emailing and tweeting around with other PUBLIC school volunteers about ways to get California parents to vote in favor of PUBLIC education this November.

I saw this film with an open mind and what I saw shocked me.

The political agenda of Won’t Back Down is as naked and laid-out as Maggie Gyllenhaal in Secretary: Public schools are terrible. The only way to make them better is to take them over and turn them into charter schools. Oh and teachers unions are evil, greedy, spawn-of-Voldemort’s-demon-seed bastards. The end.

I watched the school go from drab to fab, as grey and brown clothing and classrooms magically transformed into double-rainbows drenched in sunshine and Skittles. This was only after the poor children were released from the throat-crushing death grip of the Darth Vader teachers union.

My children’s PUBLIC school (which is awesome by the way) was on the district closure list a few years ago. And what did the parents do? Did they try to take over the school and turn it into a charter school and force out all the teachers who stayed with the union? No, silly.

They wrote a grant and built a new playground. They created a tutoring program. They started creative and aggressive fundraising programs like DogFest to help bridge the gap between public school funding and unmet public school needs. They volunteered in classrooms and on the playground and in the lunchroom. They went to PTA meetings and School Site Council meetings. They started a parent Coffee Klatch to create community. They were a plucky band of misfits, by golly!

Some even went as far as forming legislative advocacy organizations to make a difference in the lives of children at the state and national level.

So….a friend of mine helped me do a little research and we came up with some nifty insights. Such as the fact that this film is funded by Walden Media, which is owned by Philip Anschutz, a right wing leader whose foundation has campaigned against such things as same-sex marriage and single parents. He is also part of the conservative movement that promotes school “choice” and privatization and corporatization of public schools. This film is also produced by Rupert Murdoch of Fox News fame.

Ah hah! The plucky band of misfits has quite the corporate backer!

I’m not saying don’t see this movie. Go right ahead. But be ready to have an informed conversation after the credits roll. And try to focus on Maggie’s dimples if you get too angry. They are just adorable!

Robin Dutton-Cookston is a San Francisco public school parent, writer and editor. Check out her blog at The Foggiest Idea.