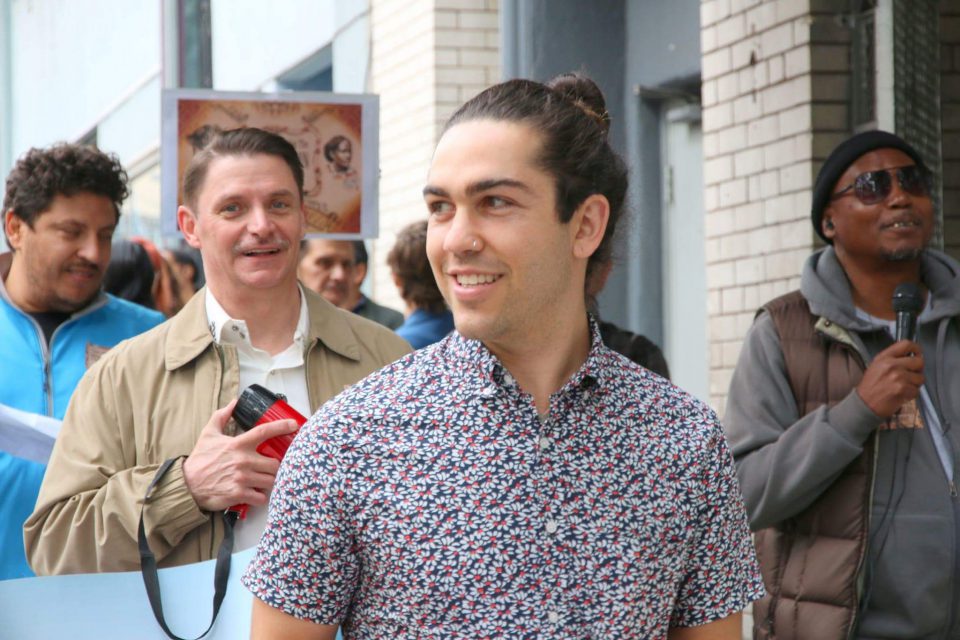 Rio Scharf, organizer for the Tenderloin Housing Clinic’s Central City SRO Collaborative (CCSROC), leaves the gritty streets of the Tenderloin next week for a new neighborhood: the green pastures of Harvard Law School. Scharf follows in the footsteps of his CCSROC predecessor, Karin Drucker, who just finished her first year at Harvard Law.

The Tenderloin  has become an unlikely stepping stone for gaining entry to the nation’s most prestigious law school.

I knew when we hired Karin that she would eventually go to law school. Rio’s plan came as a surprise. He had, however, already demonstrated the ability to perform high attorney legal work.

Scharf became an organizer in what has become a common path: he graduated from UC Santa Cruz’s Community Studies program. It likely offers the best organizer training available in the entire UC curriculum.

After working with tenants in Oakland Scharf took a job working with public housing residents for the Bernal Heights Neighborhood Center. When Drucker took a new position at the Tenderloin Housing Clinic involved with housing people leaving the criminal justice system, Scharf applied to replace her and was hired.

I quickly saw that Rio had a trait that I value most highly in young staff: intellectual curiosity. He wanted to know how the Tenderloin, SRO’s and San Francisco politics had gotten to this point. Although this background is critical to understanding where policy needed to go, I have been struck by how many San Francisco activists see themselves as policy experts when they know nothing about the city pre-Gavin Newsom or even pre-Ed Lee.

Among Rio’s top responsibilities was working with residents to negotiate an agreement for Group I’s new tourist hotel at 950-974 Market to hire Tenderloin residents. Rio was so proficient negotiating with Group I that its principal, the extremely astute Joy Ou, offered him a job!

Rio and the tenants ultimately negotiated an historic jobs agreement for the Tenderloin. It includes paid training and ultimately union jobs paying a living wage. Once the terms were agreed upon our side needed to read the actual text to make sure it was consistent. That’s something either I would do or ask one of our THC attorneys to do, but in this case I felt Rio knew the agreement so well that he could do it.

When Rio is off on a stellar legal career I will recall how he showed his high skill level in negotiating, drafting and reviewing the 950 Market agreement. His subsequent application to law school then made perfect sense.

Rio loved working to enforce the city’s SRO anti-conversion law. He uncovered violations in hotels that we had not previously suspected of violating the law. Rio took particular joy in using the law to protect housing, another trait that should serve him well as an attorney.

Enforcing the SRO law in 2017 requires creativity. And Rio is creative. I cannot reveal some of the steps he took to uncover illegal tourist rentals except to say that as someone who has tried to uncover violations for decades, I was super impressed. I would say to my THC colleague Steve Collier, “can you believe what Rio did to find that violation”?

Thanks to Rio, we brought hundreds of residential SRO units back on the market. Rio also played an important role in building the citywide coalition to pass stricter HCO enforcement, which has already brought as many as 1000 units if not more back into the market.

I asked Rio this week about his early feelings about the Tenderloin. Raised in Santa Rosa and then going to UCLA and Santa Cruz, he had not experienced any neighborhood like the Tenderloin. He was immediately taken by “how alive are the streets. I’ve never been in a neighborhood where there is so much socializing on the sidewalk.”

While many attribute this pattern to people living in SRO units—with the sidewalk described as their “living room”—Rio also saw it as a function of poverty. “These residents do not have the money to buy a latte and socialize in a café so they talk to people where it is free.”

Coming from Bernal Heights, Scharf was surprised to see the ungentrified Tenderloin. He was also struck that “people in SRO’s with the least money spend the most on food because they lack kitchens and have to eat out all meals.”

What will Rio miss most? “The many residents I have worked with. It’s been special to work with so many residents deeply invested in the neighborhood. They really make time to fight, which makes it incredibly rewarding as an organizer.”

Rio identified the Tenderloin’s key asset: its people. It’s what drew me to the neighborhood when we started THC in 1980 and it’s what sustains people through today.

Tenants will also miss Rio. Tenderloin SRO resident David Elliot Lewis, who worked closely with Rio on the CCSROC Land Use Committee, said “I am grateful for all I’ve learned from Rio about community organizing and influencing city government to improve our community. I will miss him dearly.” Tenant leader Gail Seagraves echoed Lewis: “I have learned so much about land use because of Rio and his teaching skills. We will miss him.”

Some people enter law school with one set of values and leave with another. There is no chance of that happening with either Karin Drucker or Rio Scharf. Both will be people’s lawyers, helping the same populations as attorney as they did as organizers.

Rio’s CCSROC organizing job is still open. We cannot guarantee it leads to Harvard Law School, but if you think you want to eventually provide legal services to low-income people the position is great preparation.

Randy Shaw is Editor of Beyond Chron and Director of the Tenderloin Housing Clinic, which publishes it.