Saxophonist Vinny Golia and his Trio Comes to the CMC 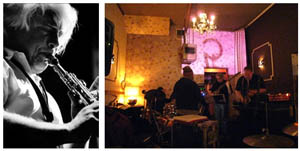 Plus Lords of the Outland

As a composer Vinny Golia fuses the rich heritage of Jazz, contemporary classical and world music into his own unique compositions. Also a bandleader, Golia has presented his music to concert audiences in Europe, Canada, Mexico, Japan, Australia, New Zealand and the United States in ensembles varying dramatically in size and instrumentation. Mr. Golia has won numerous awards as a composer, including grants from The National Endowment of the Arts, The Lila Wallace Commissioning Program, The California Arts Council, Meet the Composer,Clausen Foundation of the Arts, Funds for U.S. Artists and the American Composers Forum. In 1982 he created the on-going 50 piece Vinny Golia Large Ensemble to perform his compositions for chamber orchestra and jazz ensembles. The Saturday night, Golia and his trio, featuring Garth Powell on drums/percussion and Matthew Goodheart piano perform at the CMC on Capp Street, as well as the Lords of the Outland.

A multi-woodwind performer, Vinny’s recordings have been consistently picked by critics and readers of music journals for their yearly “ten best” lists. In 1990 he was the winner of the Jazz Times TDWR award for Bass Saxophone. In 1998 he ranked 1st in the Cadence Magazine Writers & Readers Poll and has continually placed in the Downbeat Critic’s Poll for Baritone & Soprano Saxophone. In 1999 Vinny won the LA Weekly’s Award for “Best Jazz Musician”. Jazziz Magazine has also named him as one of the 100 people who have influenced the course of Jazz in our Century. In 2006 The Jazz Journalists Association honored him with a Lifetime Achievement Award.

Golia has also contributed original compositions and scores to Ballet and Modern Dance works, video, theatrical productions, and film. As an educator Vinny has lectured on music & painting composition, improvisation, Jazz History, The History of Music in Film, CD & record manufacturing and self-production throughout the United States, Europe, Mexico, New Zealand and Canada. He currently teaches at California Institute of the Arts. In 1998 Golia was appointed Regent’s Lecturer at the University of California at San Diego. In 2009 Vinny Golia was appointed the first holder of the Michel Colombier Performer Composer Chair at Cal Arts.

For a percussionist/composer – time, rhythm, and pulse are undeniable, non-negotiable components of the craft. Yet, the sonic domain remains for many, a peripheral concern. Timbre is not only of equal importance; it is an integral part of the harmonic, melodic, and rhythmic construct. All four exist in the parallel sub-division of frequencies and waves. This relationship demands understanding, discipline, and mastery. In Garth Powell’s music, these elements are meticulously combined, creating a transcendent force enveloping the listener. Ultimately, we are drawn into the ecstatic, and the inexplicable.

As a veteran of the Trans-Bay-Area Improvised Music Community, Garth has performed or recorded with a sizeable number of the worlds preeminent artists within the field. He is just as much at home with classical orchestral and world percussion as the trap set. On stage, his large collection of percussion instruments (many of which Garth designed and/or adapted to his own needs) can be a visual treat by themselves. He also makes use of pre-recorded tape and electronically altered voice in performance.

Performing professionally since age 17, native San Franciscan Matthew Goodheart has gained an international reputation as an improviser, composer, and sound artist. His works have been performed throughout the US, Canada, and Europe, and have been featured at the International Spectral Music Festival, June in Buffalo, Klappsthulfest, and The Illuminations New Music & Arts Festival, among many others. He has been the recipient of the Nicola DiLorenzo Award, the A.H. Miller Prize in Composition, the New Langton Arts Award, and a William and Flora Hewlett Foundation Honorary Fellowship.

In addition to numerous solo CDs, he has recorded as part of Zen Widow, the Glenn Spearman Trio, the Marco Eneidi Creative Music Orchestra, and Gino Robair’s “I, Norton: An Opera in Realtime.” He has performed with such luminaries as Wadada Leo Smith, Fred Frith, Pauline Oliveros, Glenn Spearman, Gianni Gebbia, Vladimir Tarasov, and Jack Wright, and works frequently with the new music ensemble sfSoundGroup. He is the founder and curator of Evolving Door Music, and has lectured and taught internationally, including Mills College, Eastman School of Music, Cal Arts, the Music Conservatory of Coimbra in Portugal, and Istanbul Teknikal Univeristy. He is presently a candidate in advanced standing at the University of California at Berkeley, where he is pursuing a Ph.D. in music composition.

The Lords of the Outland

Created by Rent Romus in 1994, the Lords of Outland is a rotating collective of like-minded musicians focusing on modern jazz, free jazz, and sound art. Their albums range in a series of theme based productions from the music of Albert Ayler to sounds inspired by literary authors such as Edgar Allen Poe, Frank Herbert, H.P. Lovecraft and Phil K. Dick. In 1995 Romus submitted a video to the then fledgling BET Channel’s National Network Show “Jazz Central”. As the judges looking balefully into the camera visibly struggling with a rendition of Eric Dolphy’s “Out to Lunch”, Romus knew this was the direction to take.The group currently features CJ Borosque no-input pedals and trumpet, Philip Everett drums, percussion and electronics, and Ray Schaeffer electric basses, lead by Rent Romus on alto, soprano, C-melody saxophones, voice, and electronics. Other performing artists who have participated in the Lords of Outland include Jason Olain, Vytas Nagisetty, Andrew Borger, Bill Noertker, John Tchicai, David Mihaly, Toyoji Tomita, Joel Harrison, Tom Nunn, Doug Carroll, Andre Custodio, Jesse Quattro, Jonas Westergaard, and Vinny Golia.

Saxophonist Rent Romus is a force spanning over twenty years of D.I.Y. music production, performance, and curation. He is heavily involved in stretching past the confines of standard music forms performing his original compositions and improvisations in a wide variety of musical settings. From 1986 to present day Romus has recorded and released twenty two recordings as a leader featuring a cross section of new up and coming musicians as well as seasoned veterans of the improvised arts which have included Jason Olaine, Steve Rossi, Chico Freeman, John Tchiai, Jonas Müller, Stefan Pasborg, Ernesto Diaz-Infante, Thollem Mcdonas, and Tobias Fischer to name a few.

He is also focused in presenting and supporting the local experimental and avant-garde community at large with his grass-root philanthropic vision for total artistic self expression and freedom from generic branding through his label Edgetone Records and his curator work with Outsound Presents.

CJ Borosque is a well known bay area based improviser and noise and modern (and video) artist. Her art is a blending of genres pulling from abstract and avant-garde traditions. She is considered locally and internationally as a noiscian, and a visual artist whose home is in the underground music of San Francisco. She has preformed at the NorCal Noise fest on several occasions, The Big Sur Experimental Music Festival (2003/04), The Oakland Noise festival and twice at the Spring Reverb experimental music festival in San Diego. Most recently, she played Spring Reverb with the Band “Lords of Outland”.

CJ Borosque plays tumpet and analog FX boxes configured in a “no-input” design which allows for the creation of sonic feedback and feedback sounds without the use of a typical sound source… her noise projects are currently created using the electrical signal that is within her gear. She also sometimes plays other various electronics and Instruments: her fascinations include, art, cooking, sound, noise, sculpture (sonic and tactile), Installations, silent films, avant-garde films and videos, modern, impressionist and surrealist art, jazz, world and classical music.

Ray Schaeffer currently performs on fretless 6 string , fretted 4 and 8 string basses using a host of electronic effects that are incorporated to be part of the instrument. After studying music theory and upright bass in high school and junior college, Ray has performed in a diverse array of ensembles from full orchestra to folk rock bands, and experimental improv groups going back to the 70s.

Phillip Everett began music at the age of 9 on clarinet shortly there after moving on the drums when he was 13 where he began his studies in junior high school with Warren George from the Stan Kenton band. Warren believed in trial by fire and stuck Phillip in a room alone for an hour a day, told him to learn drum rudiments, and put him in advanced orchestra & marching band the following semester. That trial led him directly to Bartok, Debussy, and Gershwin as well as New Orleans style 2nd line marches. Furthering his studies he sought after George Marsh and Eddie Moore where he was taught the finer subtleties of the drums. Phillip states, “These guys taught me to relax and trust my own instincts and that pursuit of one’s own uniqueness was not a negative quality”