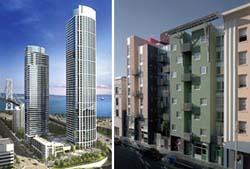 First in a Two-Part Series:

Since gentrification hit San Francisco in the late 1970’s, progressives have raised alarm over the city becoming a playground for the rich. The late 1990’s dot-com boom heightened this concern, and by the 2003 Mayor’s Race all of the leading candidates pledged to strengthen the city’s economic diversity. But while housing options for the rich and poor have greatly expanded in recent years, far too little has been done to protect the city’s endangered working and middle-class. It is almost as if city housing policy seeks to transform San Francisco into a city of only rich and poor. While thousands of new condos for the wealthy have been approved, Care Not Cash and other programs have created thousands of permanent housing units for formerly homeless, unemployed single adults. What happened to creating housing for the working and middle-class in this equation? What are the implications for a city when the groups that have traditionally formed the backbone of civic engagement are gone? San Francisco is becoming a city of the rich and subsidized poor; now we must have the political will to change direction.

In case anyone doubted the breadth of concern about San Francisco’s endangered working and middle-class, consider Mayor Newsom’s comments at an October 4 press conference about Care Not Cash. Apropos of nothing, the Mayor gleefully announced that San Francisco now had the lowest owner move-in eviction rate in over a decade, and experienced a sharp decline in Ellis Act evictions.

You read that right. A mayor who never expressed concern about any type of evictions during his seven years as a Supervisor, and who vetoed eviction protection measures during his first two years as Mayor, is now excitedly talking about reducing the type of evictions that target working and middle-class tenants.

And since the Mayor is a shoo-in for re-election, this was not an attempt to win tenant votes. In fact, the Mayor’s comments were “off message” in the Care Not Cash event, and were ignored by the media.

It is clear from the broad political consensus endorsing San Francisco’s economic diversity that the fears expressed by progressives beginning three decades ago were well warranted. But in 2007, it is not a decline in the city’s low-income population that threatens the city’s diversity, but rather the steady displacement of the working and middle-class.

In a nation of different priorities, there would be ample federal funding to ensure adequate housing for all of those in need. But we live in a country that has not had a President adequately fund affordable housing since Lyndon Johnson, and this has forced San Francisco and other cities to allocate scarce dollars among multiple deserving groups.

Why does San Francisco continue to prioritize housing for the rich and poor while elected officials pledge support for the working and middle-class? There are three main reasons.

First, housing for the rich is politically unstoppable in San Francisco, as evidenced by the glut of upscale condo projects routinely approved in recent years. Much of the new housing is unaffordable to the non-wealthy, and there is nothing that can politically be done to limit prices on San Francisco’s existing supply of single-family homes.

While San Francisco did not have to prioritize the development of housing for the rich, that battle has been lost. There are so many upscale projects in the pipeline that housing options for the wealthy would continue to expand even if a moratorium on new upscale projects were imposed tomorrow.

Second, contrary to the predictions of many, housing options for San Francisco’s poor have increased in recent years. This has occurred due to the strengthening of rent and eviction controls, and the protection of the city’s SRO housing stock.

But the chief reason low-income people remain in San Francisco is because voters have put tremendous pressure on the city’s mayors to solve, or at least reduce, homelessness. This has ultimately resulted in San Francisco creating more permanent housing for formerly homeless persons than any U.S. city on a per capita basis.

While the traditional media is more interested in covering panhandling and camping than the number of housing units created for the formerly homeless, the totals are staggering. In the past five years alone, San Francisco has created nearly 5000 units for a population that is overwhelmingly unemployed, impoverished, and disproportionately suffers from mental health and/or substance abuse problems.

Unfortunately, unlike the working and middle-class, this population has shown little interest in civic engagement. My organization, the Tenderloin Housing Clinic, is making an all out effort to get people out of their rooms and out into the broader community, and it is no easy task.

Advocates like myself have been so successful at convincing policymakers to provide permanent housing for the formerly homeless that the lion’s share of city housing resources have gone to combating homelessness. And, given our obscenely limited housing pie, this has necessarily resulted in less money to retain San Francisco’s working and middle-classes.

We saw this at the Plaza Apartments at Sixth and Howard. A project sold to the community as housing for working people was transformed after construction into housing for formerly homeless persons with health and/or mental disabilities.

I am not suggesting San Francisco should have done less to address homelessness. But one cannot understand why San Francisco continues to become a city of rich and poor without recognizing how homelessness has driven city housing funding.

Third, San Francisco has prioritized housing for the poor over even the working class in recent years because many progressives seem unaware of just how many units, and how much money, has been allocated to extremely low-income housing in recent years. After fighting for years to get the poor their fair share, many seem unaware that San Francisco has allocated far more money for units for the very poor than for working families and other deserving groups.

I recall during the Brown Administration a campaign by a senior organization to demand that a certain percentage of city money go to seniors. The campaign fizzled when it was revealed that seniors actually got more than their demographic share of the population, as there were far more available federal and state funds for senior housing than for families with children.

I question whether San Francisco’s housing policy should be to maximize the number of very poor residents, even if it means that we lose the working and middle-class. But this topic has never been subject to a public debate, as elected officials do not want to act like they are “choosing” who lives in San Francisco, particularly when it could appear that they are voting to “kick” the poor out of the city.

But funding decisions represent such a choice. A question worth debating is why, given the limited resources, it is better for San Francisco to continue to create housing options for the very poor while doing comparatively little to retain San Francisco’s working-class.

Or perhaps our premise of limited resources can be changed. Supervisor Chris Daly has proposed a charter amendment to do precisely that, and this will be discussed tomorrow along with other strategies for helping the working and middle-class stay in San Francisco.