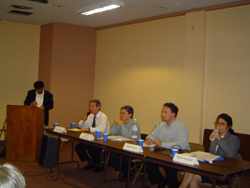 At last night’s Health Services Network D9 candidate debate, everyone looked tired. It could have been the sallow yellow walls in the Centro del Pueblo auditorium. It could be that, after months of campaigning, candidates are ready to wrap this election season up and move onto the next challenge. Or maybe candidates, audience members and this reporter alike were suffering a collective case of the Mondays. Neither as dramatic as the D5 debate nor as contentious as D1’s, the final HSN event confirmed what most of us already knew: that this race is between incumbent Tom Ammiano and Renee Saucedo.

Before I get to why Ammiano and Saucedo emerged as this debate’s clear winners, let’s first discuss Bermudez and Bustos. I know, it’s a departure from the top-down pyramid scheme journalists are supposed to espouse. But I want to make it clear why I’m putting Ammiano and Saucedo ahead. Besides, if I saved my criticisms for the second half of the article, the majority of readers wouldn’t even read them. As negative as it sounds, the reasons not to vote for someone are often as important as the reasons for supporting a particular candidate.

Despite his childhood in D9 and his former position as a White House policy analyst, Miguel Bustos seemed completely unable to address his neighborhood’s issues. Yes, he answered the questions. Yes, he called for more non-profit funding, helping youth and trimming the proverbial fat. But after many of his comments, all I could think was, “Duh.” I even wrote, “No Shit, Sherlock,” in my notebook several times. Hey, you have to entertain yourself during these things.

Describing his plans to raise revenue for Health and Human Services, Bustos replied, “I would propose that we protect them,” meaning the non-profits. But no suggestion for how to accomplish this followed. Another question asked candidates to explain which programs they would cut and which they would support when facing a budget deficit like the one the city currently faces. Bustos explained that he would not cut housing, health services or education. That’s sort of like saying you stand for world peace. It’s a nice thought, but it doesn’t mean very much without some concrete ideas.

When he talked about cleaning up the Mission’s notoriously grody streets, he was careful to mention, “and that’s something I did not make up.” It’s funny, because, for a minute there, I was going to give Bustos credit for having a radical idea. Who would have thunk it? The Mission needing cleaner streets? You don’t say.

My snarky comments aside, Bustos is obviously a capable person who cares about his neighborhood. But his political skills have a long way to go before they will stand up to intense public scrutiny.

As for Bermudez, she’s pushing an agenda closer to socialism than pragmatism. If she had her way, the city would leave decision-making to community councils, and San Francisco’s money would sit in a Municipal Bank instead of Bank of America. She would also leave juvenile justice up to communities instead of the courts.

The philosophical currents underneath her political stance and her occasional sharp wit make me think Bermudez is too smart to think she’s got a snowball’s chance in hell of winning this race. While I’m not sure she or her supporters would agree, her campaign appears to be more about giving a voice to undocumented immigrants and disenfranchised people than actually securing a voice in City Hall. The political center needs those radicals calling for a revolution from the sidelines. Without them, many of us would never even hear about forgotten populations’ problems.

After listening to Bermudez through the forum’s duration, I concluded that her energy and willingness to eschew convention for radicalism would be better suited to setting up those community councils she spoke about instead of serving on the Board. If she were stuck on the Board of Supervisors, she’d probably be miserable amid the political tedium the job requires.

And now we come to Ammiano and Saucedo. If you’re still reading, I just want to say thank you. I appreciate it. In many ways, the leading candidates in the D9 race are a lot alike. They are both experienced, intelligent leaders who have proven records handling positions in the public eye. Ammiano has10 years under his belt as a supervisor and key figure in local politics. For 15 years, Saucedo has worked on progressive causes, both as a lawyer and as an activist. In my mind, there’s no question that both candidates would make positive contributions to the Board.

As one would expect from a veteran supervisor, Ammiano obviously possesses a keen understanding of local issues and how to approach change in City Hall. While Bustos and Saucedo advocated cuts to city employees’ perks like cell phones, Ammiano dismissed the idea.

“It’s sweet that people come up with little nickel and dime things,” but he’d been around long enough to know that cutting out the small things would do little to combat the budget deficit, he told the audience.

Instead, Ammiano reminded the audience of the Rainy Day Fund, which he put on the ballot last year, and suggested the city take over broadband and cable services in the coming years.

Saucedo supports many of the same causes as Ammiano, her talking points at last night’s forum put a heavy emphasis on aiding the Latino and Hispanic community, unionizing non-profits, helping the homeless and rescuing D9’s troubled youth population.

Saucedo was the only candidate to repeatedly call for the removal of finger printing requirements at homeless shelters, enacting cuts to fire department staff, creating incentives for light industrial companies to set up shop in D9 and levying a transit tax on downtown businesses that benefit from Muni and BART. And though she used the hackneyed plea against “balancing the budget on the backs of the city’s most vulnerable,” she did so in reference to an idea that no other candidate mentioned: squeezing PG&E’s fat coffers.

While neither candidate wants this election to be about race, Saucedo’s dedication to D9’s Latino and Hispanic community is a significant part of her platform. Ammiano does include Latino and Hispanic community issues in his agenda, but his talking points were directed at a broader audience than Saucedo’s. In addition to her Green Party issues, Saucedo advocates giving non-citizen residents the right to vote in district elections and increasing efforts toward cultural and language sensitivity in non-profits.

Even though he was speaking in a non-profit that primarily serves the Latino community, it’s to Ammiano’s credit that he stuck to his broad platform. It’s also ironic that Ammiano, a key figure behind the creation of city district elections, is now a candidate who would benefit from a citywide vote, while Saucedo would likely face a more difficult race were she not running in a neighborhood where she already has substantial professional and personal history.

Saucedo’s appeal to the Latino and Hispanic community make her a strong contender in D9, but her appeal to that portion of her district’s residents may not get her the votes she needs to win. After all, many of the residents who stand to benefit from her platform are unlikely or unable to vote next week. Her performance at last night’s debate was certainly convincing and enthusiastic, but she may end up pigeonholed as the Latino community’s candidate instead of a leader for all of D9. If Ammiano succeeds in winning this race, this term will be his last, and Saucedo will have already positioned herself as a viable candidate and likely successor.

You can reach Lorraine at lorraine@lorrainesanders.com.