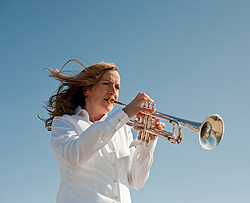 In the past few years, Wilson’s original work has premiered internationally and nationally at highly acclaimed venues such as the Willisau Jazz Festival, Switzerland, NYC Central Park’s Summerstage, the deYoung Museum in SF, the Healdsburg Jazz Festival and the Festival of New Trumpet Music in NYC. Wilson’s new record label, Brass Tonic Records celebrates the release of her 2010 CD, Trapeze Project with Wilson (trumpet/vocals), Myra Melford (piano), Ben Goldberg (clarinet), Jerome Harris (bass) and Scott Amendola (drums). Fresh from over a decade-long stint in NYC as an active fixture in the downtown jazz world, Wilson exploded back on her native SF Bay Area music scene winning critical acclaim for her 2006 CD, Music for an Imaginary Play. The CD garnered a Best in 2006 Bay Area Jazz CDs highlight from the music critic Andrew Gilbert. Her music has also received esteemed national accolades from the New York Times, Time Out New York, San Francisco Chronicle and Cadence Magazine.

In 2009, Wilson was awarded three composing commissions from the Zellerbach Family Foundation and William and Flora Hewlett Foundation, East Bay Fund for Artists, deYoung Museum Cultural Encounters Initiative in collaboration with Intersection for the Arts. Meet the Composer’s MetLife Creative Connections program has also funded her work. Wilson also wrote a commission for Kenny Wollesen as part of a 2008 Massachusetts Museum of Contemporary Art residency.

Wilson’s music has evolved through a diverse experience with jazz, theater, film, animation, performance art and traditional music studies. In the early 90’s, she served as Musical Director for Bread and Puppet Theater in VT with extensive international touring, collaborated for six years with Lincoln Center for the Arts writing music for annual puppet theater productions funded by Meet the Composer, and scored a film in the “Body Art” exhibit at the American Museum of Natural History in NYC.

Raised in Healdsburg, CA, Wilson received a BA in Anthropology from the University of California at Berkeley. Through a private mentorship with Schoenberg scholar Paul Caputo, she obtained a BA in music from Empire State College, NY. Wilson has studied extensively with trumpeters John McNeil and Laurie Frink. Wilson has also received funding from the McCord Foundation, Irene Diamond Foundation and was a 2010 Djerassi Resident Artist.

Wilson’s latest features some truly great musicians, including one of my personal favorites, local drummer Scott Amendola. The gorgeous tones of Goldberg’s clarinet paired with Harris’ bass and Melford’s piano is a delight. Wilson also brings out some of her best writing and vocal performances on this CD. There is a softness about this album, but don’t be fooled by it. Wilson swings with the best of them and her trumpet playing is both delicate and brassy. “Himalayas” is one of my favorites; thoughtful, energetic and indicative of Wilson’s talent and the wonderful flavor of this entire album. There have been some great jazz albums by Bay Area women this year, Wilson’s “Trapeze Project” must be counted among them.

E. “Doc” Smith is a musician and recording artist with Edgetone Records, who has worked with the likes of Brian Eno, Madonna, Warren Zevon and Mickey Hart among others. He is also the inventor of the musical instrument, the Drummstick. He can be reached via http://edgetonerecords.com/edoctorsmith.html