Santorum Nomination Would Be Biggest Surprise Since Willkie in 1940 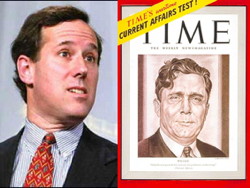 The Republican Party may soon make history. If Rick Santorum rides his current upsurge to the nomination – a lock if Newt Gingrich soon leaves the race – it will be the biggest political upset since Wendell Willkie entered the 1940 GOP Convention as a non-candidate and left as its presidential nominee. Not since Willkie has a candidate from either party won the presidential nomination after not being among the front-runners after primaries began. And not since Santorum’s challenge to Mitt Romney is playing out exactly as many of us thought would occur when Rick Perry entered the race; the GOP base has spoken, and Santorum is their guy. The magnitude of what the conservative base has achieved both in the 2010 elections and with Santorum’s rise is stunning.

It’s hard to calculate the exact moment when the Republican base decided Mitt Romney was an unacceptable presidential nominee, but after Rick Santorum swept Minnesota, Colorado and Missouri this message was heard loud and clear. Only Newt Gingrich’s declining candidacy is keeping Santorum from an all-out rout of the longtime front-runner. And given the former Speaker’s animosity toward Romney, he could leave the race sooner rather than later.

It never made sense for the GOP base to accept Romney after swallowing John McCain in 2008. And it turns out it probably won’t accept the serial flip-flopper who thinks nothing of $10,000 wagers and Cayman Island bank accounts.

The last time a presidential nomination contest saw such a dramatic reversal after it was well underway occurred in 1940. Senators Robert Taft of Ohio and Arthur Vandenberg of Michigan joined New York City District Attorney Thomas E. Dewey in a feverish race that left 700 of the 1,000 convention delegates uncommitted when the GOP convention began.

Wendell Willkie had never run for office, but backed by media titans he seized the presidential nomination. It was exactly the type of “brokered” convention that Sarah Palin has been encouraging for 2012, a clear message from the Tea Party favorite that Romney is unacceptable.

What many find remarkable about Rick Santorum’s rise is that he is far, far, far to the right of anyone who has ever been a major party presidential candidate. But the hard conservative base showed in 2010 that it could take back the House of Representatives, and now are flexing their political muscles to get one of their own as the Republican presidential nominee.

Tea Partiers like nothing more than to challenge what they perceive as “the Establishment,” which Mitt Romney embodies. And since national polls show little difference between Santorum and Romney against President Obama, hard-core conservatives are going with the candidate they most want.

Democrats were happiest this year when it looked like Gingrich could win the nomination. While there is growing confidence that Obama will defeat any Republican, Democrats saw Newt as an anchor around Republicans running everywhere outside the South.

But Newt’s fall was a fast as his rise. While he still talks of a third revival of his momentum, he is done.

Until Santorum’s surprising surge, Democrats faced a likely presidential win over Romney, but little guarantee of taking back the House and keeping the Senate. Santorum’s nomination puts every Republican race outside the South back into play.

Santorum lacks such personal problems. But he’s got enough “baggage” in his past to fill an airline terminal.

That’s why Democrats are responding to Santorum’s rise in the same manner as Tea Party activists: with unrestrained glee.