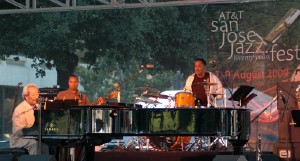 If you’re broke this weekend and can’t afford the $75 a day ticket for the Outside Lands festival in Golden Gate Park, check out the San Jose Jazz festival that kicks off tonight with George Clinton and Parliament and Funkadelic and wraps up Sunday with Tower of Power. With tickets going for $15 a day, the three day festival celebrating its 21st year is one of the best bargains on the concert scene. In addition to George Clinton and Tower of Power, this year’s festival features singer Nnenna Freelon, Maceo Parker, John Handy and a thousand other Jazz, Blues, Latin, Salsa and Funk artists performing on ten stages, 14 bars and lounges in downtown San Jose tonight, tomorrow and Sunday.

The economic downturn hit the non-profit San Jose Jazz Society that produces the festival in 2006 when a reduction in sponsorship, grants and donations forced festival organizers to charge a $5 dollar fee, still a major bargain compared to ticket prices that are much more expensive for similar festivals such as JazzFest in New Orleans. The combination of a worsening economy and a loss of sponsors put the future of the festival in question, since festival organizers did not know until the very last minute whether sponsors would be willing to support the festival.

In addition to funding challenges that have forced the cancellation of festivals like the San Francisco Blues Festival, the North Beach Jazz Festival and the recently cancelled Healdsburg Jazz Festival, media consolidation has reduced press coverage of the festival, with many of the writers who in past years wrote articles and reviews about the festival no longer working with papers in San Francisco. In the post media consolidation world, promotion of concerts and festivals are often tied to advertising and promotional packages.

The weather forecast this weekend for Golden Gate Park calls for more of the chilly grey fog and clouds that has been hanging around San Francisco for the last month. If you already have a ticket for Outside Lands, or can afford the $150 two day ticket to see Al Green, Nas, Damian Marley, Phil Lesh and the other folks at Outside Lands, bring your parka and have a good time. If you’re singing the recession Blues and want to see a little sun this weekend, jump in the car or catch the train to the San Jose Jazz Festival. The ticket price, gas or train ticket for both Saturday and Sunday shows at the San Jose Jazz Festival will be less than a one day ticket at Outside Lands.

San Jose Jazz Festival – The festival is in Downtown San Jose, four blocks away from the San Jose Diridon Caltrain/Amtrak station. In addition to hourly weekend Caltrain service from San Francisco, Amtrak runs 32 Capitol Corridor trains between Sacramento and San Jose. The ACE train, which usually runs on weekdays from Stockton to San Jose will run special trains to the Festival. For more information, go to jazzfest.sanjosejazz.org