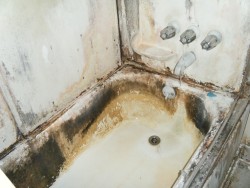 Several weeks ago, when a colleague showed me the Department of Building Inspection’s recent 30-page Notice of Violation for the Stanford Hotel (viewable in two parts here), I was skeptical of his claims that it was the “worst SRO” in San Francisco. Just because DBI had done a thorough room-by-room inspection did not make it the worst in the City. And when I did code enforcement work for the Tenderloin Housing Clinic several years ago, I would occasionally visit the Stanford Hotel at 250 Kearny – which was a little outside our service area. I remembered it as a bad, but a lot of SRO’s on 6th Street or in the Tenderloin were worse. But when I returned last Friday, I was horrified – and conversations I had with several long-term tenants confirmed to me that conditions have deteriorated in recent years. If you want to see the worst SRO in San Francisco, don’t go to the Tenderloin – just go to the Stanford Hotel on Kearny Street.

Based on its neighborhood and location, you would never guess that the 200 block of Kearny – sandwiched between Chinatown and the Financial District – has an SRO, let alone the worst in San Francisco. But having read the Notice of Violation, I met Tina Cheung of Chinatown Community Development Center outside the building on Friday afternoon, who had been working with tenants there following an anonymous complaint.

We had a tenant let us into the building – not that it was really necessary. The front door was unlocked, as we walked through a cavernous and cold hallway. “This can’t be safe for tenants,” I muttered. “I’m sure you get drug-dealers and prostitutes sneaking in.”

“We’d rather it not be locked,” replied the tenant. Otherwise, she explained, tenants get locked out – because the desk clerk upstairs is fast asleep, and so won’t buzz them in.

Even before going upstairs, it became immediately apparent the landlords didn’t follow the City’s Mailbox Ordinance, which requires every residential hotel owner to install individual mailboxes for each tenant in the common areas. On the ground floor near the entrance was a large box with the sign “mail” – for the desk clerk to apparently sort out later.

As we walked by, we saw the inoperative elevator – which hasn’t been working in “eight or nine years,” according to most tenants. The few tenants who live here (including the woman who was with us), live on the fourth or fifth floor – and have to climb very steep flights of stairs. “I fell down the other day,” our tour guide said rather non-chalantly.

Most of the building is empty – because the landlords applied for a seismic retrofit permit years ago, and presumably told the tenants they had to move out temporarily. Then, they never finished the seismic work – and the permit expired. All of this was documented in a 2009 lawsuit by the City Attorney – where the landlords had to pay over $127,000.

In fact, it’s quite shocking when you read the lawsuit – where the landlords were required by a court order to comply with building and housing codes – to look at the Hotel today.

Cheung took me up to the 4th floor, to show me the public “bathroom.” The above photo is of the bathtub, where tenants are expected to bathe in a pile of filth. The building has a slightly nicer bathroom on the 5th floor, and management left a note warning the tenants not to pour grease from their cookery into the tub. “You know who you are,” he wrote.

Our tour guide took us into her room, where she at least has her private bathroom – but the toilet does not work. “The mice like to crawl under the bed,” she said pointing to her ancient mattress and box spring. “The bedbugs too – they all must have a relationship.”

Rents at the Stanford Hotel range from $380 to $550 per month – and it’s obvious just by looking at the Notice of Violation that tenants could file a “Decrease in Services” petition at the Rent Board. I brought this to the attention of a few of them, but there was quite a bit of resistance – more than what I’ve seen at many SRO hotels I’ve done organizing in.

“Tenants assume they have it good here, because they don’t live in the Tenderloin,” said Cheung. And with the building largely empty, you don’t have as much traffic here.

But talk to the long-term tenants, and you’ll see conditions used to be a lot better. “When I moved in, everything was painted and the carpets were steam clean,” said George – a 19-year tenant. “Now, they only fix things if they feel like it – to them, we’re all just a bunch of bums. Tenants stopped complaining because they’ve had enough of deaf ears.”

But if the recent Notice of Violation – coupled with the court injunction and the prior lawsuit – is any indication, the worst SRO in San Francisco may start seeing changes.