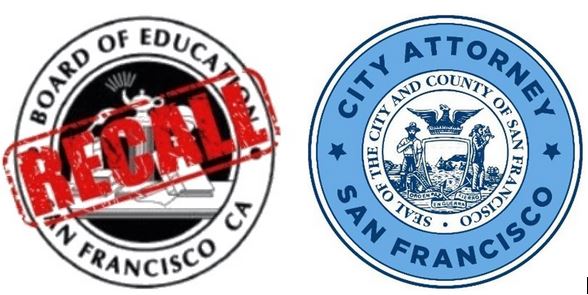 Fierce Contests Potentially Ahead for City Attorney, School Board

Those hoping for an off-year election break got some bad news last week: the Governor’s recall will be on the November 2021 ballot and San Francisco could see three heavily contested local races. The voters from “Trump’s California” whose signatures qualified the recall have set off expensive state and local elections that California’s transition from the pandemic can ill afford; one  more reason to savor the recall’s crushing defeat.

San Francisco potentially faces two hot button local campaigns in November. Considering opposition to the Newsom recall will likely exceed 80%, it is local campaigns that could have residents getting angry with each other.

Mayor Breed’s appointment of Dennis Herrera to head the SFPUC opens up a prime political position that has been unavailable for twenty years. David Campos, former D9 Supervisor and newly elected male Vice-Chair of the California Democratic Party, is said to have long desired the job (Campos previously worked in the City Attorney’s office). But Breed is not expected to appoint Campos. If she does not, San Francisco will have the latest chapter in the long running political saga of a mayoral appointee facing a challenger aligned with the city’s progressives.

Under Dennis Herrera,  the City Attorney’s office has championed tenant protections and the preservation of rental housing. Herrera even went to the mat for SRO tenants denied mail service, despite knowing the city faced an uphill legal battle. San Francisco needs a City Attorney who will continue prioritizing tenants rights. I’ve dealt with City Attorneys’ that do not make this a priority and San Francisco in 2021 cannot allow this.

Prior to Louis Renne and Herrera, San Francisco City Attorneys’ rose from the ranks. There wasn’t a big political push for the job. A high ranking and popular deputy could turn support from a large number of his colleagues into winning the job.

I vividly remember Election Day when Herrera faced Jim Lazarus in the December 2001 City Attorney runoff. Lazarus finished over 16,000 votes ahead of Herrera in November and was heavily favored to win in December. I was furious with myself for not doing more to elect Herrera, who I thought would lose a very low turnout runoff.

Roughly 75,000 fewer votes were cast in the race. But thanks to the election targeting genius of Robert Barnes, Herrera did a better job of getting his vote out and won by around 3000 votes (Barnes, a larger than life figure who died tragically in 2002 at only 42, played a critical role in the city’s LGBTQ history. Herrera would never have become City Attorney without him).

I don’t know who Mayor Breed will appoint. But if it’s not David Campos expect another election between the city’s “progressive” and “moderate” wings. Dean Preston and Chesa Boudin won the most recent duels against mayoral appointees; “moderates” have not prevailed since Mayor Breed’s win in 2018.

The campaign to recall three School Board members (the only ones subject to recall) could also end up on the November ballot. And if the recall of Alison Collins is included, expect fire breathing messaging on both sides.

I checked with Joel Engardio, who has been active in the recall effort, on its potential to qualify for November. “Based on the signatures they’ve gathered the past couple weeks it’s possible they will get enough to qualify if they keep up the same rate of signature gathering, ” he told me. But he cautions, “The odds would be better if they can increase the rate. Getting more than 52,000 valid signatures times three commissioners is really hard — especially if the board starts behaving when they see the momentum behind a recall threat.”

I led a successful effort in 1994 to get 60,000 valid signatures for a San Francisco ballot measure and know how hard it is—and we didn’t have to deal with a pandemic. Securing 52,000 in this environment is a steep challenge.

Since the recall campaign was launched the School Board has reversed its decision to rename 44 schools. The Board also stripped Alison Collins of her position as Vice-President, and left the controversial member isolated on the Board. Both actions could reduce the pace of signatures.

Including the School Board recall on the November ballot would boost citywide turnout. Collins’ past public statements would make it a no holds barred campaign.

The Newsom recall election enables the Board of Supervisors to add local ballot measures. How about San Francisco taking the national lead in allowing digital and remote participation for government hearings to continue permanently?

Assembly members Alex Lee and Christine Garcia are sponsoring AB 339 to accomplish this statewide. But the bill was weakened in committee last week and its prospects remain unclear. Regardless of what happens with AB 339 San Francisco should use the November election to go on record for expanding democracy by opening public meetings to those who are unable to personally attend.

Generation Priced Out describes how cities often make land use decisions in afternoon meetings held when working people, people with disabilities, and those in school cannot attend. These meetings disproportionately include older homeowners while excluding tenants. Zoom meetings during the pandemic have opened up these and other public hearings for the first time. Why would we go back to restricting the democratic process by again requiring in-person attendance?