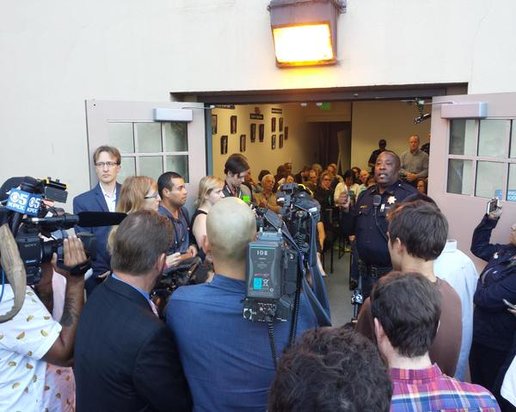 It will come as a surprise to those who believe San Francisco has lost its soul and is at the mercy of big money, but the past year has seen a sharp rise in effective grassroots activism. From battling Ellis evictions and promoting affordable housing to this week’s turnout of over 100 bike activists to an SFPD Park Station hearing on stop sign enforcement, San Francisco activism is on the rise.

How can activism be increasing if, as many claim, the city is now dominated by young techies whose lives are spent in front of computers? And if the Mission has been completely gentrified and “hollowed,” where did these tenant activists come from?

The answer, of course, is that the “death” of the economically diverse Mission and of San Francisco’s progressive policies has been greatly exaggerated.

The battle to “save” San Francisco as a place for people of all income levels has not been lost. To the contrary, in many ways the city is doing more today than ever before to preserve this diversity. This has become a challenging task with single family home and condo prices completely unregulated, along with rents on vacant apartments.

I think some promote doom and gloom scenarios because they believe it spurs activism. But many potential activists find such talk deflating. People don’t get involved if they feel they can’t make a difference.

Embodying increased activism in San Francisco is the SF Bike Coalition. The SFBC has been around for forty years. During much of that time trying to get San Francisco to even add bike lanes in Golden Gate Park was a major struggle. Merchant opposition long slowed bike lanes on Valencia Street, and attempts to make Market Street more bicycle friendly had little support at City Hall.

It wasn’t due to a lack of leadership or vision on the SFBC’s part. Dave Snyder had a vision for a grassroots bike movement when he took a dormant SFBC in 1996 and set it on a course focused on activism. His successor, Leah Shahum, then helped build the organization to over 10,000 members and 17 staff. Shahum also recognized that bicyclists grassroots power would prove the key to their success in San Francisco.

Today, bike activists, often joined by pedestrian safety advocates in Walk SF, are mobilizing as never before. Using its own social media and that of supportive websites like Streetsblog SF, the SFBC is constantly turning bike riders into bike activists.

The huge August 11 evening turnout to protest the SFPD’s excessive crackdown on bicyclists commuting to work on the “Wiggle” at Steiner and Waller is a case in point. This turnout occurred during a peak vacation weak and on the same day that the new Safer Market Street prohibitions on private cars took effect, another triumph of the SF Bike Coalition’s successful activism.

The banning of private cars from lower Market Street is truly transformative. And if anyone thinks this would have happened without ongoing organizing and activism by the SF Bike Coalition, they don’t know the long history of bureaucratic opposition to this proposal.

SFMTA head Ed Reiskin wanted to make this move, but had to be able to tell his engineers that the public demanded it. SFBC activism gave Reiskin this necessary public support base. And while some activists constantly criticize Mayor Ed Lee’s record on bike and transit issues, this is another example of the mayor responding positively to grassroots activism, in this case the public clamor for a car-free Market Street.

I don’t have the numbers to say that there is more housing activism in the Mission today than during the dot-com boom of the late 1990’s, but there certainly does not appear to be less. And there is unquestionably more and larger grassroots eviction protests citywide than in the past (which the late Ted Gullicksen would have loved).

These Mission and Ellis Act protests citywide are as demographically diverse as ever before. And when you add the overflow crowds coming to tenant bootcamps, it shows that  people are eager to fight for the city’s economic diversity and that the struggle has not been lost.

That last point is often lost amidst books and articles claiming the “inevitably” of gentrification and displacement. I describe in my book about the Tenderloin how that neighborhood avoided this fate, and how other communities can do so as well.

But avoiding tenant displacement requires mobilizing to win the land use protections necessary to protect economic diversity. Regardless of the outcome of the Mission moratorium ballot measure (Prop I), the grassroots campaign highlighting the neighborhood’s crisis has already secured a 100% affordable project at 490 South Van Ness (at 16th), the nonprofit purchase of multiple Mission sites where tenants faced Ellis Act evictions (through Mayor Lee’s Small Sites Acquisition Program), and a $50 million share of the $310 million affordable housing bond.

San Francisco residents are wealthier than ever before and the city’s affordability challenges are steep. But grassroots activism is rising, and past history says not to bet against it.

Randy Shaw is Editor of Beyond Chron. He discusses how the Tenderloin avoided gentrification in his new book, The Tenderloin: Sex, Crime and Resistance in the Heart of San Francisco,