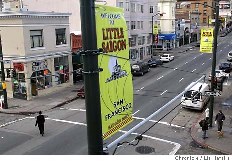 After San Francisco’s District 6 gained 26,000 new residents in the 2010 census, the city was legally required to reduce its boundaries so as to match the population of adjacent districts. But District 6’s sharp population increase did not cause a parallel increase in police staffing. In fact, staffing did not increase even though D6’s residential growth was accompanied by commercial developments bringing many more people into the district. In areas like the Tenderloin, the boundaries for San Francisco’s police districts appear almost random. While Larkin Street, the heart of Little Saigon, is not in the Tenderloin police district, downtown Grant Avenue and the Macy’s on O’Farrell are. This skewed police districting makes it harder for local businesses and residents to report crime, and to develop relationships with local police. But despite these problems, the SFPC plans no changes until the new Public Safety Building housing Southern Station is completed at Mission Bay in the fall of 2014.

On June 26, a large contingent of Tenderloin merchants attended a forum hosted by D6 Supervisor Jane Kim and Tenderloin Police Captain Jason Cherniss. A number ran businesses on Larkin Street, and expressed concerns about drug dealing and other crimes around Larkin at both O’Farrell and Eddy.

Larkin Street is policed by Northern Station, whose office is at Fillmore and Eddy. Instead of being able to walk two blocks to the Tenderloin station to lodge a complaint, a small business owner was told they had to go into another entire neighborhood to do so.

Considering that Little Saigon is a critical part of the city’s Invest in Neighborhoods program, the requirement that its businesses deal with a police station outside the Tenderloin makes even less sense.

A day following Supervisor Kim’s meeting I asked Chief Suhr when he visited Lower Turk why he could not expand the Tenderloin station to Larkin on an interim basis. Considering that Grant Ave has never been appropriately in the Tenderloin station, moving the station’s boundaries one block west seemed like an easy solution to the problem.

The Chief, however, disagreed. He said that such isolated changes would throw the whole system off.

But District 6’s population increase has already thrown the system off. And the same illogic that puts Little Saigon in the Northern Police District also prevents Captain Cherniss and his forces from taking the lead in improving the Mid-Market portion of Central Market bordering the Tenderloin. Rather than be served by the nearby Tenderloin station, the crucial stretch of Market Street between 5th and 8th Streets is served by Southern Station housed at 850 Bryant.

SFPD brass from Chief Suhr on down agrees that the new boundaries in 2014 should put this stretch of Market as well as at least the first block of Sixth Street into the Tenderloin station, and that Larkin Street should be placed there as well. But instead of implementing any changes at this critical time in this area’s revival, sound crime strategy is being subordinated to the construction schedule of the new Public Safety Building in Mission Bay.

A transformed Mid-Market demands police boundaries that reflect its changes. Those investing in both Mid-Market and the Tenderloin deserve a nearby police station and a single captain who they can work with in reducing crime. After all, a small business owner at Eddy and Larkin does not have time to go down to Fillmore Street to lodge a complaint, and should not have to do so.

The SFPD’s current boundaries also undermine its core community policing strategy by disconnecting small businesses and residents from the police station closest to them. I understand that interim changes means extra work, but the city routinely passes interim land use measures to achieve important goals while awaiting the enactment of final plans.

Imposing interim police boundary changes to boost the Central Market and Tenderloin should be no exception to this longstanding city practice.

Randy Shaw is Editor of BeyondChron