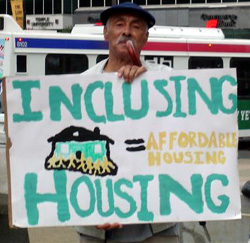 San Francisco’s inclusionary housing law is not working as designed. And something needs to be done about it.

In my upcoming book, Generation Priced Out: Who Gets to Live in the New Urban America? coming out this fall from the University of California Press, I argue that inclusionary housing is vital for cities to maintain and expand economic diversity. 100% affordable projects are rarely built in high-opportunity urban neighborhoods. For the working and middle-class to have the ability to live in such communities, inclusionary housing is the chief if not the sole strategy.

San Francisco has over 3000 affordable inclusionary units. Inclusionary housing does not alone “solve” the city’s affordability crisis, but it helps.

San Francisco’s inclusionary law has become a mess because some of the same supervisors who passed the current law are circumventing the terms of the deal. They are doing so by privately requiring developers to contribute more than the law requires.

I’m not talking about cases like the massive 5M project at Fifth and Mission where the developer got the benefit of major upzoning. I’m talking about garden variety projects consistent with existing zoning where the supervisor backs activists seeking greater contributions than legally required.

These extra-legal shakedowns are particularly troubling as rising construction costs jeopardize pending and new housing developments.  A recent report from the Terner Center at UC Berkeley found San Francisco has the second highest construction costs nationally, and that “those costs are rising quickly,” They rose 12.6% from 2011-2016 alone.

The political debate around inclusionary housing has ignored rising costs.  After the San Francisco Controller recommended  rental inclusionary rates of 14 to 18 percent and ownership at 17 to 20 percent, the Board of Supervisors raised the totals to 18-20%.  The Board also increased the rate by 1 percent on January 1, 2018 and January 1, 2019, and then by 0.5 percent per year.

The Supervisors also imposed a higher 24-26 percent on-site requirement for new housing in the Mission, Tenderloin and the 6th Street/Folsom corridor. This appears to have been done without any public input. I am not aware of a single announced community meeting to discuss whether Tenderloin residents supported the higher inclusionary percentage. I read about it after passage. I did not object at the time because the larger deal had been cut and virtually every buildable site in the Tenderloin is already approved or in the pipeline.

Many developers and activists who were skeptical about the high inclusionary mandates in the 2017 law felt it was worth it to ensure certainty and predictability. Builders need to know what their inclusionary costs will be in assessing whether their projects are viable; the worst problem is when the Board was adding on new requirements once significant time and expense had been invested in the project.

But San Francisco’s new inclusionary law did not give builders the predictability that was part of the legislative compromise. Instead, after passing the nation’s steepest inclusionary laws some of the supervisors who voted for it felt free to continue making their own deals.

Today, some supervisors do not hesitate to tell developers they need to pay more than the law requires. Supervisor use their ability to secure continuances at the Planning Commission—or at the Board of Supervisors if the project is appealed—as leverage.

The projects subject to this shakedown are pipeline developments that the supervisors grandfathered in at lower rates. That was a key term in the grand deal that resulted in the current law. Yet now we have activists (backed by supervisors) insisting that such grandfathered rates are insufficient.

Instead of the statutory inclusionary percentage acting as the ceiling for developers’ financial contributions, it has become the floor. This not only puts projects at risk, but it surely leads builders to think twice about again moving forward with a project in San Francisco.

A city with an acute housing shortage takes such actions at its peril.

Among the leading reasons Seattle annually builds double the housing of San Francisco  is that it excludes elected officials from the approval process. Housing in Seattle largely moves forward as of right, with Councilmembers unable to build patronage machines out of extracting extra concessions from developers in exchange for not holding up projects.

Nor does Seattle have a Planning Commission whose members can seek additional extractions beyond what the law requires. By taking the politics out of project approvals for housing consistent with zoning, Seattle avoids the appearance of insider dealing and corruption.

Most importantly, Seattle gets a lot more housing built.

Real backers of inclusionary housing recognize that such requirements must be set  “well below the level that might negatively impact the supply of land for housing.” Some YIMBY’s believe any such laws impose an economic burden on developers that prevents housing from being built. They reason that if inclusionary percentages are set to high for projects to pencil out, then zero affordable units are built and the goal of diversifying neighborhoods is not met.

I strongly disagree with such opponents of inclusionary housing. Yet while YIMBY’s who oppose inclusionary laws are attacked for not supporting this  affordable housing tool, I have never seen any YIMBY urging  the Planning Commission or Board of Supervisors to reject a project because the inclusionary percentage was too high.

To the contrary, YIMBY’s and other pro-housing activists consistently turn out to hearings to support projects that include the legally mandated inclusionary housing.

In contrast, many activists who claim to support inclusionary housing routinely oppose projects despite their meeting the city’s inclusionary requirements.

So who are the real friends of inclusionary housing? Those who support the market rate housing that provides the chief if not sole access for working and middle-class residents to live in high-opportunity neighborhoods? Or those who oppose such projects when they come before public bodies, ensuring that working and middle-class residents are forever priced out of these communities?

San Francisco’s next mayor must work to solve San Francisco’s inclusionary housing mess. And while there will be pressure to lower inclusionary rates to stimulate housing, I suggest starting by restricting supervisors and planning commissioners from extracting money from housing developers beyond existing law.

San Francisco already has a charter provision barring supervisors from interfering with the administrative operations of government. Applying that provision to preventing supervisors from communicating with Planning Commissioners about exactions on top of the inclusionary requirement is consistent with the charter’s limitation on their power.

San Francisco can learn a lot from Seattle about expediting its housing approval process and reducing costs. Preventing politicians and political appointees from shaking down additional payments for projects compliant with zoning laws is a good place to start.