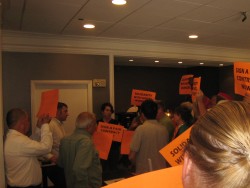 San Francisco’s small, fashionable Hotel Frank is strategically located in the center of downtown just around the corner from two world-acclaimed theatres, the Curran and ACT. But no one imagined the chic hotel that advertises itself as “hip” and “liberating” would itself stage a performance that has people clamoring outside in ticket lines.

Oh, my mistake, I meant picket lines. Pickets did indeed start up at the Hotel Frank after new management, Provenance, unilaterally announced in May 2010 the cancellation of all union contracts at both the Frank and its sister among the so-called boutiques, the Hotel Metropolis. This was a stunning announcement.

Provenance was actually hired by Wells Fargo, Trustee of the foreclosure of the Hotel Frank and Metropolis when the previous owners, pretty shady characters themselves as we shall learn, made a series of incredibly stupid business decisions that are still disdainfully ridiculed in business circles.

However, it is absolutely clear that labor protections were in effect at both hotels since day one of doors opening several decades ago. Nonetheless, Provenance, with Wells Fargo backing, declared the total union workforce of around 60 would henceforth be considered new employees.

A hotel employee described to me that “within hours of the foreclosure sale, Provenance staff marched into our hotel and announced that we were working an extra half-hour per day for free; that nobody had medical coverage, sick leave, holiday pay or vacation pay any more. They significantly upped the number of rooms that the hard-working room cleaners had to clean, even if it meant skipping their breaks and meal periods; they cut back on staffing at the front desk while seriously increasing their workload and, to top it off, generally made themselves obnoxious.”

But though Provenance may think the curtain will not rise again, workers believe it is just a long intermission.

In fact, UNITE HERE, Local 2 union employees called for a boycott and approved a possible strike of the two hotels by a 93% margin in July. Protests regularly occur while employees remain on the job.

In fact, the union has now expanded their well-organized boycotts to ten hotels since contracts expired in August 2009 at 62 San Francisco hotels and the union just began today, October 13, a six-day strike of the Hilton, the city’s largest hotel. As owners continue to stall negotiations and increase pressure on the workers, Local 2 is responding.

For example, an impressive number of employees showed up on September 29 in front of the Hotel Frank to emphasize how serious they are about the abrupt and dramatic changes that have so rapidly altered their lives. “Nearly half of the workers at the hotel were on the picket line outside our entrance,” observed bellman Marc Norton who did not attend because he was working at the time.

But everything got worse in September when management at the Hotel Frank got stage jitters and fired two leading union members several weeks apart from each other.

The Hotel Frank, formerly the Maxwell Hotel, was actually renamed by the previous owners for Frank Lembi, one of San Francisco’s largest and most disreputable realtors. The San Francisco Bay Guardian ran a three-part award-winning series in 2006 noting innumerable lawsuits against him from aggrieved tenants and from the San Francisco City Attorney. The editors scornfully dubbed him “scumlord.”

Now in his 90s, his legacy appears safe in the hands of Wells Fargo and Provenance.

The first boycott activist to get fired at the Hotel Frank was respected for his union advocacy. He also enjoyed an absolutely unblemished work record.

Nonetheless, this union leader was abruptly terminated for an petty infraction that would have normally only warranted an oral counseling. Several weeks later on September 30, in an equally capricious act, Provenance terminated 12-year experienced bellman, Marc Norton, because he allegedly did not know how to perform his job.

Local 2 considers the firings to be complete fabrications and is appealing to the National Labor Relations Board for full reinstatement and back pay. Both workers are confident facts will win out over Provenance’s fictionalized account.

What management did not acknowledge is that the day before Marc’s termination they were extremely embarrassed by so many workers picketing outside the hotel entrance in full view of the “hip, urban and fashionable” upscale tourists targeted as its niche market.

Workers were curious about one particular person who stood aside taking lots of photos of the picket line that day. He turned out to be one of the potential buyers of the Hotel. It has been on the market. No surprise, Wells Fargo is looking for a quick turnaround speculative investment.

“I’m sure this financial suitor waved around photos of our picket line to whittle down the asking price,” Norton observed with some satisfaction.

Local 2 leaders have often reminded hotel owners that making a fair settlement is far more economical to their bottom line than enduring a long and sustained boycott, periodic strikes and innumerable picket line actions. But owners are willing to spend money now if they can reasonably expect to deal the union a setback that will temper demands in future bargaining.

But taking Local 2 down a few notches is something that has been unsuccessfully attempted before in San Francisco. The Local ultimately won a complete victory in 2006 after a vigorous 2-year boycott followed a bitterly fought 53-day strike and lockout. Union members project the same determination this time around.

For example, over a dozen San Franciscans entered the Hotel Frank lobby on October 13 to express to management support for a fair contract with health benefits and calling for a reversal of the two terminations. The delegation included Sister Bernie Galvin and several other religious figures along with community organizations such as Pride at Work, Jobs with Justice and Single-Payer Now!

An assistant manager of the hotel looked very uncomfortable as he got an earful with “Sign a Fair Contract Now!” solidarity signs prominently displayed in his own lobby with curious guests coming in and out.

“Community involvement so far shows the potential of our boycott as we continue to seek public support,” emphasized Norton.

“The largest picket we have had up to now was on October 5, partially in response to my firing. One travel agent stopped by to speak with us very sympathetically. She always books her clients at the Hotel Frank she told us but that she would absolutely not do so in the future. ‘Who wants to have clients walk through a picket line?’ she exclaimed in support of us.

Carl Finamore is a delegate to the San Francisco Labor Council, AFL-CIO. He was part of the delegation that visited the Hotel Frank on October 13 and will also be, along with other “hip and urban” San Franciscans, at the next picket on October 21 beginning at 4:15pm. He can be reached at local1781@yahoo.com