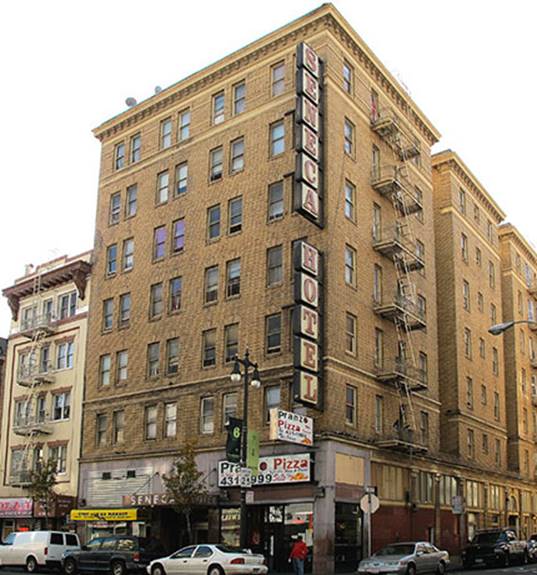 Some Seneca Hotel units have lacked referrals for nearly 6 months

What changed? At the end of 2018 San Francisco began an Adult Coordinated Entry program. As described by Episcopal Community Services, the nonprofit operating the city program, “Before ACE was launched, San Francisco didn’t have a comprehensive, easily accessible way for people experiencing homelessness to get the resources they needed. To navigate the system and access the right solutions, clients often needed more help from case managers, or it fell more heavily on clients to perform their own research and advocacy. That can be a challenge for people struggling to meet their basic day-to-day needs ⁠— especially if they have physical or mental health issues.”

Sounds good, doesn’t it? But a strategy designed to make it easier for the unhoused to access services has become a major roadblock to reducing homelessness.

Coordinated Entry sounds great. Here’s how it plays out in the real world.

The Tenderloin Housing Clinic (THC), which I head, has leased hotels for the unhoused since 1999. For nearly twenty years we had no problem with referrals. Once a case manager at a shelter determined a person was ready for housing, they got a referral to our office and would soon be housed.

This referral process may not have been “coordinated, ” but it efficiently got people housed. The current system does not. Our most recent report has 71 ready to rent vacancies, a number unchanged in the past two weeks.

At best we get five referrals a week. Some weeks we get none. Some rooms have sat empty for nearly six months without a referral.

This is not a pandemic caused problem. Nonprofts began raising vacancy concerns to the city’s Department of Homelessness and Supportive Housing (HSH) in 2019, not long after coordinated entry began. Although HSH has repeatedly pledged to end the roadblocks to referrals, the vacancy problem and lack of referrals has steadily worsened.

Why have referrals not increased? Because the problem is systemic. And the system is broken. This is not about ECS not doing its job. It’s about a referral system that fails the unhoused population.

For nearly twenty years there was not a vacancy surplus under one system of referrals yet there has been a consistent surplus under coordinated entry HSH recently offered various explanations for the sharp rise in master leased vacancies. They include:

But here’s the problem with HSH’s explanations: THC has not added any new barriers to its intake process. We regularly track vacancies and send vacancies to HSH. And the high number of “offline” units are irrelevant when hundreds of “online” units sit vacant (far fewer units would remain offline if the city funded the additional maintenance workers necessary to repair them).

None of the factors cited by HSH offer an alternative explanation for the steep vacancy rise since Coordinated Entry began.

Of course people will stay in the SIP hotels until FEMA funding is pulled, which is not expected to occur until September. Why would a formerly homeless person leave a better situation now?

But there’s roughly 5000 unhoused not in SIP hotels who desperately desire housing. San Francisco’s master lease program succeeded by offering a better option than sleeping on the street or in shelters. If the city offered housing units to those in navigation centers or “safe sleeping encampments” and allowed them to bypass coordinated entry, the city’s vacancy problem would quickly end..

Some believe the city is keeping master lease units vacant so that permanent housing is available for SIP residents when  FEMA funding ends. But that also makes no sense. Prop C enables the city to house all 2000 SIP residents through a combination of vacancies in existing supportive housing and via acquisition of new hotels.

Where is the Outrage?

I would expect more public outrage over the city keeping people on the street while it pays rent on vacant hotel rooms. True, people are focused on their own health and that of their families. And on school and business reopenings.

But keeping people unhoused while paying for vacant hotel rooms is inhumane. It is also bad for the city’s budget. The city’s lack of referrals has played havoc with  nonprofit budgets as revenue projections fall far short.  Nonprofits have no choice but to ask the city to make up for the lost funds.

San Francisco should suspend coordinated entry until all master lease vacancies are filled. A public hearing at the Board of Supervisors on the city’s homeless referral process must precede coordinated entry’s resumption.

Don’t allow talk about SIP referrals and the pandemic to confuse the issue: coordinated entry sharply reduced referrals by the fall of 2019. The correlation between this new referral process and sharply rising vacancies is clear.

The Supervisors Budget Committee will be discussing the vacancy issue and others at its February 24 meeting at 10:30 am.. Chair Matt Haney and Vice-Chair Ahsha Safai have been outspoken about housing the unhoused; there is strong Board support to pass an ordinance  reversing HSH’s policy of prioritizing  if not restricting referrals to SIP hotel residents. HSH plans to submit a vacancy reduction plan to the Board prior to the hearing; but unless it changes coordinated entry this “reform” will be no more successful than those in the past.

I don’t know if Coordinated Entry is salvageable. But I do know that San Francisco cannot reduce homelessness without returning to the more expedited referral processes of the past.