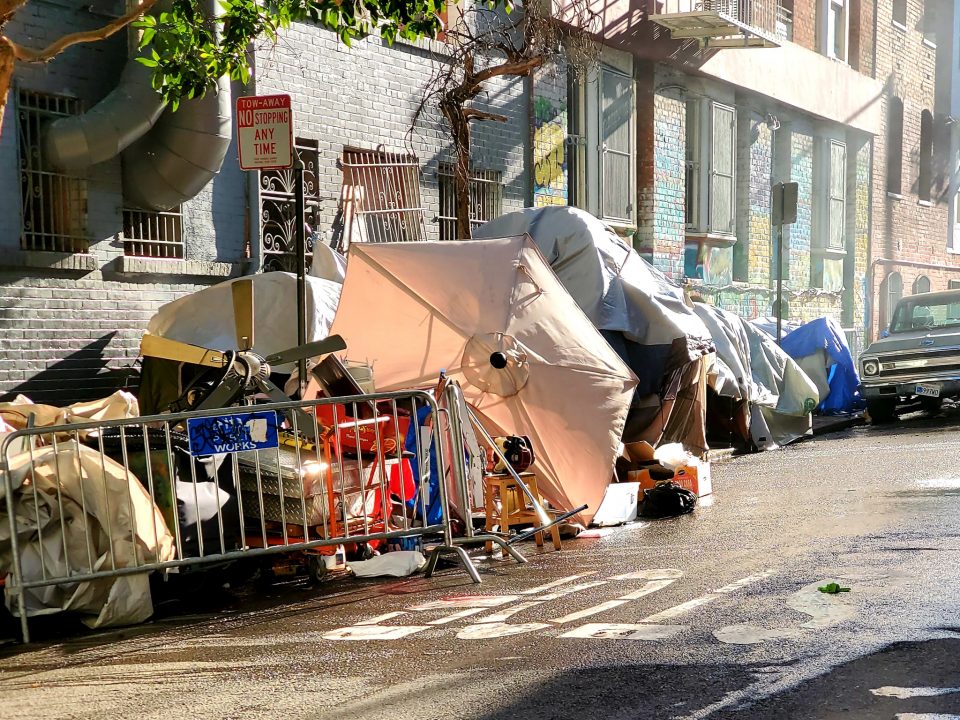 Mayor Breed has gotten well deserved national praise for her early issuance of shelter in place orders. But the other part of the media narrative—that San Francisco’s COVID19 policies are set by health care professionals—deserves scrutiny. Specifically, San Francisco is openly violating Center for Disease Control (CDC) protocols and its own Department of Public Health guidelines in a 20,000 person neighborhood only blocks from City Hall.

A place called the Tenderloin.

I have written many stories about the city’s refusal to enforce social distancing requirements in the Tenderloin. Yet city inaction continues. As does City Hall’s violation of its own mandated health procedures, as well as those from the CDC.

On Friday, April 24 there were 342 tents on Tenderloin sidewalks. A new high. Here’s some photos from Sunday.

What does it say about a city that ensures social distancing protections in affluent neighborhoods while increasing health risks in the low-income Tenderloin. Tenderloin residents cannot leave their apartment buildings or SRO hotels without passing unmasked strangers in tents on the adjacent sidewalk. Going out to buy food, get exercise, or attend a medical appointment puts their very lives at risk.

“Encourage people staying in encampments to set up their tents/sleeping quarters with at least 12 feet x 12 feet of space per individual.”—Centers for Disease Control, Guidance for COVID-19

Most people only know about the six foot social distancing requirement. But according to federal and local health guidelines those camping in the Tenderloin or elsewhere should be spaced twelve feet apart.

And in case you think that the San Francisco Department of Public Health is not aware of the twelve foot spacing requirement for campers, here’s its own March 31 Shelter in Place Order : “(4) In addition to continuing to urge government agencies to provide shelter for individuals experiencing homelessness, the Order urges government agencies and other service providers to take steps to protect that population, including requiring social distancing in shelters and other facilities, providing hand sanitation for individuals who remain unhoused and ensuring 12 feet x 12 feet distancing for tents in encampments.” (Emphasis added).

Let this sink in.

San Francisco has allowed 342 tents to be crammed into one of its densest neighborhoods. This despite this violating national and local social distancing protocols. City Hall dispatches police to ensure social distancing at beaches and parks but when it comes to providing a minimum mandated twelve foot spacing for tents in the Tenderloin—essential for protecting neighborhood residents—it does nothing.

The Tenderloin is a place that over 20,000 people call home. And City Hall gives them less protection than visitors to beaches and parks.

San Francisco’s disregard for medical expertise is even more blatant. The CDC guidelines require that cities provide handwashing stations and portable latrines for encampments of 10 or more. None of these have been provided for Tenderloin encampments. Nor, as of Friday, were they provided for the larger encampments that have opened the Fulton mall, along the State Building on McAllister, and the corner of Larkin and McAllister.

Why So Many Tents?

Tents keep increasing in and near the Tenderloin because the city closed off access to shelters. Here’s what the CDC guidelines say about this: “homeless shelters should not close or exclude people who are having symptoms or test positive for COVID-19 without a plan for where these clients can safely access services and stay.”

San Francisco had no plan when it announced the shelter shutdown. And it still doesn’t have a formal plan that ensures at risk homeless individuals denied shelter access have a place to “safely access services and stay.”

San Francisco does have an informal plan for people denied shelter access: allow them to camp on Tenderloin sidewalks. That’s the city’s plan in a nutshell. And considering it is City Hall’s plan to transform the Tenderloin into a neighborhood where families with kids, seniors, disabled persons and other vulnerable residents face grave risks trying to avoid contracting COVID19,  the city seems  to be meeting its goal.

On a weekly call set up by D6 Supervisor Matt Haney last week, the Department of Public Health said it was unethical to provide comprehensive testing without a plan for what to do if the test comes back positive. But it also said they aren’t testing campers because they have nowhere to put them while they wait for test results or if the test results come back positive. The Department of Homelessness & Supportive Housing (“HSH”) said on the call that they do plan to do testing but that people will remain in their tents even if the tests come back positive.

In other words, an unhoused person not only runs a higher risk of contracting the virus but will remain in a Tenderloin tent even if they test positive. And since the city imposes no social distancing on tents, the city’s actual plan imposes extreme health risks to Tenderloin residents and workers. As well as to campers themselves.

Last Friday, Fulton Mall had approximately 100 tents. There were over fifteen tents a block away at Larkin and McAllister. These encampments had no spacing between tents in virtually all instances, and no hygiene facilities for handwashing, restrooms, etc.

In other words, a large tent encampment within plain view of City Hall lacks any of the hygiene facilities required by the CDC.

Mayor Breed announced yesterday that the city is closing part of JFK Drive in Golden Gate Park and Shelley Drive in McLaren Park to cars to give people more space. It’s the type of city action that led the Washington Post, LA Times and other to hugely praise San Francisco’s COVID19 enforcement efforts. It’s also the type of action that shows that when the city wants to protect residents, it does.

Unfortunately, it is also the type of action that shows City Hall has no interest in extending even mandated federal and local health protections to the low-income Tenderloin.