San Francisco to Participate in Nation-wide Vigil for Cindy Sheehan 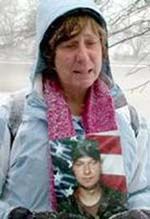 Tens of thousands are expected to participate in candlelight vigils held across America tomorrow in support of Cindy Sheehan. Sheehan, the mother of a soldier killed in Iraq, has garnered widespread attention for camping outside George W. Bush’s home in Crawford, Texas, demanding the President speak to her about the loss of her son. So far, Bush has refused, sparking MoveOn.org to launch a campaign to organize grassroots action on the issue. More than 25 vigils will be held in the Bay Area alone, with San Francisco holding its own at the Federal Building at 7:30 tomorrow evening.

1,829 soldiers have died in Iraq since the beginning of the U.S. occupation, with the growing number speeding up the decline in public support for both Bush and the war. Sheehan’s protest seems to be fanning the flames of discontent, with her simple message of grief over the death of her son Casey and a desire to address the man responsible resonating with more centrist and conservative citizens.

“I want him [President Bush] to tell me why my son died,” Cindy Sheehan has said.

Sheehan’s vigil began after a brief meeting between herself, the President, and several other parents of deceased soldiers. She described Bush’s behavior at the meeting as follows:

“His mouth kept moving but there was nothing in his eyes or anything else about him that showed me he really cared or had any real compassion at all..He wouldn’t look at the pictures of Casey. Every time we tried to talk about Casey and how much we missed him, he would change the subject.”

Stephen McNeil, with the Quaker’s American Friends Service Committee, organized San Francisco’s vigil at the Federal Building in response to MoveOn.org’s call for nation-wide support for Sheehan. Designed to increase public awareness about and support for Sheehan, McNeil says he hopes the event will also help convince people that no matter what their position on the war, there should be a dialogue between both sides.

“The vigil is an attempt to show support for her trying to meet with the presidents,” said McNeil. “While everyone has the right to petition the president, she’s earned the right to speak directly to him through the loss of her son.”

McNeil says he expects between 50 and 100 people at tomorrow night’s event, which will include the lighting of candles to show solidarity with Sheehan. The event will be held at 450 Golden Gate Avenue at 7:30 p.m. For more information, log on to www.moveon.org.