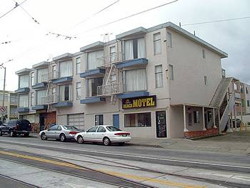 The Beach Motel in San Francisco’s Outer Sunset neighborhood has operated as an illegal tourist hotel for much of the past twenty years. On April 11, it is asking the Board of Appeal to reopen its case so that it can continue tourist rentals in violation of neighborhood zoning. This request should be denied. The Beach has tried every trick possible to operate a tourist business in a neighborhood where such use is prohibited, including provoking turnout at a past Board of Appeal hearing by falsely telling neighbors that the city was trying to convert the hotel into a homeless shelter. If the Sunset district wants the Beach to be tourist it should ask Planning and the Board of Supervisors to change the neighborhood’s zoning to allow tourist and commercial uses – the Board of Appeal is not the vehicle for doing so.

The long-running saga of the Beach Motel’s efforts to violate city laws may come to a head this week – unless the Board of Appeal gives the hotel new life by granting the hotel’s request to rehear the Board’s 1998 decision denying its tourist use. During prior hearings the hotel was given extraordinarily ample opportunity to provide evidence that it was a legal tourist hotel when the neighborhood’s zoning barred tourist uses in 1960 – and yet failed to present such evidence. Now it wants the Board of Appeal to reopen its case, apparently believing that the trail of lies it has offered in the past can get by a new group of Commissioners.

The Beach Motel involves a very simple set of facts. When the city enacted its residential hotel anti-conversion ordinance in 1981, it asked SRO owners to disclose how their hotel was being used in September 1979. The Beach was a 100% residential hotel, yet soon began illegally operating as a tourist hotel.

San Francisco city officials did not do much enforcement of the anti-conversion ordinance in the 1980’s, so the Beach got away with its illegal tourist operation. But that changed when the City amended the law to give non-profits groups standing to enforce it.

The Tenderloin Housing Clinic, which I head, promptly took advantage of our new enforcement rights to file lawsuits against dozens of illegally converted hotels. The Beach did not contest our first lawsuit, with its owner vowing to end his illegal tourist rentals.

But a climate soon emerged in which right-wing judges appeared willing to throw out the city’s anti-conversion law. In fact, a San Francisco federal judge enjoined the law in the early 1990’s and it took more than a year that a unanimous panel of the Ninth Circuit Court of Appeal reversed the ruling and restored the law.

Eager to get their case before a state court of appeal, the Beach openly rented to tourists. This led to separate lawsuits and trials against the Beach by both THC and the City, which forced the Beach to stop illegal tourist rentals – temporarily.

(That court ruling led THC to ask then Assemblymember Mark Leno to sponsor state legislation exempting SRO’s from the Ellis Act. And thanks to extraordinarily hard work by Leno and the unwavering support of then Senate leader John Burton, the measure – AB 1217 – became law in 2003)

There was so much litigation against the city’s anti-conversion law in the 1980’s and 1990’s that many did not realize that, even in the absence of such a law, most SRO’s are in zoning districts that prohibit tourist rentals. That’s why there were no mass conversions after the federal judge temporarily enjoined the law – local zoning laws barred residential hotels from renting to tourists.

So invoking the Ellis Act did not allow the Beach to circumvent the Sunset’s prohibition on tourist hotels. The Beach never had a legal non-conforming tourist use when the Sunset became residential in 1960 – in other words, the Beach has never provided evidence showing that it was a tourist hotel prior to the Sunset imposing a ban on new tourist hotels in1960.

That’s why, absent a zoning change, the Beach cannot legally rent to tourists today. And why there is no point to the Board of Appeal reopening this case.

For all of the Beach’s deceit in stirring up Sunset District hysteria against homeless people, Sunset residents have not rezoned their neighborhood to allow the type of commercial and tourist uses that would allow the Beach to be a tourist hotel.

The Tenderloin Housing Clinic has spent a staggering amount of time since 1990 trying to get the Beach to follow the law. Here’s what happened at the last Beach hearing I attended.

Unlike prior Board of Appeal hearings involving hotel conversions, this one was so jammed with people it required an overflow room. Why? Because the Beach placed flyers under cars within several blocks of the hotel claiming that the Tenderloin Housing Clinic was trying to covert the property to a homeless shelter and that people needed to come to the hearing to prevent it.

Most of the audience came with flyers in hand. Every speaker denounced the city for converting the Beach into a homeless shelter. It got to the point that the chair of the Board announced that there were no plans for any shelter, and asked the crowd to stop raising that issue.

It made no difference. Speakers trusted the flyer more than the Board members, and continued to demand that the Board oppose the nonexistent shelter.

I expect similar shenanigans on April 11. A reporter asking for details on THC’s alleged “project” at the Beach has already contacted me. There is no such project, but it seems like the Beach may well revisit its past strategy of claiming the city will turn the hotel into a homeless shelter.

The irony, of course, is that there is nothing stopping Sunset residents who want to allow tourist hotels in their neighborhood to initiate a neighborhood-wide zoning change. THC is involved solely to make sure that a residential hotel under applicable zoning operates according to the law – something hundreds of other property owners do without question or controversy.

People paid good money to own tourist hotels and should not face unfair competition from the Beach’s illegal operation. Let’s hope the Board of Appeal puts an end to this case and on April 11 rejects the hotel’s request for rehearing.