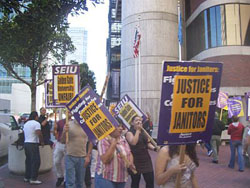 It was once an article of faith among San Francisco progressives that the working class was the driving force for progressive change. But local progressives have largely backed housing policies that ignore unionized workers desire to obtain affordable housing in San Francisco, moving the city further toward becoming a home for only the rich and the subsidized poor.

The problem is this: progressives have continually sought to target public housing assistance to extremely low-income households. This agenda has excluded unionized workers from the benefits of affordable housing programs, since virtually all union members working fulltime in San Francisco earn more than 30% ami ($23,350 for family of three), and the vast majority earn above 50% of ami ($38,950 for three-person household).

And if a San Francisco union member has a partner that also works—-a rather common occurrence—-their combined income would typically exceed $77,850, which is 100% of ami.

Housing activists fought for years to ensure that San Francisco’s housing programs benefited those of lower incomes, and largely succeeded. But just as this battle was being won, three factors changed the underlying assumptions.

First, after rapidly increasing for years, the city’s adjusted median incomes have declined.

Second, Mayor Newsom’s prioritization of housing for homeless persons poured significant new money into units for extremely low-income single adults. Care not Cash alone spends $15 million annually on housing this population, and when the Direct Access for Housing ($5 million) and other programs are added, the argument that this population does not get its fair share evaporates.

For example, when median incomes were steadily rising, many activists sought to reduce the commonly used 80% of ami to 60%. But 80% of area median now applies to a single person earning only $48,450, and the 60% figure, which has become the new ceiling for many rental assistance programs, cuts off aid to single persons earning over $36,350.

The 60% figure disqualifies nearly all fulltime unionized city workers from receiving rental assistance. And a nonprofit unionized SEIU janitor working in an SRO earns more than the 30% of the city’s ami, which is the income ceiling slated to receive at least 40% of the money authorized by the proposed housing set aside charter measure.

When a unionized janitor working in a Care not Cash hotel is considered too affluent to get assistance, San Francisco’s housing priorities are clearly on the wrong track.

On October 19, Mayor Newsom announced an example of two such plans, They are known as the Teacher Next Door and Police in the Community programs

Conceived by the Mayor’s Office of Housing, both programs offer $20,000 loans for downpayment assistance that do not have to be repaid if teachers stay working for San Francisco for ten years, and police officers for five. When combined with the city’s existing downpayment loan program, this additional $20,000 should make a difference in keeping teachers and police officers living in the city.

Those present at the press conference highlighted the importance of promoting stability in the schools, and of having police living in San Francisco in case of an earthquake or other catastrophe. Similar policy rationales apply to other heavily unionized professions, particularly nurses and public hospital personnel.

The combined cost of these two creative programs is $1.7 million, an allocation that was unanimously approved by the Board of Supervisors. As the city moves forward to allocate over $30 million annually for housing, a good portion of this amount should go toward expanding the police and teacher programs to other unionized professions.

Imagine if San Francisco actually put forward over another $10 million annually to help keep unionized nurses, social workers, MUNI staff, and hotel workers living in the city!
The city would be the talk of the nation, and San Francisco would become a national model for housing policies that preserve the working-class.

This does not have to be an unrealizable dream: Daly’s housing set aside can make this a reality.

If it were up to me, I would allocate nearly all of the set aside for keeping union families in San Francisco. Because progressive politics in this city will not survive if unionized workers do not have kids in our schools, do not ride Muni, and are not impacted by local tenant protection measures.

Many working families suffer from the city’s lack of affordable homeownership opportunities, and so few market-rate condos are two or three bedroom units that the development boom has done little to increase below-market units suitable for families with children. While this problem does not uniquely impact union households, these families are more likely to want to stay in San Francisco and to pursue affordable housing options.

Currently, there is no incentive for developers to build family housing. Creating such incentives through allowing additional height or density could dramatically reshape San Francisco’s inclusionary housing program into one that prioritizes families.

Key to the creation of the teacher and police housing programs was union support; the police agreement was even included in the union’s MOU with the city. Now other unions must focus on helping their members stay in San Francisco, and getting money in the proposed charter amendment for union worker housing assistance is a great place to start.

Unlike Los Angeles and San Jose, San Francisco’s labor movement has not made housing development a top priority. These other cities lack San Francisco’s infrastructure of progressive housing groups and activists, requiring unions to take on a leading role.

But the goal is the same. San Francisco’s fabric depends on union households, and the city’s future is imperiled by their continued displacement.